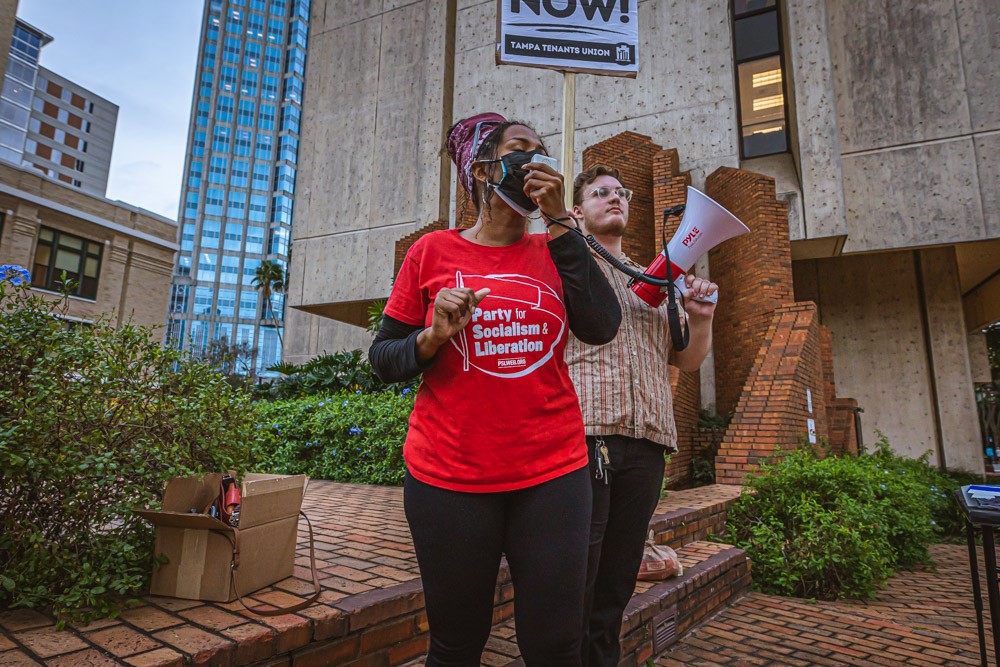 Tampa’s Housing Crisis And The Fight For Rent Control

Tampa, Florida – The Tampa community has struggled for an end to the housing crisis since the eviction moratoriums ended last year. With this year’s midterm elections approaching, Tampa activists demand a rent control ordinance to stop the rise in rent prices. Enough public support can push the Tampa city council to address the housing emergency.

Tampa is among the cities facing the worst of the national housing crisis. Tampa ranks ninth worst in the world for decrease in housing affordability. Renters in the city spend 42% of their income on housing, a 6% increase from 2017 during a time of rising inflation and stagnant wages. In 2022, affordable housing listings decreased by 46% while housing prices increased by 26%. More people in Tampa are at risk of losing their housing.

As the housing crisis worsens, community groups have united to demand housing for all. People’s Council Tampa, a coalition of Tampa activists and concerned residents, was launched on January 5 to stop rent increases and evictions. People’s Council Tampa and many community groups demanded that the Tampa city council pass a Tenants Bill of Rights. Later, they demanded the city also declare a “housing state of emergency”, which would help pave the way for a rent control ordinance.

The Tampa city council had its first reading of a Tenants Bill of Rights on January 13, with a majority of council members in support (6-1). The bill contained anti-discrimination measures and required giving tenants a list of resources. At the second reading on February 3, many council members flipped their vote to be against the bill of rights (4-2) after emails from local landlords and lawyers. The backlash against the council’s rejection of the Tenants Bill of Rights was strong enough for the city council to flip again, and they voted in favor unanimously on February 17.

Seeing the efficacy of public support, People’s Council Tampa and a dozen other groups agreed to mobilize to the next city council meeting on February 24 and demand Tampa declare a “housing state of emergency.” Over 100 people attended, with 50 speaking on the need for rent control to stop the housing crisis. While the city council did accept there was a “crisis” at that meeting, members rejected the idea of a rent control ordinance.

Although the fight to pass a rent control ordinance was not over, more issues with the city council emerged. Councilman John Dingfelder resigned in March as part of a public records lawsuit. Weeks later, Council Chair Orlando Gudes faced a hostile work environment lawsuit and immediate pressure from Mayor Jane Castor to resign. Gudes stepped down as council chair in response but is still a council member – for now. Mayor Castor’s administration is in charge of prosecution in both lawsuits. In Gudes’ case, the Castor administration was aware of the allegations in 2020 but did not pursue legal action until the end of 2021. Castor’s administration also revealed the accuser’s identifying information in a statement about the case. Both lawsuits have increased hostility between the mayor and city council.

Another part of this division is Mayor Castor’s public and firm rejection of rent control, a contrast to city council’s more receptive stance. The Coincidentally, Castor receives a large part of her PAC funds from landlords and developers. While Tampa city council at first voted against the Tenants Bill of Rights after landlords objected, they did pass the bill weeks later.

Despite Mayor Castor’s anti-rent control stance and city council controversy, a rent control ordinance is still possible. To replace Dingfelder, city council chose Amanda Lynn Hurtak, who has stated that her main concern is addressing the housing crisis. City councilmembers like Gudes have voiced support for rent control in the past. If five members of the city council vote in favor of rent control, the ordinance would automatically pass with the mayor unable to veto it.

The Tampa community is responsible for the Tenants Bill of Rights and an ordinance requiring six months’ notice for rent increases, although these are concessions from city council instead of the main demand of rent control. These concessions are not a sign to give up on solving the housing crisis, but encouragement to work even harder. Tampa city council can pass a rent control ordinance with enough community support.

Freedom Road Socialist Organization’s May Day Rally for Housing is part of this struggle to get housing for all. As midterm elections approach, protesting for an end to the housing crisis with rent control is necessary to build massive public support. If a large part of the Tampa community demands rent control and nothing less, the Tampa city council would have no choice but to act.