Above photo: Provided by the author.

In Lidda, in Ramla, in the Galilee,

we shall remain
like a wall upon your chest,
and in your throat
like a shard of glass,
a cactus thorn, and in your eyes
a sandstorm.

The events of the 1976 Palestinian Land Day came after the confiscation of thousands of acres of Arab land within the boundaries of populated areas under the cover of a Galilee Development Project.  The main goal was the Judaization of Galilee and the triangle areas particularly (the villages of Arrabeh, Deir Hanna, and Skhnin), as well as the Negev desert.  This led the Palestinians to declare a comprehensive strike.  Large Israeli army forces were ready inside the Palestinian villages attacking and injuring many Palestinians.  Palestinians also organized numerous demonstrations in defense of their land which Israel met with repression. 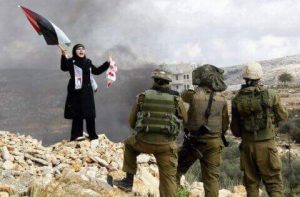 Thirty-six-year-old , Tasaheel Burnat is a Palestinian activist from the village of Bilin near Ramallah in the West Bank.

Together with her husband Iyad Burnat and their five children, they’re considered conductors of the popular resistance in Bilin.

In 2004, the occupation confiscated 60% of the village land in order to build the Separation Wall on the village farmers land removing the olive trees .

Tasaheel said, since 2005 Bilin residents have been engaging weekly Friday demonstrations with international peace activists from all over the world. She is a symbol of Palestinian women who resist the occupation alongside their families . Tasaheel was subjected to violence many times and her husband jailed many times . Three of her sons were arrested when they were under the age of eighteen : Majd was injured , and he is receiving medical treatment in Turkey , Abed Al Khaliq is injured and is in prison , Muhammad was injured and jailed but was release after paying a fine. Mayar and Mohee Aldeen are very young but demonstrating with the family and villagers . Resistance is a part of the Burnat family life, and even though their house , like many other houses in Bilin, is targeted for nightly raids by Israeli soldiers , she and her family will not give up their right to protect their land and way of life .

Tasaheel Burnat , remains optimistic that the occupation is about to disappear from our beloved Palestine on the heels of the stories of the Palestinians’ steadfastness (Sumud).  The confiscation of Palestinian land has not ended yet, and the Israeli policy of uprooting and displacement attempts to stifle the future of Palestinians.  Palestinian Land Day has become a national Palestinian day.  Palestinians commemorate this day with protests, vigils, chanting Palestinian anthems that demonstrate steadfastness, and raising slogans calling to end land confiscations and Israeli settlements.

Wasan Abu-Baker is an American Activist with a Palestinian Origin. She is the Vice Chair of Corpus Christi National Justice for our Neighbors and a staff writer for Kings River Life Magazine in the US. She writes about Palestine, Islamophobia, and Education. She is an educator and earned her MA from St. John Fisher College in Rochester, New York.