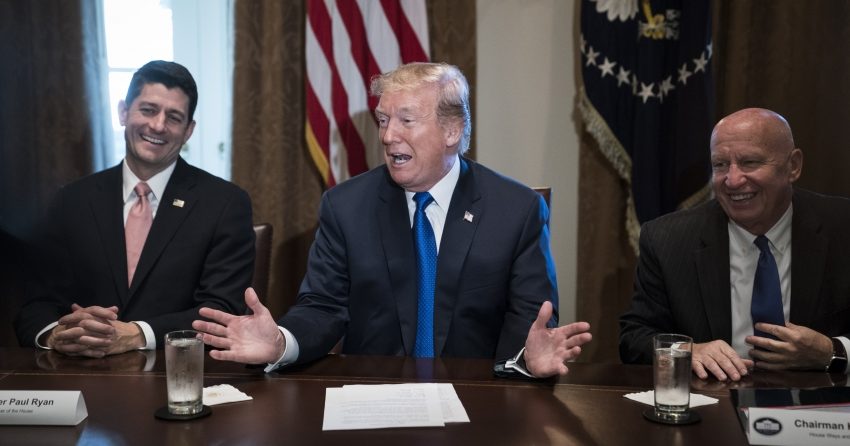 Above photo: No real democracy can coexist with such a system of unchecked economic power. (Photo by Jabin Botsford/The Washington Post via Getty Images)

Republicans just sold out the poor and middle class to enrich the wealthy elite. Next year is an opportunity to take back what’s rightfully ours.

NOTE: We agree with the author that the new tax law ought to further people’s outrage and commitment to mobilize. We’d like to add that the Democrats are likewise to blame for the current economic inequality and austerity. Our situation did not arise overnight, but was brought about by decades of neo-liberal policies and increased security state spending championed by both wings of the corporate duopoly. This must be kept in mind as we organize. To succeed, our actions must be independent of the corporate parties.  – KZ and MF

The American economy is about to undergo another shock. Yet this time there will be no bursting bubbles, oil crises or collapsing financial institutions to blame.

The current economic status quo—with stock markets soaring while wages remain flat and inequality widens—is both unstable and unsustainable. The coming shock will only accelerate these trends in order to benefit the wealthy, and it’s being delivered in the form of tax “reform” by a Republican Party dead set on pleasing its donor class while hanging working people out to dry.

As many economists have pointed out, at its core, the GOP’s tax bill represents a massive transfer of wealth from the bottom of society up to the top. The rich will benefit enormously, while half of all taxpayers will actually see their taxes increase over the next ten years. The top 1 percent will see a full 83 percent of the gains.

This bill isn’t just another giveaway to the wealthy elite like previous Republican tax plans: It’s a direct assault on the people who actually create the goods and offer the services that make our society run. In other words, it’s a new front in the class war.

As writer and activist Naomi Klein explains in her book The Shock Doctrine, true believers in the market-obsessed ideology of neoliberalism have long pushed for a “corporatist” economic system. “It’s main characteristics are huge transfers of public wealth to private hands,” she writes, “often accompanied by exploding debt, an ever-widening chasm between the dazzlingly rich and the disposable poor and an aggressive nationalism that justifies bottomless spending on security.”

Such is the form of shock President Trump and Republicans in Congress are attempting to inflict with their newly signed tax bill, a dream come true for the Robert Mercers and Sheldon Adelsons of the world.

Under this bill, corporations will see their taxes slashed from 35 percent to 21 percent, fulfilling a longtime Republican policy goal. Multinational companies that already evade taxation by shoring their profits overseas will be rewarded with a new tax rate as low as 8 percent—while also avoiding paying full taxes on future profits they claim to earn abroad.

Owners of certain so-called “pass-through” businesses—including private real-estate firms like the type President Trump has a stake in—will be able to take a 20 percent deduction for the income they receive from their companies. As International Business Times reports, this giveaway could personally benefit both Republican leaders and real estate tycoons.

At a time of skyrocketing corporate profits and massively unequal growth, the same companies that have hollowed out working-class communities by shuttering factories and moving jobs abroad will make out like bandits. And the poor and middle class will pay the price.

In addition to the tax increase they’ll face down the road, low-income families also stand to lose up to $19 billion over the next decade due to changes in how inflation is calculated. The repeal of the individual mandate on health insurance will result in a 10 percent increase in premiums for those who are insured. And it will mean that 13 million Americans will most likely drop their health coverage. As a result, many of these people will forego necessary treatment, almost certainly leading to serious illness and premature death for countless Americans.

At the same time, the bill will increase the deficit by $1.4 trillion, proving yet again that Republicans don’t actually care about ballooning government costs when they serve to enrich their affluent friends and campaign contributors. In practice, this deficit-inflating tax bill is just the first step in a much broader plan to hack away at social welfare programs including Social Security, Medicare and Medicaid. Paul Ryan, Marco Rubio and other leading Republicans have already admitted as much.

Even without these additional cuts, the current bill is set to lead to a 4 percent cut to Medicare, which would prove devastating to seniors who rely on the program for their health care. The bill’s elimination of state and local tax deductions will further serve the interests of the wealthy while making working people pay more—and could cause cuts to vital public services.

The disastrous effects of this bill on working Americans will be felt for decades to come. Corporations will be able to pocket more profits while the super rich are allowed to pass on even more of their grotesque levels of wealth to their children—all without having to pay into the social compact. These heirs to opulence are the true winners in the new tax regime.

The loss of public funds, meanwhile, will be used as justification to slash the social safety net. And the rationale for the entire scheme will once again be proven a mirage.

Corporations are already sitting on record profits and still aren’t investing. The idea that if the government just lets them keep more of their money these masters of capital will suddenly change course is nonsense. Instead, the wealth gap will continue to swell, income inequality will worsen, and the grip of homegrown oligarchs over our democracy will grow ever stronger.

The effects of this shock will be deep and far-reaching. But the class war has two sides. Republicans have put their stock in a bill that is both unpopular and will hurt the very voters who make up the party’s base. Polls show that nearly two-thirds of Americans believe the bill was written to benefit corporations and the rich.

At a time when voters are embracing a populist mood, rejecting corporate influence over government and electing progressive—and openly socialist—candidates, this bill presents an opening to push for a real alternative to the shock of an entrenched corporatist system.

The super rich have shown that they want it all, and won’t give an inch without a fight. Next year’s elections are an opportunity to show what that fight could look like.

Sixty-five percent of Americans believe that corporations already pay too little in taxes, so why not demand they pay much more? And three quarters think the rich should be taxed at a higher rate, so how about running on a platform of taxing the hell out of the 1 percent? And that’s just the start of what a progressive tax agenda could look like. Candidates could demand that the government hike the inheritance taxrather than reducing it, institute a financial transaction tax and sharply increase taxes on capital gains.

What could be done with the windfall from such tax revenue? The United States could move toward making college tuition-free, initiating a Medicare for All healthcare system and fully funding broad-based social welfare programs such as food stamps and child care. These are the kind of bold, universal policy ideas that would mark a clear break with both the market fundamentalism that undergirds the GOP tax bill and the tepid means-testing approach favored by many corporate Democrats.

This kind of left economic agenda won’t come about on its own. Movements have recently taken to the streets in towns and cities across the country to voice outrage at the Republican tax plan. And the bill is already being used by Democrats to paint Republicans as out of touch and too aligned with the wealthy. But to build momentum behind a redistributive tax policy, those disgusted with the GOP’s latest legislative gambit will have to join together to demand that corporations and the rich pay far, far more.

The people who hold the most wealth and economic power in our society do so only because they are allowed to hoard their riches and profit from their investments without meaningful checks on their gluttony. No real democracy can coexist with such a system of unchecked economic power.

This tax bill is proof that the only way to upend the current system and is to take the fight straight to the bank accounts of the rich—and redistribute both money and power.

Miles Kampf-Lassin, a graduate of New York University’s Gallatin School in Deliberative Democracy and Globalization, is the Community Editor at In These Times. He is a Chicago based writer. miles@inthesetimes.com @MilesKLassin