Tax Bill’s Cost Could Hit $2.2 Trillion Over Next Decade

The Republican tax bill is loaded with expiring provisions and delayed tax increases that help it comply with budget rules but hide its likely real cost; if policymakers down the road don’t let these provisions take effect, as leading Republicans say they prefer, the bill’s cost would be about $2.2 trillion over the first decade (2018 to 2027) — or almost 50 percent more than the Joint Committee on Taxation’s (JCT) official cost estimate of $1.5 trillion. The final bill relies even more on these sunsets and delayed tax increases than previous versions of it. That’s not surprising, given that House-Senate negotiators were, according to Senator Ron Johnson, “literally trying to squeeze about $2 trillion in tax reform into a $1.5 trillion box.”

Congressional Republicans chose to use a special fast-track budget process known as “reconciliation” for their tax bill. Under reconciliation, the bill only requires a majority vote to pass the Senate, rather than the 60 votes that most legislation requires, allowing the GOP majority to pass it with no Democratic votes. But this process imposes two constraints on the bill’s official cost. First, it can’t cost more than $1.5 trillion between 2018 and 2027, the limit that Republicans set in their 2018 budget resolution. Second, it can’t increase the deficit in any year after 2027 (which derives from the Senate’s Byrd rules, named after former Senator Robert Byrd.)

Republican leaders then chose to make the bill’s corporate tax cuts permanent, which costs far more than the revenues that the bill raises through its other tax changes. So, to achieve those permanent corporate tax cuts within the budget rules, the bill:

These maneuvers reduce the bill’s official cost over the decade by about $700 billion, allowing it to meet the budget rules. Their effects are particularly concentrated late in the decade; in fact, the agreement would raise revenue by $32 billion in 2027, JCT estimates. But as the graph shows, without these provisions, the bill’s cost would continue rising late in the decade, which may better reflect the bill’s long-term impact on the nation’s finances. 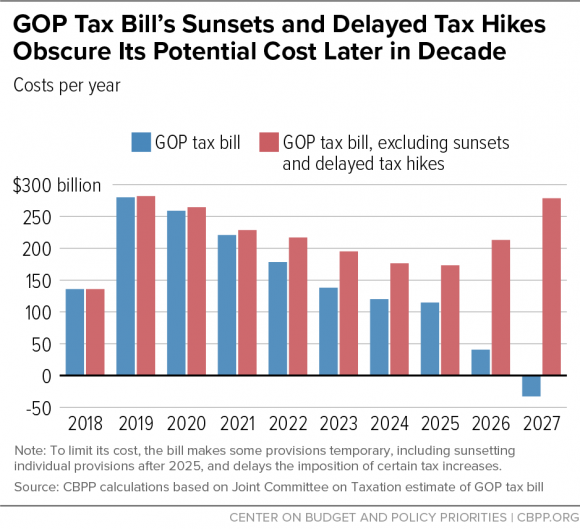 Further, one of the bill’s largest corporate revenue-raising provisions — the so-called “repatriation” provision — is temporary. U.S. multinational corporations have roughly $2.8 trillion in foreign profits booked offshore that have never been subject to U.S. corporate taxes because the companies haven’t brought them back (or “repatriated”) them to the United States. The bill would impose a one-time tax on these foreign profits as if they had been repatriated, raising $339 billion over the decade (about 15 percent more than either the House- or Senate-passed bills had proposed).

But because it’s a one-time tax and applies only to the current pool of foreign profits, it only raises revenue through 2026. So, while it helps offset the cost of the permanent corporate tax cuts over the first nine years, it can’t pay for any of their ongoing cost after that.

The bill’s supporters have typically dismissed concerns about its high cost, often making unsupported claims that the bill would generate so much more economic growth that the resulting additional federal revenues would fully offset the bill’s cost. But every credible analysis shows that the bill won’t come close to paying for itself. And it will cost even more than the official estimates indicate if, as the bill’s supporters favor, its sunsets and delayed tax increases never take effect.