Tax Cut That Benefits Sen. Corker Was To Get Votes For Passage

This provision undermined one of the seeming goals of tax reform, to encourage job creation by giving a large tax break to businesses that do not hire employees. Sirota adds: “Earlier this month, Corker cast the lone Republican “no” vote on the Senate version of the bill, which did not include the provision, but instead created a 20 percent deduction on income from “pass-through” entities, such as LLCs and S-Corps, that pay out wages to employees. But Friday, he announced he would vote “yes” on the final reconciled bill, which included the controversial new provision. That provision extended the deduction to income pass-throughs with large property holdings but few or no employees, effectively subverting efforts by Senate Republicans to ensure that the new tax break was limited to businesses paying out wages to employees.”

It is not only Sen. Corker who will personally benefit from the tax bill so will other members of Congress. A list of who would benefit was provided by Sirota. 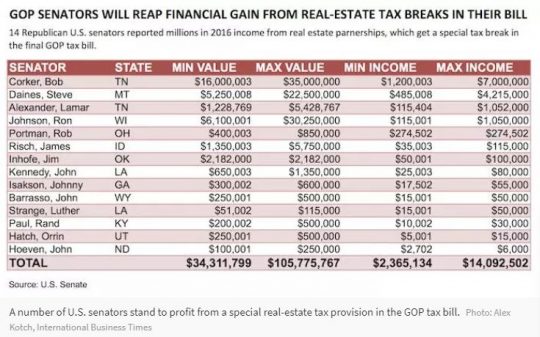 Sen. John Cornyn of Texas, the majority whip, on Sunday said a tax provision, which could personally enrich key Republican lawmakers, was added to the final tax bill as part of an effort to “cobble together the votes we needed to get this bill passed.” Cornyn was pressed about the provision on ABC’s “This Week,” after an International Business Times investigation showed that Sen. Bob Corker of Tennessee suddenly switched his vote to “yes” after GOP leaders added the provision, which could boost Corker’s real estate income. A top Democratic senator, Chris Van Hollen of Maryland, responded to Cornyn’s explanation by saying the language put into the bill also “would be a windfall to Donald Trump.”

As IBT first reported, the provision potentially enriching Corker, Trump and a handful of other top Republican lawmakers, was not part of the House- or Senate-passed bill, but was added by GOP lawmakers to the final bill, which was publicly released on Friday afternoon. Corker, who is not seeking re-election and is considered a crucial swing vote due to his criticism of President Trump, suddenly said he would support the final bill. He initially voted against the original bill in the Senate, which did not have the provision. Corker subsequently asserted to IBT that he did not know about the provision being added to the final bill, and he also declared he has not even read the tax bill he announced he is voting for.

ABC’s George Stephanopoulos pressed Cornyn about the provision after three senior Democratic senators responded to IBT’s report by saying the revelations meant the tax bill must be halted. At first, Cornyn said the criticism of the provision was unfair, declaring: “Picking out one piece in a 1,000-page bill and saying, ‘well, this is going to benefit somebody’ — I just think that takes the whole bill out of context.”

But then Stephanopoulos pressed Cornyn, noting that “this provision wasn’t included in either the House or the Senate bill and apparently was added at the last minute. Why was that done? Why was it necessary to include that provision?”

Cornyn responded: “Well, we were working very hard. It was a very intense process. As I said, the Democrats refused to participate. And what we’ve tried to do is cobble together the votes we needed to get this bill passed.”

Asked specifically if it was added for Corker, Cornyn said: “Well, the particular provision you’re talking about, honestly, is just one piece of a 1,000-page bill which is going to grow the American economy.”

Van Hollen disagreed, telling Stephanopoulos that the language was added in secret, and at the behest of special interests.

“What we do know is they’re behind closed doors,” Van Hollen said. “There are a whole army of lobbyists who were surrounding them, and the longer they’re in there, the more you see these special interest provisions, George, which as you indicate would be a windfall to Donald Trump based on everything we know.”