Tax The Rich? History Proves Alexandria Ocasio-Cortez May Be Correct

Taxes impede economic growth and high taxes kill the economy, right?. This is the belief among many who criticize Representative Alexandria Ocasio-Cortez’s proposal to raise taxes on the wealthy to 70% or more.  But what does the evidence really tell us?

Do high taxes really hurt the economy as much as they believe, and will lowering them have much of an impact on stimulating it? The economic literature is clear — tax breaks to encourage economic relocation or investment decisions are inefficient and wasteful. Hundreds of studies reach this conclusion. When businesses are surveyed regarding factors important to their investment decisions, taxes often come in behind proximity to markets, suppliers, and the quality of the labor force. These other factors occupy a larger percentage of a business’s budget than do taxes, and all of them are far more critical to long-term success than are taxes. Businesses occasionally admit this. Nearly 62 percent of those interviewed in a California study on hiring tax credits indicated that they had never or rarely affected their decision to employ individuals.

Anecdotal stories and illustrations also confirm the tax fallacy. High tax states such as Minnesota have generally fared better in terms of economic growth, unemployment, median family incomes, and location of Fortune 500 companies than low tax ones such as Mississippi and Alabama. In many situations high taxes, and with that, government expenditures on education, workforce training, and infrastructure, correlate positively with income, low unemployment, and business retention. One needs to look not just a one side of the equation—taxes—but the other side too—what taxes buy—to see what value businesses get out of them in terms of educated workforces and infrastructure investments. Most debates fail to do this. 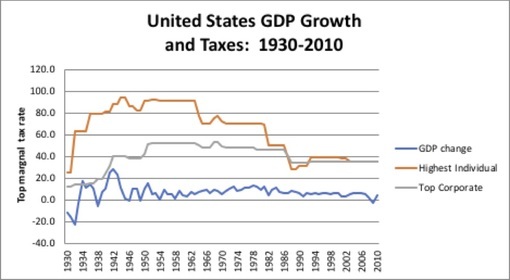 Bureau of Economic Analysis statistics demonstrate how economic growth is related to tax rates. One can compare annual economic growth as measured by the percent change in the gross domestic product (GDP) percent based on current dollars to the highest federal individual tax rate and the top corporate tax rate since 1930. If taxes are a factor affecting economic growth, one should see an inverse relationship between growth of the U.S. economy and higher tax rates. The GDP should grow more quickly when top individual and corporate tax rates are lower. If taxes are a major factor deterring economic growth, lines on a graph should go in opposite directions: As tax rates go up the GDP should go down.

No such pattern emerges between high taxes and GDP growth over 80 years. During the Depression of the 1930s corporate and individual taxes rates increased, but in 1934 through 1937 the GDP grew by 17%, 11%, and 14% annually. Top corporate tax rates climbed to over 50% through the 1960s, again with no discernable pattern associated with decreased economic growth. The same is true with top tax rates on the richest which were 91% into the 1960s. Conversely, since the 1980s after Kemp-Roth and then after 2001 with the Bush era tax cuts, there is no evidence that the economy grew more rapidly than in eras with significantly higher tax rates on the wealthy and corporations.  The same is true even of the much heralded 1960s Kennedy tax cuts.  While at one time economists thought they had an almost magical impact on the economy, more recent evidence questions that.

Looking at time periods when tax rates were at their highest, GDP often grew more robustly than when taxes were cut. Visually, the attached graph simply fails to demonstrate that tax rates negatively impact economic growth.

Pictures are worth a thousand words, but statistics are priceless. Statistically, if a tax hurts economic growth, the correction with it is -1. If they positively facilitate growth the relationship is 1, and if they have no impact the relationship is 0. The correlation between GDP and top individual taxes is 0.29, between GDP and top corporate taxes is 0.32, and among the three it is 0.14. Statistically, there is a slight positive impact on either top individual or corporate taxes or economic growth, but overall almost no connection between tax rates on the wealthy and corporations and economic growth in the United States.

But what about taxes as job killers? Again running similar statistical tests, there is little connection. Using Bureau of Labor Statistics data on unemployment rates since 1940, the correlation among top individual and corporate taxes and the annual unemployment rate is -0.02—essentially no connection at all.

The simple claim that high tax rates on the wealthy and corporations hurt economic growth and job production is false. The evidence is simply not there to support assertions that high taxes alone hurt the economy or that cutting them will have the stimulus effect asserted.  Representative Alexandria Ocasio-Cortez may be correct that increasing taxes on the wealthy will not only be more fair, but an efficient means to stimulate the economy, help the poor, and generate the resources necessary to fund a fair and equitable America.