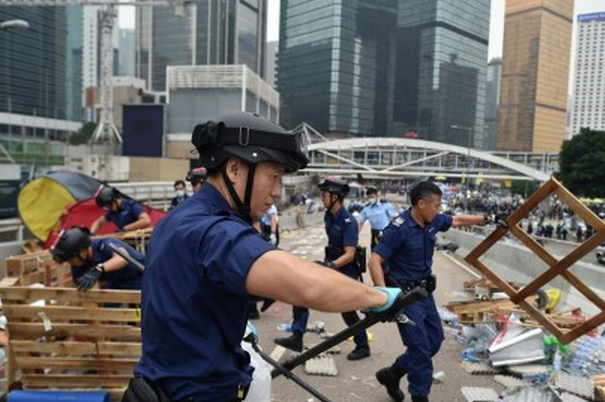 An Occupy activist who previously told a court that he would not forgive himself if he moved was fined HK$3,000 in Eastern Court today for refusing to leave a road divider during a clearance operation in Admiralty last year.

Handing down the fine on taxi driver Yeung Tak-wah, magistrate Lee Siu-ho said: “I understand that your motive stemmed from some thoughts and a strong belief you had over some matters.”

At the time of the offence, Yeung was protesting against the city’s restrictive political reform framework handed down by the National People’s Congress Standing Committee on August 31 last year.

“But at the same time, you have to consider the rights and freedoms of others,” Lee added.

Yeung, 55, who represented himself in court, pleaded not guilty earlier to one count of obstructing a police officer.

The court previously heard that on December 11 – the day which marked the end of the Admiralty Occupy sit-in – Yeung sat on a road divider on Tim Mei Avenue, ignoring police instructions and refusing to leave.

He told the court that he hoped to have a discussion with pro-Beijing politicians over the controversial reform proposal, and he would lose his chance if he left as ordered by police.

Yeung, who stressed many times in court that he was “trying to do the right thing”, said he would not have forgiven himself if he had acted on the police instructions. After refusing to leave, he asked police to arrest him that day.

The magistrate found him guilty earlier on the ground that Yeung’s invitation for an arrest indicated clearly that he knew it was illegal to stay on.

Yesterday, the court heard that a report on Yeung, which the defendant said was inaccurate and failed to record details of the cash-strapped taxi driver’s charity donations, did not suggest a community service order.

Yeung said the probation officer advised him to “look at things from a broader perspective”, but failed to explain why. He then went on to tell Yeung the suggestion was “just a ritual”, before describing Yeung as a stubborn person in the report.

The magistrate took into account Yeung’s law-abiding life and the nature of the offence, which stopped short of being serious. He ruled that a fine would be appropriate.

Outside court, Yeung, who expected an immediate custodial sentence, said the sentence was fair, but he would consider appealing against conviction.