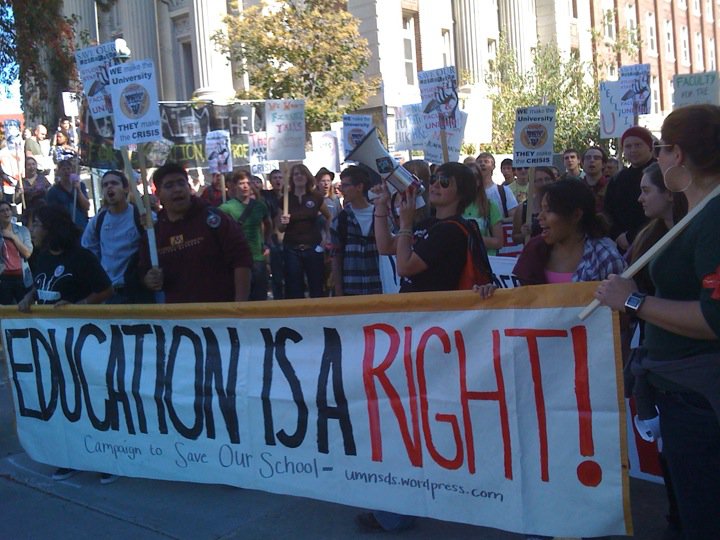 This summer, alumni and current teachers are launching the first ever national campaign against Teach for America.

Twenty-four years running, the rap on Teach for America (TFA) is a sampled, re-sampled, burned-out record: The organization’s five-week training program is too short to prepare its recruits to teach, especially in chronically under-served urban and rural districts; corps members only have to commit to teach for two years, which destabilizes schools, undermines the teaching profession, and undercuts teachers unions; and TFA, with the help of its 501(c)4 spin-off, Leadership for Educational Equity, is a leading force in the movement to close “failing” schools, expand charter schools, and tie teachers’ job security to their students’ standardized test scores. Critics burn TFA in internet-effigy across the universe of teacher listservs and labor-friendly blogs. Last July, it earned Onion fame: an op-ed entitled “My Year Volunteering As A Teacher Helped Educate A New Generation Of Underprivileged Kids,” followed by a student’s take, “Can We Please, Just Once, Have A Real Teacher?”

Despite the endless outcry, no one has ever staged a coordinated, national effort to overhaul, or put the brakes on, TFA—let alone anyone from within the TFA rank-and-file. On July 14, in a summit at the annual Free Minds/Free People education conference in Chicago, a group of alumni and corps members will be the first to do so.

The summit, billed as “Organizing Resistance Against Teach for America and its Role in Privatization,” is being organized by a committee of scholars, parents, activists, and current corps members. Its mission is to challenge the organization’s centrality in the corporate-backed, market-driven, testing-oriented movement in urban education.

“The goal is to help attendees identify the resources they have as activists and educators to advocate for real, just reform in their communities,” says co-coordinator Beth Sondel, a 2004 TFA alum who is now a PhD student in the Department of Curriculum and Instruction at the University of Wisconsin. Though the organizers don’t have pre-set goals, possible outcomes range from a push for school districts not to contract with TFA to counter-recruitment of potential corps members away from the program.

TFA’s resources are enormous. The organization’s total assets for the 2011 fiscal year topped $350 million. That includes eight-figure support from the Broad, Walton, and Gates Foundations, leading bankrollers of campaigns to privatize school districts and ramp up standardized testing. The TFA orbit is also growing. It now has more than 10,000 corps members in 48 regions, as well as more than 32,000 alumni. Districts pay thousands in fees to TFA for each corps member in addition to their salaries—at the expense of the existing teacher workforce. Chicago, for example, is closing 48 schools and laying off 850 teachers and staff while welcoming 350 corps members. After Hurricane Katrina, New Orleans cut 7,500 school staff, converted the majority of its schools to charters, and, between 2005 and 2010, saw its share of black teachers drop from 73 percent to 56 percent. Over the past five years, TFA expanded its Greater New Orleans corps from 85 teachers to 375.

For districts, charter schools and fast-tracked teachers are attractive alternatives to public schools staffed with unionized labor—especially under the well-financed push that TFA supports. As the organization grows, it cultivates leaders who align themselves with its pro-charter slant. Leadership for Educational Equity’s alumni resources, as well as its biggest names, trend toward a particular politics. The 11,000 alumni who attended TFA’s 20-year anniversary summit in 2011 got to hear from charter boosters ranging from Harlem Children’s Zone CEO Geoffrey Canada and StudentsFirst CEO Michelle Rhee to U.S. Secretary of Education Arne Duncan and Colorado State Senator Michael Johnston. TFA alums are principals at half of KIPP charter schools—which two alumni founded—and the majority of Achievement First schools. Of the corps members TFA claims remain in education after their two-year stint (a hotly contested figure), administrators and extracurricular leaders are included.

The Chicago summit builds on the gamut of student, teacher, and community resistance to TFA-aligned reform, including recent, successful pushback against TFA itself. In May, Minnesota governor Mark Dayton vetoed $1.5 million in funding for the organization, citing TFA’s already-loaded coffers. Three weeks later, the state’s Board of Teaching voted to deny TFA a group-based licensing variance, an extra hurdle for corps members to be allowed to teach. In April, prominent alumni played a key role in getting the California Commission on Teacher Credentialing to tighten the training requirements for teachers of English language learners—which will directly impact corps members.

Within TFA, resistance is an uphill battle. The optimism that singular change agents can overcome poverty—successful teaching “requires all the same approaches that transformational leadership in any setting requires” and “there is nothing elusive about it,” as TFA founder and CEO Wendy Kopp puts it—is a powerful brand that crowds out dissent. Those who question this ideology are less likely to identify as TFA alums—and, in turn, less likely to invest in speaking out against TFA. Those who do speak out face narrower access to leadership pipelines within TFA’s political empire.

“One of the misperceptions of TFA is that accomplished alumni are successful because they’re so persistent, they’re so relentless,” says Janelle Scott, a 1991 corps member who studies reform politics as a professor at Berkeley’s Graduate School of Education. “What’s talked about less in public discourse is how deep alumni networks are that are largely invisible. Many alumni don’t feel that they a have a voice.”

Organized resistance among TFA teachers is limited to localized spaces like New Orleans’ New Teachers’ Roundtable, whose coordinators are helping organize the Chicago summit. The local roundtable was formed by a group of TFA teachers who felt that the organization didn’t prepare them for students dealing with trauma or connect them with teachers fighting for racial justice before the storm. “That really made a lot of us pretty incompetent,” says Derek Roguski, a 2008 corps member and summit organizer. “Without that training, we thought the best thing was to create conversations in our community, and between our community and the people who we work with in New Orleans.” The roundtable hosts “story circles,” modeled after the Student Nonviolent Coordinating Committee of the 1960s, where white teachers and teachers of color share stories about the issues that they experience and witness.

The priority that TFA assigns to individual responsibility butts heads with this kind of teacher-community solidarity. Under the TFA model, “You’re not thinking collaboratively about what are we doing in these communities,” says Terrenda White, a 2002 corps member who interviews alumni as part of her PhD research at Columbia’s Teachers College. White recalls handing in her resignation letter the same week that she received her teaching credential. “I just felt like I had severed this sense of continuity,” she says. “Notions of community just did not fit with the way in which we were churned in and out.”

The summit is intended to be a kind of scaled-up roundtable with a political edge. The organizers emphasize that their purpose is not simply to call out TFA for inadequately training teachers—but to form a space for pushing back on the privatization movement that TFA anchors.

Within the boundaries of its five-week training model, TFA admits to imperfections in connecting teachers with their host communities. “Teach For America is still evolving in our approach to these issues,” says Heather Harding, a 1992 corps member who is now TFA’s senior vice president for community partnerships, special initiatives, research, and engagement. “TFA hasn’t always been willing to grapple with critical race issues but I have witnessed a significant shift in our actions over the last three years.” Harding points to a program on race and identity that the group piloted in last year’s Charlotte summer training that is being implemented nationwide this year.

The summit, she adds, is “an important step in having alumni ‘talk back’ to TFA leadership.” In a statement to the Prospect, TFA says that it won’t be sending any senior staff to the summit, as it feels that an “official presence could potentially inhibit…open, honest communication.” Still, Harding says, “I hope that they produce a paper or presentation that makes constructive suggestions to the organization so we can be held accountable to those dissenting voices in our community. I believe in the big tent approach and I know many of my colleagues do, too.”

TFA, like its 501(c)4 spin-off, persistently defends its political neutrality. Responding to an open letter this spring from prominent TFA alum and critic Gary Rubinstein, Kopp wrote, “Active and vocal alumni like you are proof that there’s no shortage of diverse opinion within the Teach For America community. But you’re right that we haven’t done enough to highlight ideological diversity and reach out to alumni who feel that their opinions aren’t welcome.”

Highlighting diversity, in and of itself, is small beans in a world ruled by elite networks and high finance. For TFA to put its money where its mouth is, it would have to reroute its financial and political connections, which are entrenched in a particular world of reform.

Though summit organizers say they’ll be happy if TFA engages with them, they stress that their purpose is to provide an autonomous space for elevating dissenting voices. “We really are thinking of this as a countermovement,” says co-coordinator Kerry Kretchmar, a 2006 TFA alum who now teaches education at Carroll College. “We hope, out of bringing these networks together, that we’re taking the first step.”