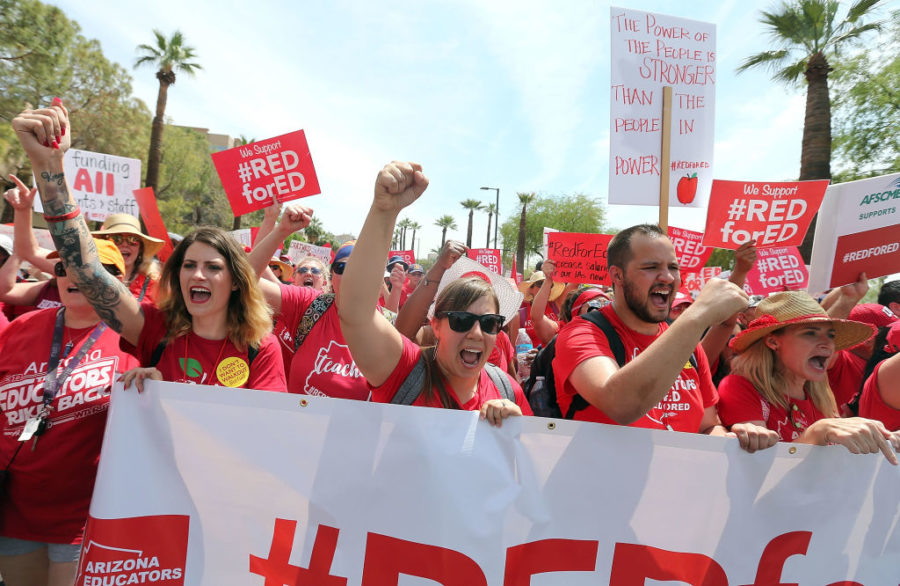 Teachers Are ‘Ready To Fight,’ Says New Tennessee Coalition Inspired By Strikes In Other States

Above Photo: Arizona teachers chant in support of the #REDforED movement as they walk through downtown Phoenix to the State Capitol on April 26, 2018. The walkout sought better wages and state funding for public schools. Its leaders are talking with teachers in Tennessee about how they can organize in a similar fashion. (Photo by Ralph Freso/Getty Images)

Weary of standardized testing and underfunded schools, and alarmed by the prospect of education vouchers and charter expansion in Tennessee, a group of teacher leaders have organized a new statewide coalition and say they are “ready to fight for the schools our students deserve.”

While a Tennessee walkout isn’t the goal at this point, it remains a possibility, according to the three primary organizers: Tikeila Rucker of Memphis, Amanda Kail of Nashville, and Lauren Sorensen of Knoxville.

“I won’t say that Tennessee is next, but I also won’t say that we’re not,” said Rucker, a former classroom teacher who is president of United Education Association of Shelby County, one of two organizations that represents Memphis teachers.

“I think we have to leave everything on the table,” added Kail, a teacher at Margaret Allen Middle School in Nashville, home to the state’s second largest district. “A lot of people are afraid to talk about it, but we can’t be afraid. I think we’re reaching a boiling point.”

In the last year, teacher movements have started small in other states like West Virginia, Arizona, Kentucky, and Oklahoma — with powerful results. But it’s uncertain whether Tennessee’s coalition will be able to grow the grassroots support needed to make demands, even though the states have similar dynamics, including weakened unions, thin labor rights, and business-friendly politics that lean Republican.

Tennessee is a deep red state where teacher strikes have been illegal since 1978 when the last one occurred in Memphis. Teachers unions were further weakened in 2011 when they lost collective bargaining rights under the administration of Republican Gov. Bill Haslam.

Meanwhile, the state rolled out education reforms driven by new academic standards and measures to hold teachers and schools accountable. Those tied teacher evaluations to student test results, a shift that still angers educators who question the validity of scores under Tennessee’s problem-plagued TNReady test.

Haslam also invested $500 million in new funding in K-12 education, including teacher raises, but Tennessee’s per-pupil funding remains one of the lowest in the region and in the bottom half of the nation.

Adding fuel to the discussion is new Republican Gov. Bill Lee’s announcement last week that he wants to create a voucher program, which would divert taxpayer money to pay for private education services, and also make it easier to start new charter schools in Tennessee. Both proposals are opposed by educator groups who would rather see more investments in traditional public schools. 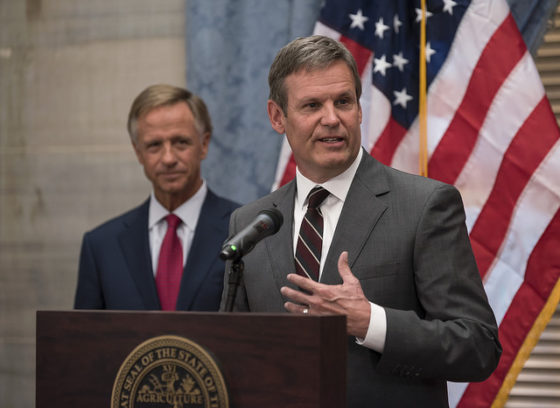 PHOTO: TN.gov
Bill Lee speaks with reporters in November 2018 after his election as Tennessee’s 50th governor, as outgoing Gov. Bill Haslam looks on.

“Given our current governor and the state legislature, things look really grim,” said Kail. “We’re also seeing a decline in people who want to be teachers enrolling in colleges of education.”

Kail and other organizers created a Facebook group and began promoting the new coalition this week by inviting educators to join and complete a questionnaire about their biggest concerns. Within a day, they had more than 200 members — and were growing by the hour. There are no plans to collect dues like a union does.

One organizer said feedback from the questionnaires will drive their next steps. “It doesn’t do us any good to have hundreds and thousands of people who are upset and angry. It’s only going to help if they’re passionate enough to do something about it,” said Sorensen, who teaches at Halls Elementary School in Knox County.

The organizers are following a blueprint used by teachers in West Virginia and Arizona who talked through their strategies during an hourlong video-conference. They convened with Tennessee leaders on Feb. 28 with the help of Labor Notes, a national media and organizing project that seeks to develop grassroots labor movements.

Chris Brooks, a Labor Notes writer who helped facilitate the meeting, said Tennessee is ripe for stepping up its advocacy beyond the tactics of rank-and-file teacher organizations like the Tennessee Education Association.

“They can be conflict-averse and try to talk people out of doing things like a strike, but a strike can be the most powerful tool there is,” said Brooks, a former labor organizer in Chattanooga who also previously worked for the Tennessee Education Association.

Brooks, who has assisted with teacher movements in West Virginia, Arizona, and Kentucky, believes Tennessee is next.

But JC Bowman, executive director of the 8,000-member Professional Educators of Tennessee, cautioned against moving toward a strike.

“If you come out militant, you’re going to bring out the militants on the other side,” Bowman said. “Teachers would be putting their jobs on the line. You play chicken with some people, you can lose.”

Tennessee has at least six professional and advocacy organizations for teachers, some of which represent educators in labor negotiations with local districts.

All three organizers of the new coalition are active in the largest and most powerful group, the Tennessee Education Association, also known as TEA, and have expressed frustration with its pace.

“Over the past few years, we haven’t gotten results by being at the table,” said Rucker.

Beth Brown, a Grundy County teacher who became president of the teachers association last year, said she welcomes the energy of the new coalition and notes that the group’s core beliefs appear to be aligned with those of the Tennessee Education Association.

They include a call for full state funding of public education; opposition to standardized testing as a means to label and punish schools, teachers, and students; a commitment to education equity; and opposition to vouchers in any form or funneling public money into charter schools.

Brown took issue, however, about the effectiveness of TEA’s work.

“We know that, if it hadn’t been for the advocacy efforts of our members during the last decade, Tennessee would already have had private school vouchers and radical charter school expansion,” she said. 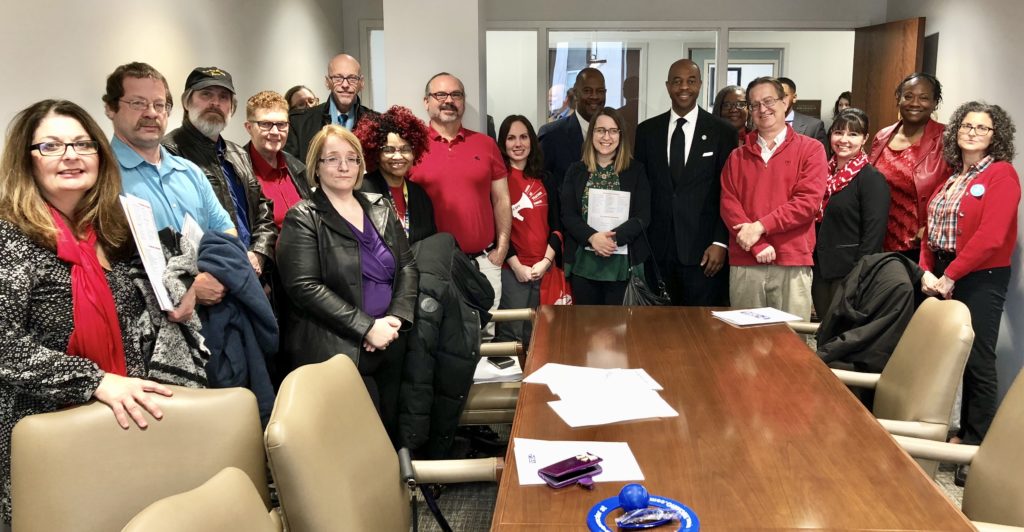 Teacher members of the Tennessee Education Association meet Tuesday with Rep. Harold Love of Nashville during an advocacy day at the State Capitol in Nashville. TEA encourages members to use a day of their spring breaks to lobby lawmakers on issues important to teachers. (Photo courtesy of TEA)

Coalition organizers in Tennessee say talk of a strike is building but emphasize that such discussions are premature. First, teachers must do some soul-searching on priorities and recruiting to gauge statewide support.

“The conversation now is about what really drives us. Is it funding or wages? Is it TNReady? Vouchers? Discipline? Or is it all of these things?” asked Kail. “We saw in Los Angeles how teachers tied together a bunch of things with a lot of success.”

The numbers also have to be there, pulling in as many of the state’s 66,000 public school teachers as possible, as well as retired teachers, parents, students, and community members.

“We should never be afraid of our own power,” said Rucker.

Sorensen adds: “We’ve been paying attention to other states and they seem to be getting results. I’d rather not strike. I’d rather stay in my classroom and teach. But it seems like our politicians don’t respond to anything else.”