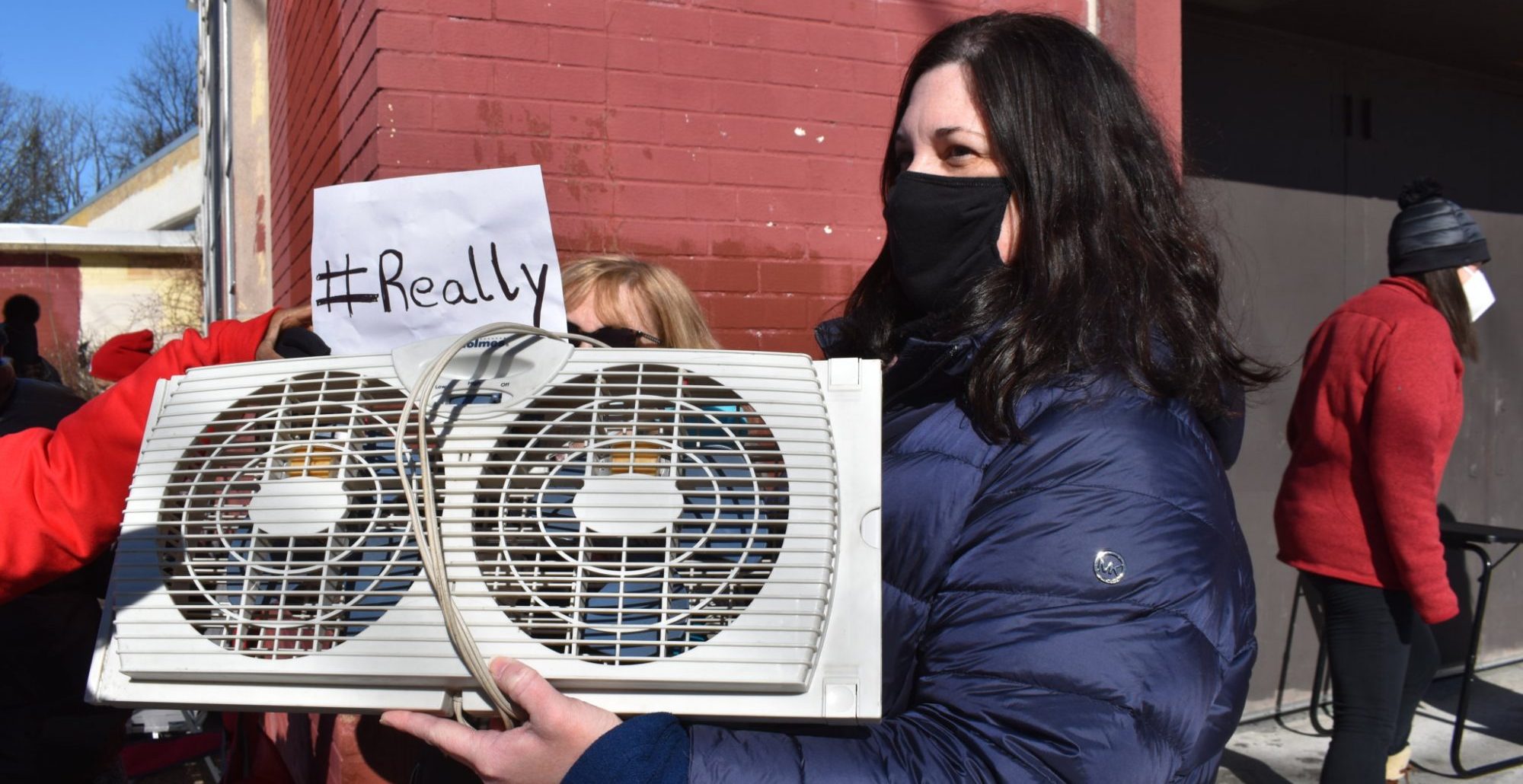 Above photo: A protesting staff member holds up a window fan Monday, Feb. 8, during a demonstration outside F.S. Edmonds Elementary. Jack Tomczuk.

Andrea McLaughlin, a second grade teacher, is afraid to return to her school, F.S. Edmonds Elementary in Northwest Philadelphia, because she doesn’t know what she will find.

She, and many other public school teachers, don’t believe in the promises the School District of Philadelphia has made in its plans to reopen this month.

“This is beyond COVID,” McLaughlin said. “This is about trust, and this is about getting us what we need and our kids deserve.”

McLaughlin and other staff were supposed to return to school buildings Monday for the first time since March. Instead, they were joined by union leaders, politicians and supporters in demonstrations outside schools across the city.

In freezing cold temperatures, they led virtual classes from tents and fold-up chairs and carried signs ridiculing the district’s decision to use window fans to improve air flow at aging schools.

City officials late Sunday night said that the 2,000 teachers who had been told to report to school buildings Monday could stay home, pending a ruling from a third-party mediator.

The decision came after discussions between Mayor Jim Kenney and Superintendent William Hite, according to Lauren Cox, a spokesperson from the mayor’s office. She said Kenney has been “directly involved” in talks between the union and the district.

Kenney, in a statement Monday, affirmed that he “fully supports” the district’s plan to bring back 9,000 pre-K to 2nd grade students on a hybrid schedule beginning Feb. 22.

Last week, the Philadelphia Federation of Teachers triggered a mediation process under a reopening agreement signed in the fall.

Jerry Jordan, the union’s president, has raised questions about the district’s ventilation reports, and the district’s intention to install window fans in 1,100 classrooms has sparked anger among his membership.

The mediator, Dr. Peter Orris, a Chicago-based environmental and occupational medical expert, was picked by the Mayor’s Office. It’s unclear when he will release his conclusions, though Jordan said he expects a “very rapid decision.”

Orris had not revealed his findings at the time Metro went to print.

Randi Weingarten, head of the American Federation of Teachers, the PFT’s national union, was in Philadelphia on Monday, stopping at several schools to encourage educators.

She said union members were putting a “line in the sand” regarding building conditions, and she compared Hite to former President Donald Trump, saying neither had plans in place to combat the pandemic.

“These fans, they’re going to make things worse, not better,” Weingarten said. “It is such a sign of disrespect to kids and to all of us.”

Teachers at the demonstration said they are not trying to get out of work and realize face-to-face classes are better for students. Some said conducting online lessons requires even more preparation on their part.

“We all want to see the kids have the best education possible, but we want it to be safe,” said Paul Schiller, a teacher in the Bright Futures preschool program at F.S. Edmonds.

Municipal leaders announced Monday afternoon that the city will be partnering with the Children’s Hospital of Philadelphia to inoculate employees at public, private, charter and parochial schools and childcare centers.

Teachers should begin receiving coronavirus vaccinations by the end of the month, officials said. The injections will be distributed at a number of locations, including pop-up clinics at schools, according to the city.

“We are thankful for this initiative that prioritizes our employees, and look forward to supporting the implementation of this plan as we continue with our plan to return our staff and students back to school,” Hite said in a statement.

School personnel are included in Phase 1B of the city’s inoculation campaign; however, they were placed below residents 75 and older, people with certain medical conditions and some essential workers, such as firefighters and police officers.

Ventilation and vaccination have been the main concerns of teachers and PFT leaders.

Jordan and AFT Pennsylvania President Arthur Steinberg told Metro on Monday that it didn’t make sense to bring teachers back when the country was “so close” to a wider vaccine roll-out and a potential decline in virus spread.

McLaughlin would not hesitate to sign up for a shot.

“I would feel 100% better if I walked in that building with a vaccination,” she said.