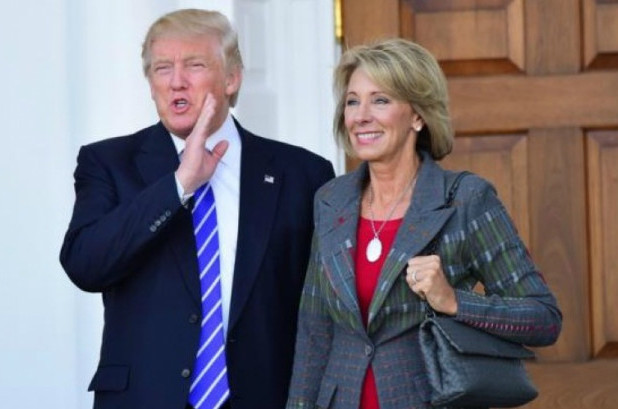 If you see a sea of teachers dressed in black this week, there’s a reason why.

Teachers and supporters of public education are donning all-black outfits this week to protest the confirmation of U.S. Secretary of Education nominee Betsy DeVos, sending a message of resistance against Trump’s controversial pick for the country’s top education job.

Badass Teachers Association organized the blackout protest via social media, calling on teachers, educators, parents and supporters of public education to wear all black to encourage lawmakers to vote against her confirmation.

“We want our senators to dump DeVos,” the group wrote on Twitter.

On Monday, teachers around the country joined in solidarity to say “no,” to DeVos, whose nomination has caused a commotion since Trump made the announcement in November.

Social media feeds lit up with teachers from all corners of the U.S. snapping photos of themselves joining in the resistance via their all-black wardrobes.

“Every black piece of clothing in my closet says don’t vote for private school lady to run public schools,” wrote one teacher.

With nearly 60,000 BATs across the country, their voices have been loud in their opposition to DeVos.

The U.S. Senate will vote on DeVos’ confirmation this week, and while senators are expected to give her the green light for the job, the vote is also anticipated to be extremely close.

All GOP senators — except for two — are likely to vote for DeVos, which would result in a 50-50 split  requiring Vice President Mike Pence to break the tie.

Opponents of DeVos have flooded the phone lines of senators for weeks, pleading with their lawmakers to vote against her confirmation. The sheer number of calls has been unprecedented, leaving many senators scrambling to take all of the calls to hear their constituents’ concerns.

Like many other teacher groups, the BATs say DeVos is wrong for public education since she has never been a teacher, nor has she held any sort of education-related public office.

DeVos is also a strong supporter of the school choice program, which teachers say funnels important funding away from public schools.

DeVos’ nomination threatens to figuratively dismantle teachers unions, whose positions are often at odds with DeVos’.

Those that don’t vote against her confirmation can expect pushback from teachers, who say they won’t forget the vote when it comes time for reelection in 2018.

“I support @BetsyDeVos’ nomination, because every child deserves a good #education regardless of their zip code or how much money they have,” Rubio wrote on Twitter last month.

National Education Association president Lily Eskelsen García said America would see what senators were made of during the floor vote this week.

“The moment of truth is now,” García said. “Will senators stand with our students and the public education system that educates nine out of every 10 students or will they ignore the growing chorus of bipartisan voices urging them to vote no on the controversial pick?”

“Senators: we are watching,” she continued. “America is watching to see if you do what is right—reject the DeVos nomination—on behalf of students and public education.”

The vote on DeVos will be held this week.