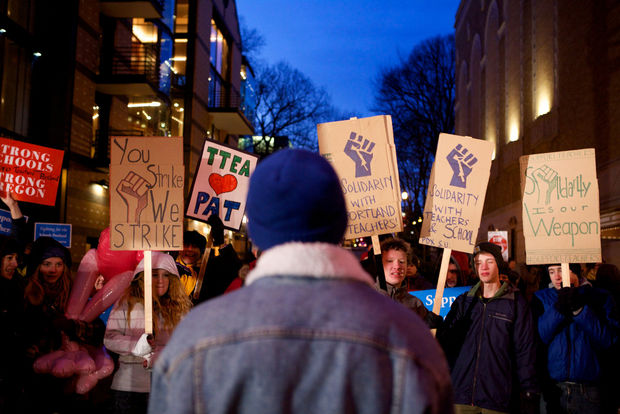 Teachers In Oregon Vote To Strike For Better Learning Conditions

Above: Students and supporters gather outside of the Arlene Schnitzer Concert Hall, as teachers prepare for the strike vote. (Emily Jan/The Oregonian).

Among those demands, the teachers are calling for Portland Public Schools to hire more teachers in order to allow smaller class sizes. The teachers are also calling for a curriculum that “does not force teachers to teach to the test” and an increase in teacher pay that “provides fair compensation after years of sacrifice,” according to the Portland Association of Teachers.

“No teacher ever wants to go on strike, we want to be in classrooms with our students,” explained PAT president Gwen Sullivan. “But Portland teachers are united and resolved to stand up for our students’ learning conditions. It’s time to move this to a conclusion so that we can have a contract that is fair for teachers and good for students.”

Emphasizing the fact that the strike is over more than just teacher pay, Mark Wilson, a teacher at Rosa Parks Elementary in North Portland stated, “I wouldn’t strike if this were over a percentage point over salary. It’s about class sizes.”

Ahead of Wednesday’s vote, parents, community members and students rallied outside the venue in support of the teachers.

Students at several Portland high schools also planned their own rallies in support of the teachers’ demands, as the Portland Tribune reports. Portland Student Union members organized walkouts across the district at Jefferson, Lincoln, Cleveland, and Grant high schools on Wednesday.

“We want teachers to know we have their back,” said Emily Crum, a Portland resident and a teacher in Reynolds School District. “It’s so important for teachers to know how the community and parents support them.”

While the district has said it would attempt to keep schools open with the use of substitute teachers in the case of a strike, parents have shown resistance to this notion, Reutersreports.

“I don’t think we would send them to school with substitutes. We support the teachers,” Ali King, the mother of two daughters in the sixth and ninth grades told Reuters. “Even with qualified subs, it will be a disruptive atmosphere.”

Teachers and the district currently have a mediation session scheduled for Sunday, February 9th. If that session does not resolve the teacher’s demands, the strike will likely commence.

“This vote shows that teachers are serious about addressing the growing crisis in our schools,” said PAT bargaining chair Bill Wilson, a teacher at Grant High School. “We hope that Superintendent Smith and School Board leaders understand this and will come to the bargaining table as soon as possible prepared to make meaningful progress toward addressing the priorities of teachers, parents and students.”