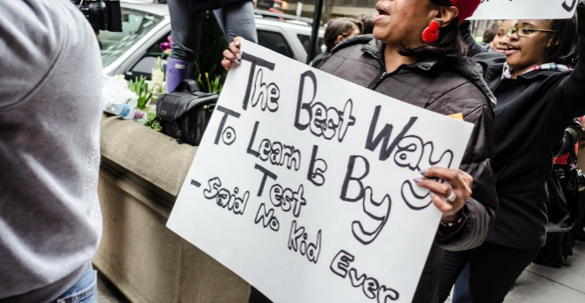 A protest against high-stakes testing in Chicago. (Photo: sarah-ji/cc/flickr)

A group of teachers is holding a rally Thursday evening in Seattle to denounce education reform measures they say have been an attack on public education and let corporate interests and high-stakes testing trump real student learning.

The target of their protest: The Bill and Melinda Gates Foundation, whom the teachers say has used its monetary power to push corporate reforms and is symbolic of measures—like Common Core Standards and over-testing—that don’t let educators be the decision makers of education policies.

The action, organized by the BadAss Teachers (BATs) of Washington, whose vision is to “educate teachers, parents, students and communities on the long term consequences of current education reforms,” begins with a rally and will lead to a march to the Gates Foundation headquarters.

Julianna Dauble, full-time teacher in Renton, Washington and organizer of the action, told Common Dreams that the Gates Foundation “bought us Common Core,” in addition to promoting other things like charter schools, increased testing and Race to the Top, without a democratic process that involves consulting teachers.

It’s been a “test-teaching regime” Dauble said, where teachers “have been strangled.”

The increased testing has just “purchased a lot more for work teacher,” but has failed to meet the whole needs of the child, Dauble continued, adding that “teachers don’t value the test results.”

Gates has been pushing so-called “magical, silver bullets” to solve problems in education that leave students “unable to be critical thinkers, problem solvers, and not at all certain where they fit in the world. ”

Gates’ approach ignores real barriers to learning like poverty and class size, she said. At the same time that there’s money to purchase more and more evaluators, schools have been cutting social supports like counseling that kids need, she said.

Kids learn “based on human relations,” she said. But now teachers are in a situation where they feel they “don’t have space to meet those relationships.”

Learning requires “low class size, time to collaborate, having art,” she continued, not just being alone and taking tests.

A statement released by the rally organizers puts the issue in a bigger context:

In 2014 political power resides in monetary wealth and public policy is being determined by the mega-rich not the expert practicioner-in many professions. No one is asking teachers what schools need. Teachers are told that they don’t have high enough expectations for kids. This is ludicrous. Our governing system is becoming undemocratic but worse it IS harming children who need a holistic classroom experience beyond test scores. The Gates Foundation must accept that teachers are more than software; that learning is individualized; and that education is a public endeavor. Excellent public schools are the cornerstone of a free society: big money is buying the education agenda. People must stand up to this oligarchical shift and reclaim public schools with the whole child at the center. Business reformers need to spread their expertise in places where they know what they are talking about. Teachers are experts when it comes to student learning. Ask us what kids need to thrive and learn. We are happy to tell you.”

“This is the first direct action of many to come,” Dauble said. Though Thursday’s action is education-focused, she said that they’re building a broad-based coalition, including environmental, lgbt and other community groups that will continue the momentum.

“We’re starting a revolution,” she said.

Follow the Education the Gates Foundation Twitter feed to see more of the event as it unfolds: