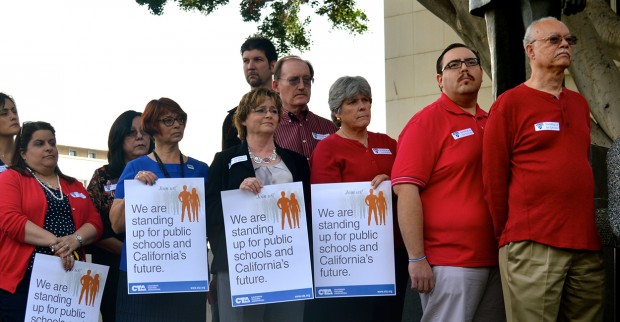 In a ruling with broad implications for public education across the United States, a California court on Tuesday struck down key workplace protections for the state’s public school teachers by siding with student plaintiffs—backed by powerful political forces— who claimed such policies negatively impacted the quality of their learning.

“Like the lawsuit itself, today’s ruling is deeply flawed,” said Dean Vogel, president of the California Teacher’s Association, in a statement about the decision. “This lawsuit has nothing to do with what’s best for kids, but was manufactured by a Silicon Valley millionaire and a corporate PR firm to undermine the teaching profession and push their agenda on our schools.”

“This suit is not pro-student. It is fundamentally anti-public education, scapegoating teachers for problems originating in underfunding, poverty, and economic inequality.” —Joshua Pechthalt, CFT president

In a 16-page decision, Treu overturned key workplace safeguards and due process rights for teachers, including seniority, tenure, and other job protections. He backed the plaintiff’s argument that laws protecting tenure and seniority are discriminatory because they keep, in his words, “grossly ineffective teachers” in classrooms that disproportionately serve “low-income and minority students.”

Yet, Joshua Pechthalt, president of the California Federation of Teachers, declared in a statement, “Rather than provide resources or working to create positive environments for students and teachers, this suit asserts that taking away rights from teachers will somehow help students. This suit is not pro-student. It is fundamentally anti-public education, scapegoating teachers for problems originating in underfunding, poverty, and economic inequality.”

Kevine Boggess of San Francisco-based Coleman Advocates for Children and Youth told Common Dreams that the ruling is “misleading” about the problems that students in his community face. “What we see in San Francisco is issues of civil rights and racial disparities, as well as arrests at school sites, come down to the fact that key constituents are not allowed in decision-making. The real issue is how do we improve the education system, not how do we take rights away.”

According to education policy analyst Diane Ravitch, Treu’s claim that making it easier to fire teachers will improve education “lacks any evidentiary basis” and is the “latest example of the blame-shifting strategy of the privatization movement.”

“[This] is the latest example of the blame-shifting strategy of the privatization movement. —Diane Ravitch

The lawsuit, Vergara v. State of California, was brought by nine public school students who were heavily backed by the organization Students Matter, which was founded by Silicon Valley millionaire David Welch.

Welch, whose organization is associated with prominent corporate education reformers, bankrolled a team of lawyers to represent the plaintiffs and worked with a corporate PR firm to garner public support for the challenge. According to the New York Times, the organization is considering similar lawsuits in cities across the United States, in a bid to expand from the three states, as well as the District of Columbia, that have already overturned tenure protections.

U.S. Education Secretary Arne Duncan immediately hailed the California decision, calling it a model for a “a new framework for the teaching profession.”

Ravitch charges, “If they were truly interested in supporting the needs of the children, the backers of this case would be advocating for smaller classes, for arts programs, for well-equipped and up-to-date schools, for after-school programs, for health clinics, for librarians and counselors, and for inducements to attract and retain a stable corps of experienced teachers in the schools attended by Beatriz Vergara and her co-plaintiffs.”

California teachers unions have vowed to appeal the ruling, and Treu moved to keep existing laws in place while the appeals process is ongoing.

“This lop-sided decision is outrageous,” said Gadlin, “and must become the national linchpin for teachers, parents, and defenders of our students to press forward with our fight for education justice in this country.”