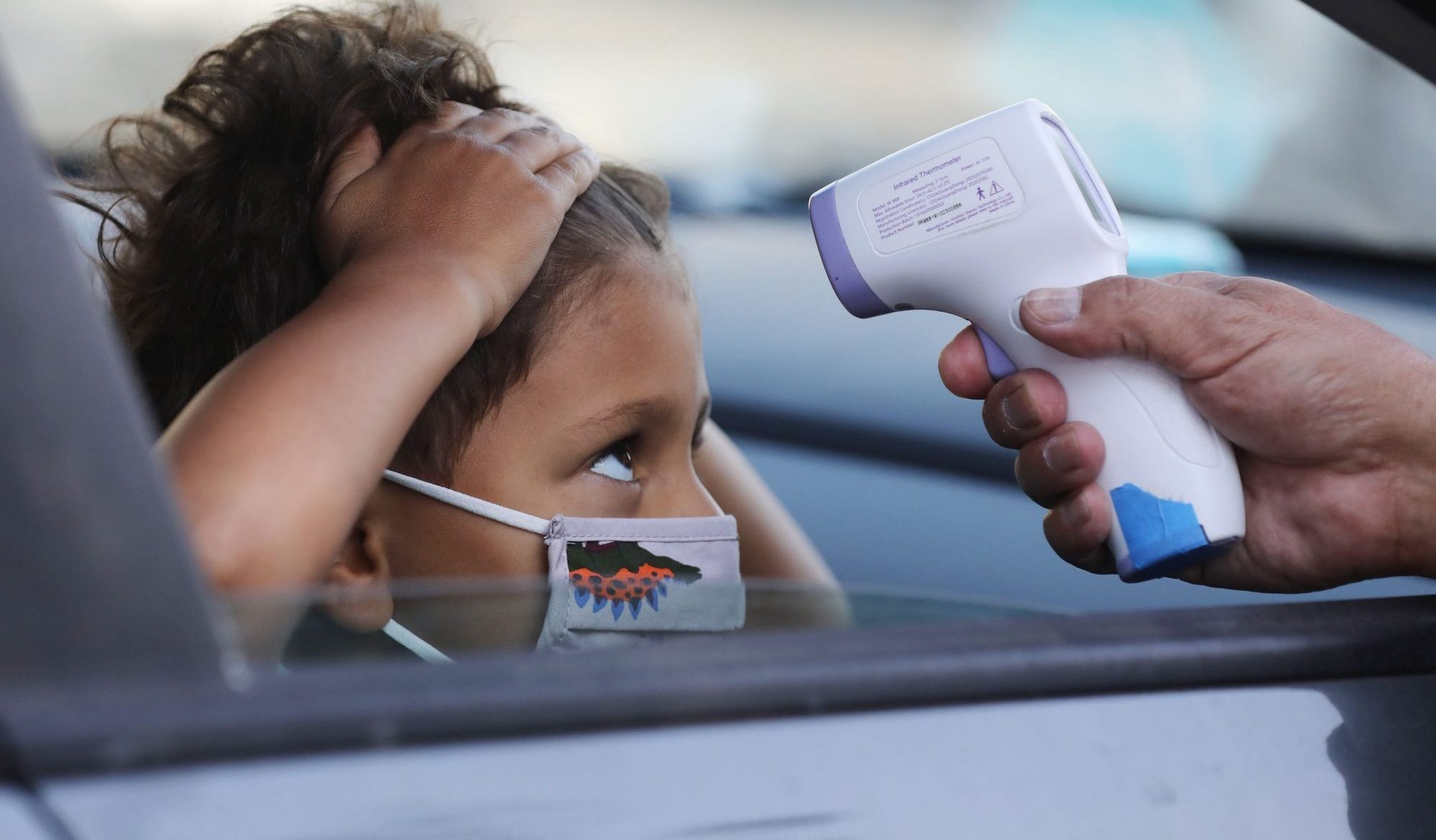 School officials and teachers have very different views on whether it’s safe for students hurt by missing in-person classes to safely return to the classroom.

When Baltimore City Schools announced last week that 25 schools will reopen next month to increase in-person instruction for high need students, officials promised it could be done safely and with transparency.

The district has received little guidance from state or federal authorities on how to reopen safely, and teachers, who will be required to return to the classroom, say they were blindsided by the announcement. They are now calling attention to problems with the recent reopening of Student Learning Centers (SLC) as an example of their concerns.

On Sept. 28, a limited number of students began attending 15 SLCs, sites open to students who are experiencing homelessness, or those who otherwise will benefit from being in a physical classroom environment to connect with their teachers, who are currently working remotely.

Everyone who enters an SLC has their temperature checked, and students are separated into “learning pods,” which limits their interaction with other groups of students. Mask use is mandatory, and adults also wear face shields to minimize risk of COVID-19 transmission.

Multiple teachers working with students at the SLC at John Ruhrah Elementary/Middle School, which Baltimore City Schools CEO Sonja Santelises visited on Thursday, told The Real News that adults at the site are not strictly enforcing mask use for students. The school is in the 21224 ZIP code, which leads Baltimore in the number of confirmed COVID-19 cases, and has the third highest total in the state. But officials say there have been zero confirmed cases at the site since it opened, which they say suggests that current safety protocols are working.

To mitigate risk, every room has air purifiers and cleaning supplies, desks are spread out six feet apart, and are surrounded by plexiglass shields, so even if students don’t wear masks 100% of the time, the risk of transmission is reduced.

But teachers are not reassured. “Teachers are concerned that if mask use isn’t enforced in such small groups, how will it be when there are full classes,” a teacher at John Ruhrah who asked to remain anonymous said. “You can have all the cleaning supplies in the world, but it comes down to it being an airborne virus. Personally I would want the student who refused to wear a mask out of my classroom. It would become a me or them situation.”

The teachers also say the current safety protocol didn’t require school leaders and the district to notify the entire staff after two people exhibited symptoms, forcing the closure of a kindergarten learning pod on Oct. 5 and the first grade learning center last week. The district confirmed that a kindergarten student who came to school with a fever tested negative for COVID-19, and their pod has returned to the SLC. A first grade pod was released from several days in quarantine Friday after an adult exhibiting possible symptoms who was in close contact with them tested negative.

Teachers want city schools leadership to acknowledge the issues that have arisen at the SLCs that are open, saying current practices do not bode well for broader school reopenings.

“Greater transparency would be for leadership to acknowledge that and include that information when they talk to the public,” a teacher said.

Teachers want school communities and the broader public to be made aware of potential outbreaks as they happen, so they can fully evaluate the risk of returning. “The lack of transparency, and the way it was handled, does not give me a lot of faith in the district,” another teacher said.

Baltimore Teachers Union President Diamonté Brown, who defeated a longtime incumbent president in 2019, and has vowed to fight “a culture of fear and retaliation” at City Schools, said teachers around the city have reported unsafe working conditions like the ones at the John Ruhrah SLC to the union.

Patterson High School, which is among the 25 schools to be reopened in November, is “One of our most poorly ventilated schools,” Brown says, making it a potentially unsafe learning environment. Patterson often closes during extreme weather conditions. Brown also said staff there have only received half the masks the district has promised.

She’s urging parents to choose to keep their children at home and opt out of “the unsafe conditions we’re telling you about,” Brown said. “We sit endless hours, helping your children, and the community, every day, all day. We give up everything. And now you’re asking us to risk our lives? That’s too much.”

The COVID-19 outbreak has taken over 220,000 lives in the US, and school districts across the country have struggled to balance safety with the educational needs of students who are falling behind their peers in a virtual learning environment. Baltimore schools are majority Black, and the virus has disproportionately impacted African American and Latinx communities. And while transmission rates are relatively low among school age students, there’s growing evidence that those numbers are rising as schools reopen, and students, who are less likely to fall ill due to COVID-19, can asymptomatically spread the disease to their families and school staff members. No agency is tracking COVID-19 in schools across the country and Maryland does not publically report cases or suspected cases. 79 of the 121 students who died of COVID-19 between February and July were Black or Latinx, and most had preexisting conditions, according to the CDC. 20% of Baltimore public school students have asthma, which increases the risk of contracting COVID-19.

While some larger districts, like New York, are moving towards reopening, some of the nation’s biggest charter school chains will remain virtual for the rest of the year to protect students and avoid disruptions associated with having to close down in the event of a possible outbreak, Chalkbeat reported. “The best way for us to protect teaching and learning was to stay remote and have a level of predictability,” said Eva Moskowitz, CEO of Success Charter.

COVID-19 scares are especially disruptive to the families of SLC students, a teacher explained: “My students in the SLC did not all show up to virtual classes on the two days the SLC was closed.”

On Oct. 14, Baltimore City Schools released a plan announcing 25 schools would open in November, with assurances measures would be in place to minimize risk. The plan is optional for families, but teachers will be required to return to the classroom. The Baltimore Teachers Union blasted the move to reopen, arguing safety protocols are either not in place, or are being violated.

“What we know is the buildings are not safe for students, for our staff, for anyone to be in at this time,” said union president Brown at an Oct. 15 press conference.

On a press call on Oct. 14, Santelises said the district will publicly announce if school sites were forced to close due to symptomatic individuals or positive test results. But closing one pod doesn’t count as a shutdown of an entire site.

“It’s part of our commitment to remain transparent,” Santelises said, adding that individuals’ names would not be released due to legal reasons but the presence of those with symptoms would be disclosed.

This summer, the district notified the public if the meal centers the city has continued to operate were forced to close due to potential COVID-19 infections, which happened at least seven times. Teachers want a similar level of transparency at SLCs and schools that are reopening, or at least for school staff on site to be informed.

School officials explain that they informed those who needed to know about those who were symptomatic.

“Our position is that we notify the families of students and employees in the pod, as well as those in ‘close contact’,” Andre Riley, director of communications for Baltimore City Schools, told the Real News “Others that have not been in close contact do not receive that notification. The goal of our classroom pods is to create the appropriate separation between pods to help keep everyone safe.”

Several teachers who spoke to The Real News under the condition of anonymity said they want greater transparency because how this had been dealt with at the SLC is not enough.

“I am a little surprised that the way that it was handled by the principal,” said one teacher. “You know, kept it very quiet, nobody else was ever informed. She did say that if it had been positive, then everybody would know.”

No public notice was provided to the public in either instance where SLC classes were closed down due to a potential case. Multiple teachers in other grades at the school said they did not receive any official notice of the possible outbreak.

“If you are asking if we send out a news release every time? No. And I don’t think that’s what [Santelisis meant either],” Riley said.

While the district says it has committed to transparency, it has not said that it will share district-wide information on suspected or positive test results in its facilities.

Joe Kane, chair of the Parent Community Advisory Committee (PCAB) has also been demanding more transparency from the district.

“The reality is, we’re still in the middle of a global pandemic with cases on the rise and no vaccine. As long as we’re bringing students, staff, and teachers into buildings we’re going to see people get sick,” Kane said. “If there has been an outbreak, this reinforces the need for a clear plan from City Schools if we’re going to support a plan to return folk to buildings and elevates the call for transparency in reporting so we can protect our school community.”

Brown says she’s heard from a number of teachers that they feel their schools have the necessary resources to return safely. But she remains concerned about teachers who don’t feel that it’s safe to return.

“The union is prepared to take action to continue to fight for the lives of our students and staff members,” she said.