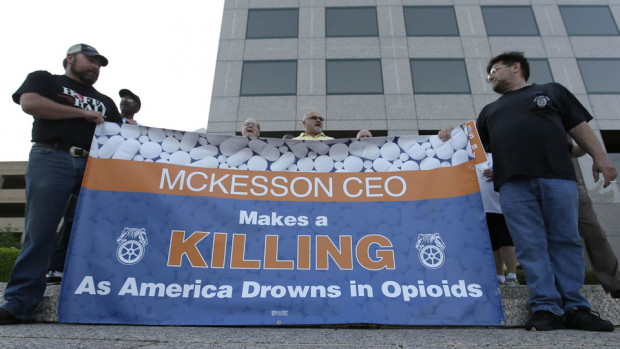 Above Photo: Teamsters hold a sign as they protest outside the McKesson Corp. shareholders meeting in Irving, Texas, July 26. | L.M. Otero / AP

WASHINGTON (PAI) — In what is a big win for shareholder activism, and in particular for Teamsters Secretary-Treasurer Ken Hall, stockholders in the nation’s largest opioid distributor, McKesson, voted down the firm’s compensation policies and ordered the board to split the positions of chairman and CEO. The twin moves punished current boss John Hammergren for his failure to halt the company’s role in the opioid scourge.

“For the first time ever, shareholders voted to hold a company accountable for its role in the opioid epidemic,” said Hall, a West Virginian whose state has been hit notably hard by the plague.

“The country’s largest drug distributor cannot get away with ballooning executive pay and failures in” its president’s “oversight as Americans die every day from opioid addiction.”

Hall also said the vote “should serve as a warning” to the nation’s other big drug distributors that their shareholders, too, want to hold corporate conduct accountable.

And even after Hammergren took over with promises of oversight, a corporate whitewash ensued, state investigators later found.

Though the Teamsters—and West Virginia officials—have led the charge against the drug firms’ overdosing customers on opioids, other unions and other states are joining in, Teamster magazine reported. Besides West Virginia, state Treasurers in Illinois, Pennsylvania and California sent letters to the drug company czars “reinforcing the union’s call for them to address the business practices that have led to the opioid crisis,” the magazine added.