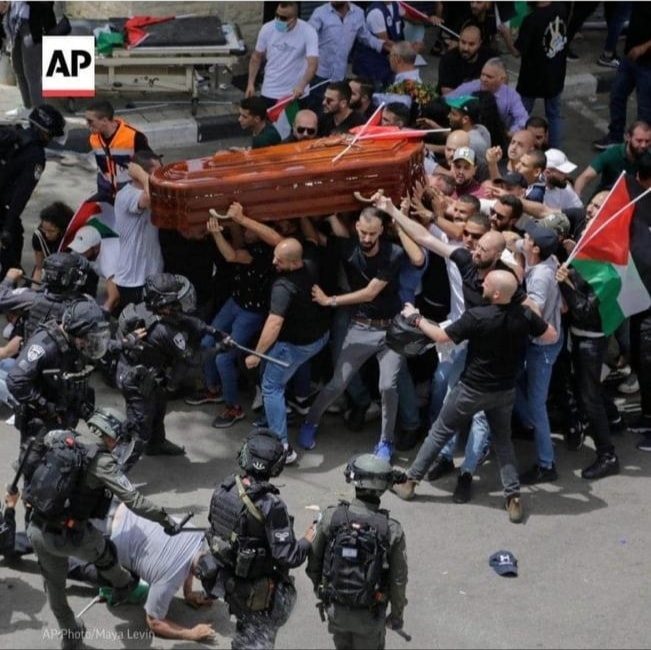 Tears And Hope From The Last Few Days

A world renowned journalist Shireen AbuAqleh was intentionally murdered by an Israeli sniper in Jenin. Millions of tears were shed for her including ours at the Palestne Institute for Biodiversity and Sustainability (palestinenature.org). We planted ten trees in her honor. The constellation of events and circumstances and her background actually were so amazing that it provided a huge dose of sadness but also a big ray of hope for us.

Jenin, where she was murdered, is a center of heroic resistance to occupation (resistance not suported by any government, international or even Palestinian). She was a journalist and wearing protective blue journalist vest and helmet. Thus she mobilized the media. She was beloved by every Palestinian home for her coverage of their daily miseries inflected by foreign occupiers for decades. She was a US Citizen thus exposed by her death the hypocrisy of the Zionist run state department that like with Rachel Corrie and other US citizens killed by Israel (a “special country immune from accountability because of a strong lobby in Washington DC). Her body underwent autopsy in Nablus att a Palestinian Medical School then taken to Ramallah and then to Jerusalem. That she is a Jerusalemite with both her Parents burried there was fortuitous bliss. She was also Christian and all Christian churches in Jerusalem rang their bells. Muslims prayed for her on their holy day in Friday just before she was burried. Millions watched and thousands participated in her burial in Jerusalem on a Friday. Mourners were Christians, Muslims, and conscientious Jews and adorned with Palestinian flags (forbidden by the Israeli occupation forces).

Occupation forces then attacked the funeral including pallbearers of Shireen after they murdered her. Here are the shocking video from different angles

Initial investigations and human rights statements on the murder of Shireen:

How the media failed in their duty to honor one of their own.

Meanwhile this same week, the Israeli regime with US government support approved removal of over 1200 people from the homes in South Hebron hills and simultaneously announced thousands of new housing units in illegal colonial settlements in the illegally occupied areas (both violations of international law). The announcement of 4427 new units was done after lengthy negotiations with the US who also was given greenlight from AIPAC to state they oppose them (even though they actually approved and funded them). The EU also produced empty words of opposition while continuing to fund the occupiers/colonizers. Here is what Jewish Voice for Peace (braver tahn all these arab and western governments) said on one incident: “Taking advantage of Palestinians’ grief [over the murder of Shireen], American Jewish settlers took over a Palestinian home in Hebron, known to Palestinians as Al Khalil before its Judaization. This theft of Palestinian homes by foreigners is a feature of Zionism, not a bug. Settlers — and of course their Palestinian victims — are clear on this. ‘We are continuing the Zionist endeavor of redeeming the Land, said Shlomo Levinger, a representative for the settler families said. And by “redeeming the land,” they mean Judaizing it, erasing Palestinians’ history and connection to it, and ethnically cleansing the Palestinians who live on it. To prevent future settler home theft, we must oppose Zionism, which has always required the forced displacement of Palestinians — as both early Zionists and today’s settlers have made explicit.

“Shireen’s voice is amplified by her murder just like Nizar Banat’s murder and just like >110,000 civilians murdered here in Palestine since Zionists arrived from Europe. We must amplify victims’ voices especially in cases like this where the constellation of events are what they are. Shireen was our voice to the world and now we must be her voice. A Jerusalem main street was taken over by its rightful owners – Palestinians with Palestinian flags and sounds of Christian and Muslim prayers. Shireen plby her sacrifice list the road for resistance and resilience. Her coffin, carried by Muslims and Christians, reminded us of what beauty and unity was like in Jerusalem before this horrific gruesome occupation. It was a sign of hope and it is a beacon of courage despite the overtime hasbara/propaganda that spends billions to keep western audiences in the dark. We must redouble our efforts to end this nightmare and liberate Palestine. The harder we work the quicker this will happen and this in turn saves lives. 23-year old Palestinian Walid Al-Sharif died of wounds sustained two weeks ago in Al-Aqsa mosque by occupation forces who attacked Muslim worshippers. We all must say enough is enough of this. EVERYONE is called upon to act in their capacity to end this nightmare (exposing Western Hypocrisy is just one of many tools)

A great speech by Charlie Chaplain during the heat of the horrible 1940s when Hitler whipped-up hatred in the name of safety for the German people as the Zionist regime does today. Still valid today if people would listen. How much better we would be if Zionists stop regurgitating hate and oppression that was inflicted on hundreds of millions throughout the ages. Listen to these very powerful words