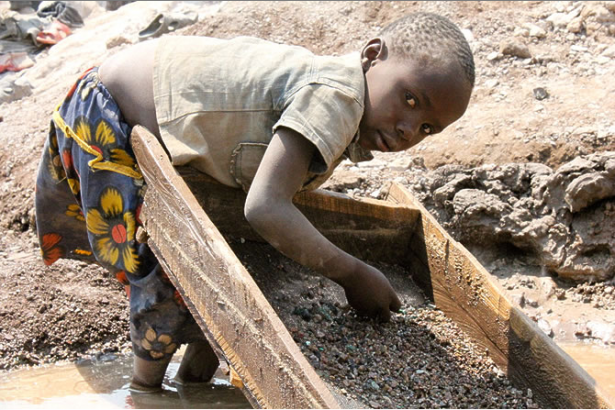 Above Photo: Children in Congo are mining for cobalt. From Beacontranscript.com.

In this episode of MintPress News’ ‘Behind the Headline,’ host and MintPress News Editor-in-Chief Mnar Muhawesh delves deep into the heart of Africa and finds that history is repeating itself in Congo.

MINNEAPOLIS — A recent Amnesty International report sounded the alarm on a “blood mineral” mined by Congolese children as young as seven and used in rechargeable lithium-ion batteries found in laptops, smartphones and even electric cars.

The mineral is cobalt, and more than half of the world’s supply comes from the Democratic Republic of Congo, including at least 20 percent which is mined by so-called “artisanal miners” in the southern part of the country. The report, titled “This Is What We Die For,” explains the conditions these miners work in:

“These artisanal miners, referred to as ‘creuseurs’ in the DRC, mine by hand using the most basic tools to dig out rocks from tunnels deep underground. Artisanal miners include children as young as seven who scavenge for rocks containing cobalt in the discarded by-products of industrial mines, and who wash and sort the ore before it is sold.”

Most of the cobalt is resold to corporations by Congo Dongfang Mining International, a wholly-owned subsidiary of China’s Huayou Cobalt Company Ltd. From there, Amnesty was able to trace the cobalt to products linked to “some of the world’s largest and best known consumer electronics companies.”[“including Apple Inc., Dell, HP Inc. (formerly Hewlett-Packard Company), Huawei, Lenovo (Motorola), LG, Microsoft Corporation, Samsung, Sony and Vodafone, as well as vehicle manufacturers like Daimler AG, Volkswagen and Chinese firm BYD.”]

Overall, there are about 110,000 to 150,000 creuseurs in Congo, including thousands of children. Exact figures are hard to come by, but UNICEF suggests that there are about 40,000 children working as miners in the country, most of them tasked with producing cobalt for just $1 or $2 a day.

Amnesty interviewed 17 children who worked in five different mines. They described being beaten, or seeing other children being beaten, by security guards. They also said those guards, who are hired by the mining companies, demanded money from them. And, without recourse against exploitative practices, they’re frequently taken advantage of by traders.

Congo, one of the poorest countries in the world, has suffered for more than a century with colonialism and exploitation driven by consumer and industry demands on other continents.

Even before Europe scrambled for control in Africa, one royal had already set his sights on the difficult-to-reach area of Congo. In 1876, King Leopold II of Belgium organized a conference, where participants discussed ways to stop the West African slave trade, get medical aid to Africa, and coordinate map-making efforts.

But the conference and the supposedly “benevolent” committee he agreed to head were nothing more than smokescreens for the king’s ambitions of building a railway that could carry goods out of the heart of Africa.

With the king — not the Belgian government — as owner and ruler, people were forced to extract country’s immense wealth, including rubber, which was exported to fuel the industrial boom of 19th- and early 20th-century Europe and America.

Under the guise of “bringing civilization to the Africans,” Marty Jezer, writing for the Brattleboro Reformer, explained the brutal lengths Leopold took:

“This army forcibly conscripted African youth to fill its ranks. It then went from village to village taking the women hostage and forcing the men to go deep into the jungle to tap the indigenous rubber trees. Those who resisted were mowed down by machine-gun fire. Many were beheaded or had their hands cut off.”

With women held hostage and men working in forced labor to maximize the rubber harvest, no one was tending to crops. Starvation took hold, and disease crept in.

International outrage finally erupted in 1908, at which point the Belgian government took control from Leopold. But, as Jezer noted:

“Belgium extracted rubber, ivory, diamonds, and uranium from the Congo and gave back nothing: no schools, no hospitals, no infrastructure, except that which facilitated the export of resources. The uranium used to make the atom bombs dropped on Hiroshima and Nagasaki came from mines in the Congo.”

Congo threw off the shackles of colonialism in 1960. The next several years saw a quick succession of leaders, and by 1971, a corrupt one-party government under Joseph Mobutu took over, renaming the country Zaire. Mobutu, a staunch anti-communist, won the support of several U.S. administrations.

Since Mobutu was forced to flee in 1997, a civil war has raged and the country has been devastated by an AIDS epidemic.

And this is where Congo finds itself today: Despite some reforms and democratic elections, it’s in relatively the same place it was more than 100 years ago under a corrupt, rubber-hungry king whose brutality knew no limits. Both now and then, the rush was for rubber, cobalt, diamonds, copper — basically, whatever Congo has that the world wants, no matter the human cost.

Chinese, American and European companies are exploiting child and adult laborers to feed the tech cravings of the people around the world who find themselves in a position to indulge their hunger for gadgets. These Congolese child laborers will probably never own a smartphone with a rechargeable battery, but without their toil for meager wages in dangerous conditions, it’s hard to say whether you or I could.

Watch the full episode of Behind The Headline: