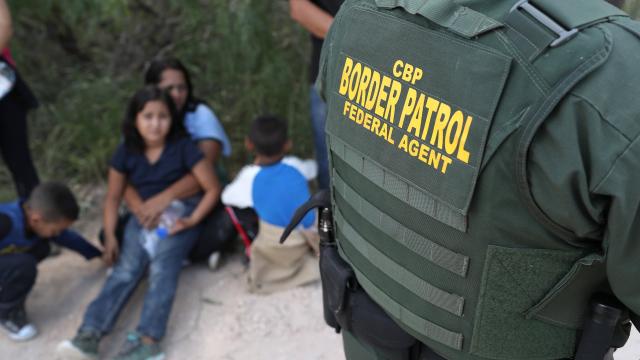 Silicon Valley technology corporations including Amazon, Palantir and Microsoft make millions from US immigration enforcement, according to a new report.

They provide tools that aid surveillance, detention and deportation of individuals targeted by Donald Trump’s anti-immigrant agenda, according to a paper published Tuesday by a coalition of immigrant rights groups. The report outlined ways Immigration and Customs Enforcement (Ice) has expanded its reach, with infrastructure from tech companies that have faced growing internal and external pressure to cancel their contracts.

“During this time of continued escalated abuse by Ice and the Department of Homeland Security (DHS), we’ve been frustrated, scared and shocked by the level of secrecy around how many of these tech contracts are procured,” said Jacinta Gonzalez, an organizer with Mijente, one of the not-for-profit groups behind the report. “These technologies are being used in real time, and so many companies are profiting.”

The report – produced by research firm Empower LLC and commissioned by Mijente, the National Immigration Project and the Immigrant Defense Project – also explained how the tech lobby has pushed for “cloud” data storage policies over the years, paving the way for its contracts and services that now power Ice operations.

In the last year, tech companies have increasingly come under fire for the harmful ways their platforms and products are used, whether to expedite Trump’s deportation operations, to help the government recruit border patrol agents or to create entirely new systems of border surveillance.

Amazon Web Services (AWS), a subsidiary that sells cloud computing services, is facing renewed scrutiny over its government contracts, especially after its CEO Jeff Bezos, the richest man in the world, has positioned himself as a philanthropist and ethical leader on labor issues.AWS serves as the “key contractor” for DHS’ migration of its $6.8bn information technology portfolio to the cloud, the report said. Amazon has more federal authorizations to maintain government data across agencies than any other tech firm. That includes support of DHS’ data storage for immigration case management systems and biometric data for more than 200m identities. AWS stores cloud data for a system that “processes more than 300,000 biometric transactions per day” and uses the information to “detect and prevent illegal entry” into the US, according to DHS.

AWS has a justice and public safety program that also sells cloud services to state law enforcement agencies that may share information with DHS, the report noted. Bezos’ company faced intense scrutiny earlier this year when public records revealed that the corporation was marketing and selling facial recognition software to police.

“Amazon Web Services is the backbone for so many of these systems,” said Gonzalez.

The fiscal year 2019 budget includes an Ice technology modernization program worth $24.6m, a “biometric matching service” investment of $97.2m and an automated identification system of $11.9m. AWS and Palantir are partners in those efforts.

Amazon and Microsoft were also part of a cloud computing caucus group that partnered with Congress and pushed for a new law that reformed federal IT acquisitions and, according to the report, gave Silicon Valley “influence over the contracting of its own services”.

DHS also has agreements for biometric information sharing with the Mexican government, relying on a cloud-based application that has partnerships with AWS and Microsoft Azure, a cloud computing service. This relationship sparked internal backlash from Microsoft employees earlier this year, prompting its CEO Satya Nadella to try to downplay the significance of his company’s relationship with Ice.

Microsoft also has a DHS contract that includes cloud migration services through 2020, the report said.

Microsoft declined to comment, providing a statement from July that said its Ice contract was for email, messaging and “document management workloads”, adding: “Even at a time of increasingly polarized politics, we have faith in our fundamental democratic institutions and values.”

Amazon and Palantir did not respond to requests for comment.

Gonzalez noted how unsubstantiated allegations of “gang affiliation” can lead to the deportation of undocumented people – information that the tech firms help store and make accessible to authorities.

“It is their ability to scale up enforcement and scale down due process – they are using technology for that,” said Gonzalez. “The workers inside of those companies [need] to see the consequences of what they are doing.”