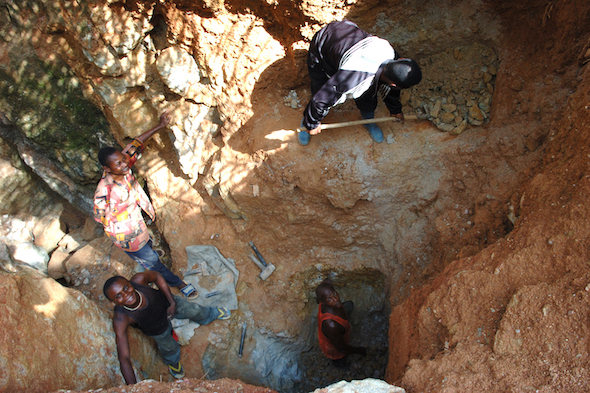 The Democratic Republic of Congo is paying the price for being the world’s largest producer of raw cobalt, a vital ingredient in lithium-ion batteries for electric cars, smartphones, laptops and other rechargeable devices. As Congolese search for the valuable mineral—cobalt is the most expensive part of lithium-ion batteries—they are suffering a surge in child labor, poverty, pollution and rare birth defects.

An investigation by The Washington Post unravels the complicated cobalt supply chain from mines in Congo to the world’s largest cobalt producers in China to the products that dominate Americans’ everyday lives. Reporter Todd Frankel found that companies such as Samsung, BMW and Apple buy batteries containing cobalt mined in Congo but declare that their products are free from materials related to human rights abuse. Ford and General Motors say their batteries do not contain cobalt from Congo, according to their battery supplier, LG Chem—though analysts have expressed doubts about this claim.

Cobalt is not listed as a “conflict mineral” (a mineral that finances conflict) under theDodd-Frank Act of 2010, which requires “certain companies to disclose their use of conflict minerals if those minerals are ‘necessary to the functionality or production of a product.’ ”

Conflict resources in Congo are financing “the deadliest war since World War II,” according to CBS News, but cobalt mines are not believed to play a role in the war.

“We are suffering, and our suffering is for what?” one 29-year-old digger told The Washington Post. He and other so-called artisanal miners, who sell cheaper materials than industrial mines, make $2 to $3 on a good day, he said. Toxic levels of metals in mining regions such as Lubumbashi create breathing problems and rare birth defects in newborns. Meanwhile, refined cobalt has gone up from $20,000 to $26,000 per ton in the past year.

Still, in an effort to deter militia control of Congolese mines, tantalum, tin, gold and tungsten are the only minerals to which the Dodd-Frank Act is applied. American companies “must exercise due diligence on the source and chain of custody of their conflict minerals,” including conducting an independent audit after determining whether their products are “DRC [Democratic Republic of Congo] conflict-free,” the U.S. Securities and Exchange Commission says.

Very few of the 1,300 companies that file conflict minerals reports every year have been able to investigate their entire supply chains and determine their materials to be 100 percent conflict-free, Bloomberg reports. Apple is one company that claims to oversee its entire supply chain, having announced in March 2016 that it now audits all of its suppliers’ use of conflict materials. However, it does not label its products as conflict-free.

Apple will categorize cobalt as a conflict mineral beginning in 2017, according to Paula Pyers, a senior director at Apple Inc.

A mine inspector said companies that buy artisanal cobalt “don’t care” about quality of life in mining regions. “If you bring them minerals and you’re sick or hurt, they don’t care,” he said.

A government official in mineral-rich Kolwezi admitted that children work in mines where there are frequent underground fires and mining-related deaths. Cobalt-buying companies “have an obligation to create wealth in the area where they operate,” he said, asserting the government is too poor to address issues like pollution and child labor.

Congo DongFang International Mining (CDM), the top artisanal cobalt exporter, supplying some of the largest battery manufacturers in the world, claimed “it had incorrectly assumed that these issues were the concern of its trading partners, who buy the cobalt from the miners and pass it on to the mining company.” CDM’s parent company, Huayou Cobalt, plans to help clean up the cobalt supply chain by hiring a supervisory company and working with clients such as Apple.

Huayou’s president told the Post, “Some companies just want to get away from the problem, but Congo’s problem is still there. The poverty is still there.”

Pyers took a humanitarian stance in defending Apple’s role in the region: “If we all cut and run from the Democratic Republic of Congo, it would leave the Congolese people in a devastating position. And [Apple] will not be a party to that here.”