Tech Workers Are Workers, Too

Above Photo: Staff at work in the offices of Alibaba in Beijing. Guang Niu / Getty Images.

Tech workers in China and the US recently united in the largest display of tech worker solidarity we’ve ever seen. It’s exactly what we need to prevent a global race to the bottom in tech.

Over a decade after the 2008 financial crisis, the cracks in our neoliberal economy are still glaringly apparent. Multinational corporations continue to exploit cheap labor from around the world, and inequality has only worsened. To maintain this system, many leaders in the West have turned to nationalism to justify the economic plundering of other countries.

Donald Trump’s presidency marks a new era of sinophobia. Even before entering the White House, he attacked China for stealing US companies’ intellectual property, accused it of “raping” the US with unfair trade policies, and — most importantly for his targeted audience —blamed it for the theft of American jobs. The hostility has only worsened since he took office. From battling over 5G technology to the seemingly endless trade war, news about China continues to saturate American media.

But anxiety of China’s economic growth didn’t begin with Trump. For decades, Western media has churned out dystopian depictions of China. It has been portrayed as everything from a backward country with a disastrous human-rights record to a digitally powered authoritarian state that threatens American freedom. And while international criticism of the use of technology in China is often warranted, the narrative of American media is usually much simpler: The less free China looks, the more free America appears.

This is the calling card of nationalism — that China is a growing menace, sucking jobs away from US workers.

By dehumanizing foreign workers and pitting them against domestic workers, corporations are able to rationalize inhumane labor practices abroad. But most dangerous for workers is that nationalism pushes us to think that we have more in common with our bosses than with workers beyond the border.

In order to truly raise living standards, we have to break out of this “us vs them” mentality and build solidarity with workers around the world. Otherwise multinationals will continue to outsource labor and suppress wages in a race to the bottom.

Last month, tech workers in China put together a project on Github, a global software service and code collaboration platform, calling for companies to end “996.” Chinese tech workers have coined the term to describe the grueling practice of working 9 AM to 9 PM, six days a week.

In the span of a few weeks, the 996.ICU GitHub project became the second most popular GitHub project of all time, swiftly overtaking some of the most well-funded open-source projects in the tech community. In terms of sheer quantity, it is the largest demonstration of collective action the tech world has ever seen: more than 230,000 tech workers (mainly in China) have “starred” the project on GitHub.

A few weeks after the 996.ICU project’s release on GitHub, the tech companies Tencent and Alibaba blocked the project on their web browsers — a blatant attempt to censor the effort. Their attempts to quash the project proved ineffective, though, as both companies only boast a minority share of browser usage in China. The best way to censor the project was to do so directly at the source. Since the code-sharing platform is owned by Microsoft, they would need the Washington-based company to remove the project on GitHub.

Aware that Microsoft was likely already facing pressure to censor the project, Microsoft workers released a letter, published on GitHub, demanding that the company keep it uncensored and accessible. The letter called on other tech workers around the world — Github’s primary user base — to join them.

But the letter wasn’t just about keeping the 996.ICU GitHub project alive. It soon became a platform for international tech workers to stand behind their Chinese counterparts fighting for better working conditions.

Written in both English and Chinese, the letter states:

The code-sharing platform GitHub, owned by Microsoft, is a place for developers to save, share, and collaborate on software projects. Most important for the 996.ICU movement is that GitHub is accessible in China. It is the dominant platform for developers to collaborate and is a crucial part of Chinese tech companies’ daily operations. Since going viral, Chinese domestic browsers, such as those by Tencent and Alibaba, have restricted access to the 996.ICU repository on their web browsers, warning users that the repository contains illegal or malicious content. We must entertain the possibility that Microsoft and GitHub will be pressured to remove the repository as well.

In response to these events, we, the workers of Microsoft and GitHub, support the 996.ICU movement and stand in solidarity with tech workers in China. We know this is a problem that crosses national borders. These same issues permeate across full time and contingent jobs at Microsoft and the industry as a whole. Another reason we must take a stand in solidarity with Chinese workers is that history tells us that multinational companies will pit workers against each other in a race to the bottom as they outsource jobs and take advantage of weak labor standards in the pursuit of profit. We have to come together across national boundaries to ensure just working conditions for everyone around the globe.

We encourage Microsoft and GitHub to keep the996.ICU GitHub repositoryuncensored and available to everyone.

Within the first week, nearly eight thousand people starred the letter. In addition to tech workers in the US, employees in Turkey, Singapore, the UK and many others all signed the GitHub letter with their names, roles, and company affiliations. Tech workers from France and Spain also translated the letter and added it to the GitHub page.

Excited at the support they were getting, Chinese tech workers started to become active themselves, leaving comments of gratitude and adding their signatures. Discussion filled the project’s Issues page, a section on GitHub projects used for conversation. Commenters compared working conditions between the US and China, and shared employment experiences at different tech companies around the world. One user even posted the lyrics to the Internationale with both English and Chinese translations. 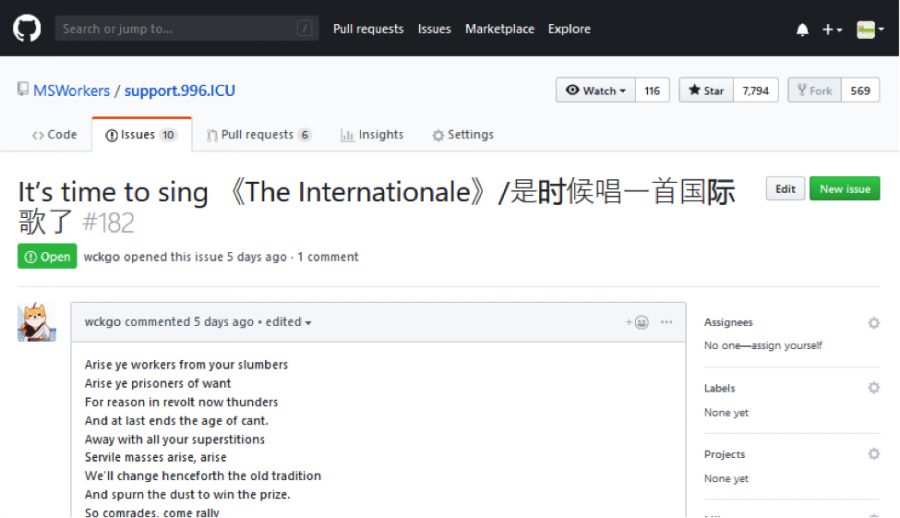 The Chinese economy is slowing down, and the demand for tech labor is dropping, allowing tech bosses to gain more leverage over their employees and making it harder to fight against the 996 working schedule. In the past year, Tencent, JD.com, Didi, and other Chinese tech giants have laid off hundreds of employees, slashed perks, and limited bonuses.

And these conditions are not unique to China. While the US may seem to have an insatiable hunger for tech labor, it’s hardly inevitable. Should the supply for tech labor catch up to demand or the demand for tech labor contract, US tech workers would also see their bargaining power wane. Tech companies would no longer need to lure employees with office perks, high salaries, or the promise of a healthy work-life balance. Working conditions in US tech could come to resemble those that Chinese tech workers are protesting.

Already, the invisible army of contract tech workers employed by companies like Google face poor working conditions and low pay — a far cry from the conventional portrait of tech work as cushy and well-paying.

Fighting sexism in the industry is another cause that American and Chinese tech workers will have to take up. From the Google Walkout to the email threads calling out gender inequality at Microsoft, tech workers in the US have won some battles against a sexist tech culture. But there are still enormous issues, and sexism in tech is not just an American problem. It’s deeply embedded in the mandated 996 working schedule in China, which make it even more difficult for working women to complete the “second shift.” In patriarchal China, the longer the hours the larger the income gap — and the more oppression women face.

But there are glimmers of hope. Most recently — and on international workers day no less — Googlers organized a company-wide sit-in to protest retaliation against workers. The action drew the attention of Google employees around the world — and with good reason. Tech everywhere face the same risks for speaking up and organizing.

Developing these connections will be crucial for building lasting solidarity. Despite the efforts of business and political elites to play workers against each other, we must look for common ground, share our tactics, and constantly learn from each other. Only then can we fend off the noxious nationalism that threatens the livelihoods of tech workers everywhere.