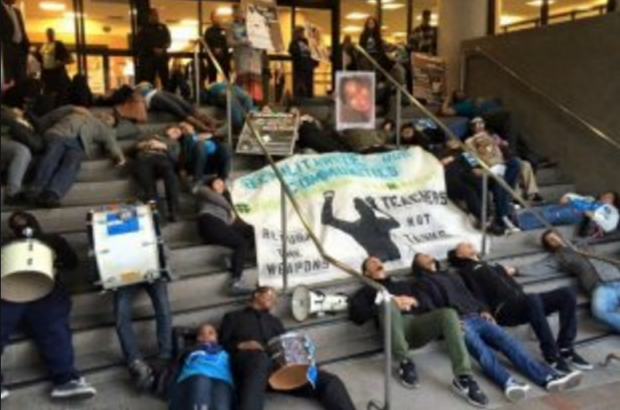 Teenagers Got Police To Remove Military Weaponry From Schools

Above Photo: Courtesy of the Labor Community Strategy Center

A coalition of Los Angeles high school students and grassroots organizers just accomplished the unthinkable. After nearly two years of sit-ins and protests, they forced the police department for the second-largest public school district in the United States to remove grenade launchers, M-16 rifles, a mine-resistant ambush protected (MRAP) vehicle and other military-grade weaponry from its arsenal.

But the coalition did not stop there. Members took over a Los Angeles Unified School District (LAUSD) board meeting in February to call for proof that the arms had been returned to the Department of Defense—a demand they eventually won in the form of an itemized invoice for every weapon sent back to the DoD.

Going further, the coalition successfully pressed board members of the school district to apologize for greenlighting the policing of K-12 students with weapons of war.

“I now understand that especially in the context of the many conflicts between law enforcement and communities of color across the nation, our participation in this program may have created perceptions about the role of our district and our school police that my silence exacerbated,” Steve Zimmer, the president of the board of education, wrote in a May 19 letter to the groups Fight for the Soul of the Cities and Labor Community Strategy Center, which played a key role in the campaign. “Please accept my apology for any and all of my actions that contributed to feelings of betrayal and injury and interrupted our important collaborative efforts for equity and justice in all aspects of public education.”

Perhaps most stunningly, the coalition eventually persuaded the Los Angeles School Police Department to issue its own apology. “The LASPD recognizes the sensitive historical aspect of associating ‘military-like’ equipment and military presence within a civilian setting,” wrote Chief Steven Zipperman in a letter dated May 18. “We recognize that this sensitive historical component may not have been considered when originally procuring these type of logistics within a civilian or K-12 public school setting.”

The resounding victories were won in a district where the vast majority of students are Black and Latino. In the era of Ferguson, they have seen images of young people who look like them being shot and killed by police. Amid mounting nationwide outrage over police use of weapons of war to patrol civilian neighborhoods, the win marks an unprecedented stride toward the demilitarization of public schools.

“I know that this will transcend my school district and state,” Bryan Cantero, a senior at Augustus F. Hawkins High School, told AlterNet. “I feel like I was part of something that is bigger than me. I prevented something terrible from happening to someone’s brother, sister, friend or daughter. We prevented a tragedy. We prevented a war. When the police got those weapons it was a call to war. Am I viewed as a student or prey? What do they think I am? At the end of the day, something had to be done, and we took charge.”

The Strategy Center describes itself as a movement-building think tank “rooted in working-class communities of color.” According to director Eric Mann, the organization first discovered that the Los Angeles Police Department possessed an arsenal of military-grade weapons two years ago. At the time, Mann and his colleagues had just returned from a solidarity delegation to Ferguson in 2014, where they witnessed the deployment of tanks and assault rifles against civilian protesters. Mann said the delegation “understood this was part of the war against Black people.”

The revelation that Los Angeles school cops were in possession of military arms immediately provoked a civil rights uproar. Yet, in September 2014, the school district and police department refused to return all of the weapons, agreeing to hand back grenade launchers but insisting they needed armored vehicles and rifles. “While we recognize, this armored vehicle is ‘military-grade,’ it is nevertheless a life-saving piece of equipment that the District would not otherwise have,” the school district stated.

The subsequent campaign “took a lot of work and time,” Ashley Franklin, lead organizer for the Strategy Center, told AlterNet. “We organized on each of the blocks we work in, organized in different high school campuses, going in and doing classroom presentations at the school about how this is rooted in institutional racism. We had phone call campaigns, turned in 3,000 petitions and made over 300 calls to school board members. It was a long campaign, and those were just the easy tactics.”

Taking Action clubs at multiple high schools in the district played a critical role. “Young people decided to put their bodies on the line, following after Malcolm X and Fannie Lou Hamer,” Franklin said. “They did multiple sit-ins at the school board and disrupted meetings, declaring that this should not be business as usual.”

At the early February school board meeting takeover, students and activists refused to leave until their demands were heard, leading to a charged scene described in the L.A. Times. “Asst. Supt Earl Perkins hurried forward and motioned to camera operators, with a hand slashing across his throat, to cut the live video feed while meeting chairman and board member George McKenna tried to establish order,” wrote journalists Sonali Kohli and Howard Blume. When administrators eventually left the meeting, students and activists remained, declaring the gathering a ‘people’s school board.'”

Monique Jones, a junior at Augustus F. Hawkins High School, was one of the young people who took action. “I believe the campaign was important because every day somebody of color, Black or Latino, is being shot by police officers,” she told AlterNet. “Why would you bring those types of weapons into school campuses? It’s not a war zone. You’re not going to war with your own citizens and people who are in kindergarten through 12th grade.”

Some board members appear chastened by the exchanges they have had with students like Jones. In an apology letter dated April 22, LAUSD school board member Monica Garcia declared, “The need for safety is a collective responsibility that must balance our lessons learned from history, our present challenges and our vision for the future… Together, with community partners, LAUSD has come a long way. And to use the words of the great Dr. Martin Luther King Jr., ‘we have a long way to go.’”

Despite the Los Angeles victory, police departments nationwide remain heavily militarized. This is largely because of the federal program that allows police agencies to acquire weapons of war. The current iteration of the initiative dates back to 1990 and was escalated by the 1997 National Defense Authorization Act, which established that, under the “1033 program,” Department of Defense may transfer “excess” military equipment to state and local law enforcement agencies. According to the Defense Logistics Agency, the program has transferred at least “$5.4 billion worth of property” since its inception.

However, the actual amount of public dollars that have been funneled into this program is far higher. A report from the Center for Investigative Reporting in 2011 found that since 9/11, “$34 billion in federal government grants” has gone toward the purchasing of military-grade weaponry for police departments. As in Los Angeles, many of these weapons have found their way into school police departments. The police department for San Diego’s public schools revealed in 2014 that it had also purchased its own MRAP, a piece of equipment that has become a fixture of the U.S. military’s occupation of Iraq and Afghanistan.

The 1033 program is just one facet of the militarization of police departments nationwide, which also includes SWAT deployments for drug searchers and collaborations between police agencies, arms manufacturers and foreign militaries. An ACLU report released in 2014 found that the “use of hyper-aggressive tools and tactics results in tragedy for civilians and police officers, escalates the risk of needless violence, destroys property, and undermines individual liberties.” Poor people and communities of color disproportionately see their neighborhoods turned into war zones by police, the investigation determines.

Last year, President Obama issued an executive order placing some limits on the transfer of certain kinds of military weapons, referencing the demands of civil rights leaders and Ferguson protesters. However, he declined to eradicate the program or immediately recall all of the heavy arms that have been distributed to police departments across the country.

High school senior Cantero believes Obama’s order does not go nearly far enough. “The 1033 federal program still exists in the nation, and I think the following step is to abolish the program in its entirety,” he said. “No school should have military-grade weapons. We want police military weapons destroyed.”

“When you are a teen you feel like you have no control over anything,” he continued. “But what is amazing to me is that there were so many teenagers all over the city who felt the same way we did and stood up together. Power in numbers is an amazing thing. This is a national problem at the end of the day, because this is what the youth is going through. We’re not going to stop.”