Teens Less Likely To Use Cannabis When It’s Legal, US Study Finds

Above Photo: GETTY IMAGES. Recreational cannabis is legal in 10 US states

Teenagers are less likely to use cannabis in places where the drug has been legalised, a new study suggests.

Researchers at Montana State University looked at health surveys of US high school pupils between 1993 and 2017.

While overall use among US youth went up, the likelihood of teen use declined by nearly 10% in states where recreational use was legalised.

Cannabis use remains illegal in all states for people under the age of 18.

Lead author of the study Mark Anderson told the Associated Press that the study, published in the medical journal Jama Paediatrics, “should help to quell some concerns that use among teens will actually go up”.

His team analysed data on about 1.4 million teenagers in the US, taken from the Youth Risk Behaviour Surveys, an annual national survey carried out by the US Centres for Disease Control and Prevention.

Dr Anderson said it was usually harder for teens to buy from licensed dispensaries – where proof of age is required – than from dealers, which could partly explain the drop. Cannabis sold in dispensaries is also often more expensive.

Dr Anderson said that the researchers did not find a change after medical cannabis was legalised – only when the drug was legalised for recreational purposes. 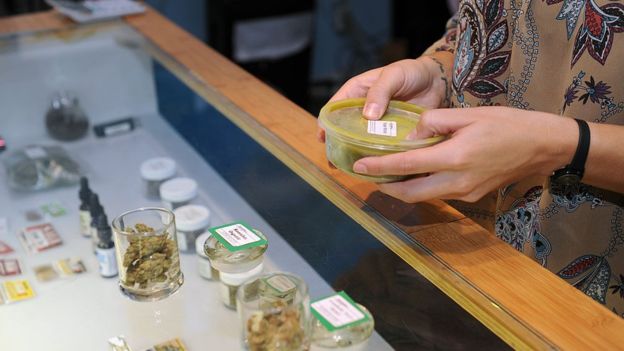 GETTY IMAGES. It may be harder for teenagers to buy from licensed dispensaries

The results echo those of a previous study, published last December, that found cannabis use among teens in Washington dropped after the state legalised the drug in 2012.

But the results contradicted a 2018 study from Colorado which found that the number of high school pupils who said they used cannabis stayed the same after recreational use was legalised in that state in 2014.

Dr Anderson told the US broadcaster CNN that, because most states that have legalised cannabis did so recently, the team would need to continue to track the data and update their findings “in a few years”.