Above Photo: The logo of the social network “Facebook” is reflected in the pupil of an eye. (Photo: Joerg Koch/DAPD)

Facebook periodically “tweaks” its algorithm in ways that severely reduce the prominence of alternative media content on newsfeeds, forcing admins to pay for “sponsored posts” in order to reach audiences.

QUITO, ECUADOR — Facebook users who followed Latin American news outlet teleSUR English were confused on Tuesday when the fan page suffered a mysterious disappearance from the site that lasted nearly a full day. The page’s deletion and subsequent reemergence raised questions about potential censorship by the California-based social networking giant, which has previously acted at the behest of repressive governments and faces pressure from U.S. officials and traditional media to crack down on so-called “fake news.”

The page has a modest presence on Facebook – about 400,000 followers – as well as millions of social media interactions, such as comments, likes, shares and views. The page also hosts tens if not hundreds of hours of originally-produced video content — including original programs, documentaries, and tightly-edited one-minute clips.

Sources in teleSUR English’s newsroom seemed blindsided by the page’s removal, which appeared to take place at approximately 1 p.m. CST. Staff expressed shock and annoyance at what seemed like the unilateral deletion of an important driver of traffic to the outlet’s website. Others suspected that perhaps there was some unfathomably ridiculous error made by the company’s in-house servicios team.

We are witnessing unprecedented censorship in the United States. The 1st Amendment has always been limited for most, due to our lack of resources and platforms, but this is now blatant expulsion of any and all sources that fall outside the realm of the capitalist media conglomerates. Take note as the empire continues to unravel before our eyes, and its benefactors scramble to keep it intact.”

Users who had “liked” the teleSUR English page found that they were now following the Spanish-language page, creating the impression that Facebook conducted a silent, forced migration of TSE fans to the Spanish hub.

“Facebook has taken down the page of teleSUR English, the organization I work for,” teleSUR English web director Pablo Vivanco tweeted. “We were not given notice nor were we informed as to why this happened.”

By about 10 a.m. the next morning, however, the page suddenly reappeared. A status update was posted thanking followers for their concern and revealing a lack of correspondence from Facebook, noting that the social media team “still don’t know what exactly happened and (we) are looking into it.”

In a statement quoted in Newsweek, a Facebook company spokesman apologized and claimed the page was “was temporarily unavailable due to an internal mistake.”

The page’s removal coincided with an announcement by Venezuela’s National Constituent Assembly that presidential elections would be held April 30, where President Nicolas Maduro will seek a second term.

It also came a few days after Facebook CEO Mark Zuckerberg unveiled new changes to the way in which Facebook would rank news content on the site, tasking users with determining which news websites and pages are credible due to the company ostensibly feeling discomfort about judging which sources are trustworthy in a “world with so much division.”

However, the social networking behemoth hasn’t always felt the same level of reticence about arbitrarily removing content from the site, especially when it comes to pages that reflect leftist or non-mainstream perspectives. 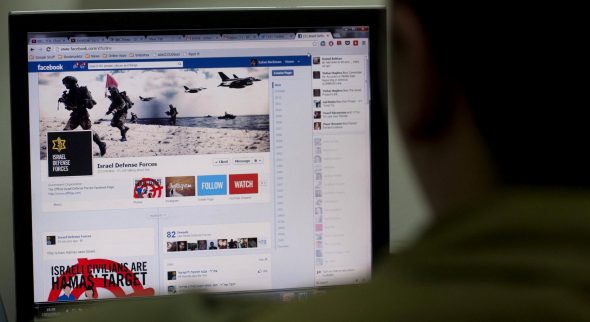 An Israeli soldier looks at the Facebook page of the IDF, at the IDF spokesperson’s office in Jerusalem, in the Occupied Territories. (AP/Sebastian Scheiner)

In July 2016, relatives of Israelis slain in a Palestinian operation sued Facebook for $1 billion in a New York State District Court, alleging that the tech giant had violated the Anti-Terrorism Act by allegedly providing a platform for radical Palestinian resistance groups to launch violent attacks and take part in “recruiting, radicalizing and instructing terrorists.”

Months later, the company reached an agreement with Tel Aviv to more closely police content posted by Palestinian residents in the occupied territories. Facebook pledged to carve out a “safe” space for the Israeli occupation:

We want people to feel safe when using Facebook, and for that reason, we’ve developed a set of community standards which make it clear there is no place for terrorists or content that promotes terrorism on Facebook.”

The new rules led to an immediate censorship frenzy that shut down the Hamas-affiliated Shehab news agency – which had 6.3 million page likes – and Quds News Network, which enjoyed 5.1 million likes. Several members of the pages’ editorial teams were also suspended from accessing their personal accounts. Facebook later restored the pages and accounts, claiming in a statement that the removals were accidental and resulted from users alleging the violation of community standards.

At the time, Israeli Minister of Justice Ayelet Shaked, of the extremist Israel Home party, bragged that the tech company honored 95 percent of the 158 requests submitted by Tel Aviv. Palestinian civil society groups didn’t fail to note Facebook’s egregious double standard — as it refused to lift a finger in response to complaints about blood-curdling content by far-right Zionist politicians and extremist settlers posting hateful messages, calls for violence, and open threats against the local Arab population.

This past month, community-run “Leftbook” pages – an online genre poking fun at racists, anti-gay bigots, and U.S. capitalism, among other targets –  were unpublished without warning, with admins facing up to 30 days of suspension on the site for using playful pejorative phrases like “cracker” that were deemed to be in violation of company rules. Users claimed this was proof that Facebook freely allows cyber-bullies and extreme right-wing pages to use the social media platform with impunity, while leftist pages are expected to strictly abide by the inscrutable and unevenly-enforced “community standards.”

Accusing the Mark Zuckerberg-owned company of catering to “the most socioeconomically privileged” users, leftist blog “Friends of the People” noted the irony of removing pages that expose bigots while leaving “racist, sexist, homophobic” content on the web.

teleSUR English has been no stranger to the whipped-up controversies surrounding pro-Palestine social media and leftist Facebook pages. 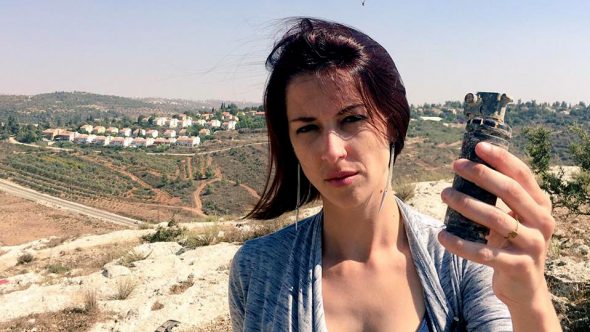 Abby Martin holds up an Israeli tear gas canister during a visit to the Occupied Territories. Israeli officials told the teleSUR host her application for a press pass to enter Gaza was being probed due to teleSUR’s alleged ties to Iran. (Photo: teleSUR)

Founded in 2014 in Ecuador’s capital Quito as an offshoot of Caracas-based Spanish-language broadcaster teleSUR, teleSUR English is reviled by opponents of the socialist government of Venezuela. TeleSUR has even been called “al-Chavezeera,” a portmanteau combining the name of Qatar-owned news network Al Jazeera and the name of Venezuela’s late leader of the Bolivarian Revolution, Hugo Chavez.

The Quito-based outlet is regularly depicted by mainstream media and detractors as President Nicolas Maduro’s vulgar propaganda mill. The site has also faced incorrect allegations by the Israeli government that it is  “associated with the government of Iran, an enemy country under the Israeli law.”

The site features content from an eclectic range of personalities spanning the left — including Tariq Ali, Jose Maria Sison, Cindy Sheehan, Ramzy Baroud, Abby Martin, Vijay Prashad, and the author of this article. Far from the stereotypical “regime mouthpiece” some would like to depict, the page has even published material criticizing the Venezuelan government “bureaucracy,” in addition to other writings that give the lie to the one-dimensional “propaganda” caricature.

In spite of that, Facebook continues to face pressure demanding that it comply with Washington’s policy requirements, especially amid the persistent allegations of Russian interference in the 2016 U.S. elections.

Last month, The Washington Post reported that Chechen President Ramzan Kadyrov had his account deleted on Facebook-owned photo-sharing app Instagram, primarily because of his inclusion on the U.S. sanctions list. The article asks “why only” the Chechen “strongman” faced the ban while Iranian General Qassem Soleimani, Venezuelan President Maduro and various Russian officials were still allowed access to the platform.

A warning: Don’t get too comfortable

Facebook also periodically changes its algorithm in ways that severely reduce the prominence of alternative media content on newsfeeds, forcing admins to pay for “sponsored posts” in order to reach audiences. Posts that would have previously gained “likes” in the triple-digits begin to drastically underperform. This has had an especially harmful effect on teleSUR English as well as on MintPress News, RT, World Socialist Website, and other non-mainstream and progressive pages accused of proliferating “fake news.”

Coupled with Google’s own similar measures, one sees a clear picture of Silicon Valley collusion with Washington in a bid to stifle the “disruptive” role played by new media – that same “disruption” we have heard the TED Talks yuppies extol. The same online disruption the mainstream media celebrates in countries like Venezuela or Iran.

Maybe teleSUR English’s night in Facebook jail was not the foray into censorship it seemed. Maybe it was triggered by a mob of detractors reporting its page for violating community standards. Maybe it was a trial balloon to gauge how the 400,000 followers of the page would respond to their vanishing news. Or maybe it was a mistake – the servicios team in Caracas slipped on a banana peel, or Zuckerberg fell into his keyboard and bumped into the “delete” key with his big head.

But that’s all just conjecture.

What’s certain is that the 21-hour disappearance of teleSUR English is a warning of which media workers and end-users should take heed.

As unthinkable as it may seem in the short-term, journalists and advocates who fight for true systemic change should be prepared for the possibility that we won’t always be able to rely on the tender, loving hospitality of Mark Zuckerberg, Jeff Bezos, and Uncle Sam.