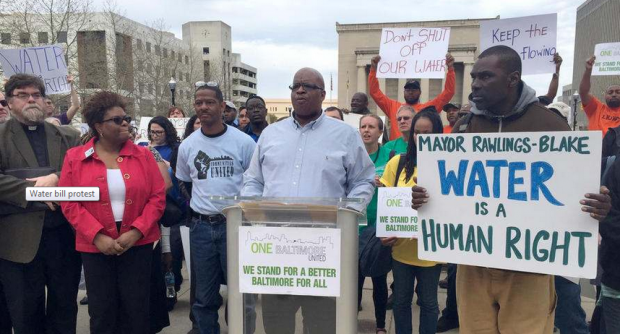 Above photo: Damien Henson (at podium), 43,of Edmonson Village, says he received a water turn-off notice from the city over what he believes is an erroneous bill. (Luke Broadwater, Baltimore Sun).

On April 1, Baltimore started turning off water to 150 households a day. The city plans to turn off 25,000 residences in total. There are commercial and public entities in Baltimore that owe $15 million, but they are not losing their access to water.

Baltimore has a history of overcharging residents. This resulted in a $4.2 million refund to about 38,000 residents in 2012.

Beginning in July 2013, Baltimore is raising water rates by 42% over a three year period.

Advocates say that the city’s programs to assist residents are burdensome and inadequate. There is a one time grant of about $160 available for those who qualify.

Residents of Baltimore are concerned about the water shut offs for a number of reasons. Questions have been raised about whether this is a move to privatize the city’s water system and whether the shut offs are related to gentrification efforts.

Residents are organizing to fight back. We need your help. Please sign the petition below and spread the word. And consider making a donation (choose Baltimore). CLICK HERE to donate.

By Luke Broadwater in the Baltimore Sun

Damien Henson, 43, says he is a hard worker who always paid his bills on time.

But when his water bills spiked wildly, the Edmondson Village man thought it better to contest them than pay. Now he’s received a turn-off notice from the city saying he owes $3,700.

“They tell you, ‘Pay the bill.’ The rest is on you,” says Henson, a married father of one who manages a Wendy’s. “I feel like it’s pretty ridiculous I have a $3,700 water bill. We have a lot of unanswered questions. We need answers.”

Henson was among 50 protesters who gathered Thursday outside City Hall to object to the city’s decision to send turn-off notices to about 25,000 customers who owe a combined $40 million in long-overdue bills. City officials say they will shut off water to customers with unpaid bills of over $250 dating back at least half a year . The notices include an estimated turn-off date, generally within 10 days of receipt.

This month, the city says, it began shutting off about 150 water accounts a day.

The protesters – a coalition of unions, advocacy groups and religious organizations – called on the city to collect overdue bills from commercial accounts before going after residents. They demanded the city impose a moratorium on water shut-offs until officials do more outreach and come up with a plan that protects renters if their landlords don’t pay water bills.

The city’s public works director defended the turn-off program Thursday, saying it’s necessary to stop freeloaders from taking advantage of the system [read: families hurt by the financial crisis who can’t afford the elevated rates]. He said payment plans and grants are available for low-income residents.

“Nobody likes to have their water turned off,” said director Rudy Chow. “But it is an unfortunate fact of doing business that some customers fall behind on their bills. Standard industry practice is to turn off those customers who do not pay.”

Chow said renters who receive turn-off notices should “be in communication with their landlords” to get them to pay the city.

Over the past two years, the problem of unpaid water bills has grown in Baltimore. As of April 2013, about 19,500 customers owed $29.5 million, records show. Since then, the amount owed has grown by nearly 40 percent.

In 2012, a review by the Baltimore Sun found that some big businesses, government offices and nonprofits had run up more than $10 million in unpaid water bills.Today, just 369 of the past-due accounts are commercial properties, but they make up $15 million of the missing revenue, city officials said.

The city has about 400,000 water customers, about half of them in Baltimore County.

Chow said the problem has grown in part because of a weak economic recovery in some Baltimore neighborhoods and because widespread water-billing errors in 2012 made officials reluctant to shut off water.

He said thus far this year, no properties that use commercial-size meters have had their water turned off, but said those that do not pay will face consequences.

“We are serious about collecting from commercial accounts,” he said. “Our water and sewer system will not give a free pass to large users only to be subsidized by the residential customers. We will not tolerate those who can afford to pay but choose to abuse the system.”

Chow said city workers will make at least two phone calls to businesses, government offices and apartment complexes with overdue bills before water is cut off. Customers who pay will have their water turned back on within 24 hours, city officials said.

The city has yet to release a list of which commercial properties owe the largest bills. The Sun has filed a public information request for that information. Chow said bankrupt RG Steel’s delinquent city water bills account for about $7 million of the uncollected funds.