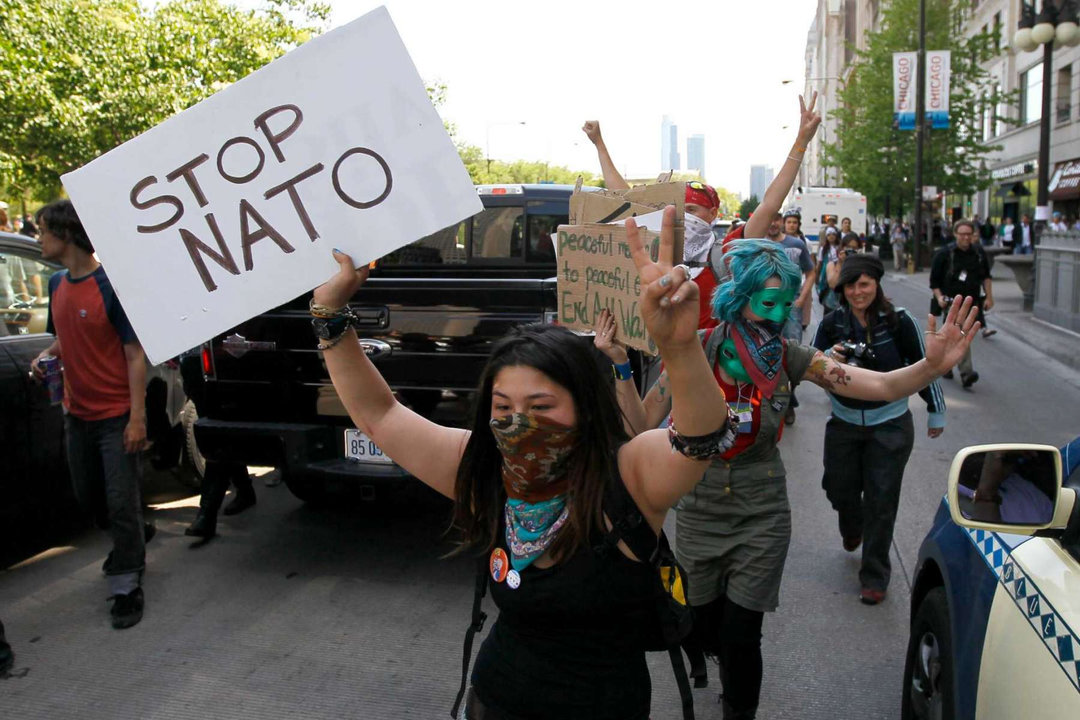 Tell Biden: No War! U.S./NATO Hands Off Russia And Donbass!

Above Photo: Protest against NATO Summit in Chicago, May 2012.

U.S. imperialism is playing with fire in Eastern Europe. U.S. officials are toying with the lives of millions of people in Europe, Asia and potentially the entire world with their unprecedented campaign of threats, provocations and war propaganda aimed at the Russian Federation.

The Biden regime and corporate media are lying when they warn of an “imminent” Russian invasion of Ukraine. The real danger of invasion comes from the U.S.-supported, NATO-armed Ukrainian government against the peoples of the independent Donbass republics of Donetsk and Lugansk on Russia’s Western border.

Wall Street, its bought-and-paid-for politicians and the Pentagon have long sought to dominate all of the former Soviet Union, including Russia. Big Oil is especially rabid to stop Russian oil and gas from reaching the European Union, so that erstwhile U.S. allies are forced to rely on their products instead.

Today the U.S. announced it was pulling diplomats’ families and other “nonessential personnel” out of Ukraine. It’s not because they are in danger from Russia. Rather, it’s another in a long line of war provocations by Washington and the NATO military alliance it dominates.

U.S. politicians are working to create a wartime atmosphere so that any defensive action by Russia or the Donbass republics, or a wholly manufactured incident, can be used to justify Ukrainian aggression and NATO intervention.

After a week of talks where Secretary of State Antony Blinken continued stonewalling Russia on its just demands for security guarantees against NATO expansion, and when Biden said at a news conference that his “guess” was that a Russian invasion of Ukraine was inevitable, it seemed on Jan. 21 there might be a glimmer of hope that the U.S. warmongers would take a step back.

Blinken finally agreed to Russian Foreign Minister Sergey Lavrov’s request to give a written U.S. response to Russia’s draft statement on security guarantees, more than a month after it was presented by Russian diplomats. At least, this would force Washington to declare its intentions in writing before the world rather than being shrouded in backroom negotiations and rumors circulated by unnamed sources in the Western media.

Instead of using this opportunity to step back from the brink of war, it now seems the U.S. and its allies are instead rushing recklessly ahead.

Along with the move to pull embassy personnel out of Ukraine, the weekend of Jan. 22-23 saw a new propaganda barrage from Washington’s junior partner Britain, alleging that Russian President Vladimir Putin was planning a coup to replace the current U.S.-backed Ukrainian government of President Volodymyr Zelensky with one friendly to Russia.

Moscow immediately refuted the claim. But it was taken as gospel by all the big-business media, despite the fact that, as even the New York Times admitted, “The British communique provided no evidence to back up its assertion.”

Meanwhile, another provocation was carried out by Kiev on Jan. 22, as a Ukrainian military sabotage team illegally crossed the ceasefire “line of contact” into the Lugansk People’s Republic and kidnapped a soldier of the People’s Militia. It was the third such kidnapping since October.

After a weekend at Camp David with his military and diplomatic advisers – when they were supposed to be preparing their written response to Russia’s draft security agreement – President Biden’s spokespeople announced that the administration was likely planning the deployment of thousands of additional U.S. troops and more military hardware to the region. A decision is expected from Biden this week, according to the New York Times.

While corporate media whip up fears because Russia has deployed approximately 100,000 troops to defend its Western border, they never mention that 125,000 Ukrainian troops – that is, half the country’s entire military – are now concentrated at the contact line with Donetsk and Lugansk, near Russia.

This fact cannot be ignored by the residents of Donbass or Russia, however. Especially since those deployed to the front are the most notorious ultra-nationalist, neo-Nazi Ukrainian battalions, armed with NATO-supplied weapons and trained by the U.S., British and Canadian military.

The Ukrainian fascists have been hell-bent on war with Russia since they toppled Ukraine’s democratically-elected government eight years ago. In keeping with their genocidal ideology, inherited from anti-Soviet Nazi collaborators of World War II, these armed groups regard the multinational, mostly Russian-speaking residents of Donbass as “cattle” and “insects.”

For weeks, U.S. media have published glowing accounts of how the CIA and other Western police-military agencies have been training these forces for “resistance” in the event of a Russian invasion. In fact, they are being armed and trained to launch a murderous attack on the population of Donbass.

Since Ukraine launched its war on the Donbass region in 2014, when its people voted overwhelmingly for independence, more than 14,000 people have been killed in the conflict.

Donetsk and Lugansk have warned for months about the dangers of a new Ukrainian invasion as the buildup of troops and heavy weapons unfolded. The last time Kiev invaded, in 2015, the People’s Militias routed the Ukrainian forces and handed them a humiliating defeat.

“In terms of the numbers, if we take personnel, then from the Ukrainian side [near the contact line] it is two-to-three times higher than ours,” explained Denis Pushilin, the Donetsk People’s Republic head of state, on Jan. 18. “The amount of equipment also exceeds ours. But we are at home, we are defending our land, so we have many more chances to resist.”

While the Donbass republics are confident in their ability to defeat the invaders again, as they did in 2015, the influx of NATO high-tech weaponry would mean massive devastation to the civilian infrastructure and high casualties in a region already suffering under a nearly eight-year economic blockade by Ukraine and the West.

And this time, the danger of direct NATO military intervention – forcing Russia to defend itself and potentially igniting a new regional or even world war – is very real.

Alexander Skubchenko of the Housing Union of Ukraine summed up the situation: “What is happening now is not an attempt by NATO to protect Ukraine from a Russian invasion – it is an attempt by Russia to protect the Donbass republics from Zelensky’s military adventure, which NATO is pushing him to do.”

A Jan. 22 Washington Post headline screamed, “Military trainers, missiles and over 200,000 pounds of lethal aid: What NATO members have sent to Ukraine so far.”

“Last December, the White House authorized a $200 million security assistance package that provides Ukraine with small arms and ammunition, secure radios, medical equipment and spare parts. Other lethal equipment, including Javelin anti-tank missiles and other anti-armor artillery, as well as heavy machine guns, also were included,” according to the Post. “The U.S. Embassy in Kiev said late Friday that a first shipment of nearly 200,000 pounds of lethal aid had recently arrived in Ukraine. …

“Canada also has a military training program with Ukraine, and Ottawa recently sent a small contingent of special forces to assist Kiev, according to Canadian media. The Department of National Defense declined to comment on potential troop deployments, citing operation sensitivity.

“The Baltic countries of Lithuania, Latvia and Estonia also have received permission from the Biden administration to send U.S.-made weapons, such as Stinger air defense systems and Javelins, to Ukraine, the countries’ defense ministers said Friday.

“Turkey, which has a sizable weapons manufacturing industry, has previously sold Bayraktar TB2 drones to Ukraine. The weapon has been used to strike Russian-backed separatists in eastern Ukraine [That is, the Donbass republics – including the murder of 5-year-old Vladik Shikhov by drone strike last April – GB].

“The Netherlands and Spain also have deployed warplanes and warships, respectively, to the region to support NATO,” the Post concluded.

“The United States and its allies have already delivered billions of dollars in military assistance to Ukraine, with Washington alone contributing about $400 million in 2021 alone,” Sputnik News noted on Jan. 18. “Total U.S. outlays have topped $2.5 billion since 2014, and have included ‘non-lethal’ items, such as Humvees and artillery-locating mobile radar, as well as lethal systems like U.S.-made sniper rifles and Javelin anti-tank missiles.

Significantly, Germany blocked Estonia from transferring German-manufactured artillery to Ukraine, as an incensed Wall Street Journal reported Jan. 21. NATO member Germany, the economic powerhouse of the European Union, is reliant on Russian gas and heating oil, and is eager for the completion of the NordStream2 pipeline to increase the flow of affordable fuel from the east – something the U.S. is desperate to stop.

Russia has made it clear that Ukraine’s takeover by NATO is a red line for its security and independence. Washington refuses to even negotiate on the issue of NATO’s further eastward expansion, despite the promise made by U.S. officials at the end of the Cold War not to do so – some 14 new NATO members ago!

Poor and working people are wracked with crisis after crisis here at home. Rampant spread of COVID and the deliberate dismantling of public health measures to control the pandemic. Wages slashed by inflation. Capitalism’s climate destruction intensifies by the month. The end of eviction moratoriums threatens the lives of hundreds of thousands of families in the dead of winter. Far-right attacks, from the streets to state legislatures to the Supreme Court, against voting rights, reproductive rights and trans rights.

U.S. war threats against Donbass and Russia are a greedy grab for profits and continued Pentagon military dominance. But they are also an ugly, xenophobic attempt to distract workers in the U.S. from fighting the bosses’ attacks on them, and instead turn us against people in other countries. The billionaires who dominate both the Democratic and Republican parties rely on this divide-and-rule strategy to maintain their power.

Don’t fall for it. Let’s fight for the things we need here at home – and fight to stop another bloody war.