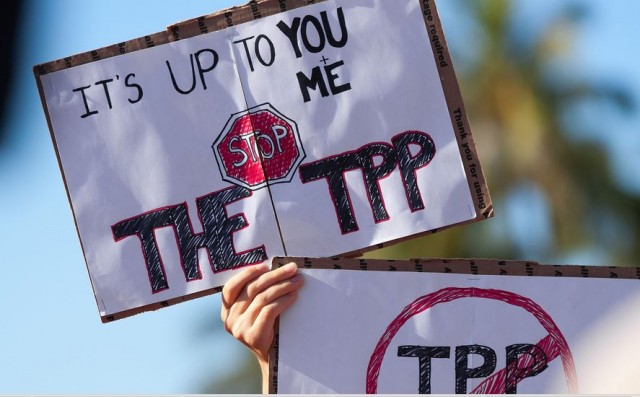 Tell Congress To Reject The TPP!

On November 18, we and our allies will deliver thousands of petitions to Congress calling on them to reject the TransPacific Partnership (TPP) as part of the #FallRising mobilization in Washington, DC. At least, that’s what we hope to do.

This is what it says:

We are writing to urge the Congress to reject the Trans-Pacific Partnership (TPP). This agreement will destroy jobs, degrade the environment, undermine the Internet and weaken US democracy and sovereignty.

And here is why this is important:

The TPP’s scope is too broad. It usurps the legislative authority of Congress by writing rules concerning safety and labeling of foods, access to healthcare and medicine, regulation of banks, rights or workers, future energy sources and so much more. Essentially, its scope is everything. These are issues that should be considered by Congress not written in secret by trade negotiators.  In our representative democracy these types of issues should be publicly debated, hearings should be held and people should express their views before a law is passed. In addition to undermining the legislative authority, the TPP weakens federal courts by expanding Trade Tribunals through investor state dispute settlement rules. The experience of the TPP indicates that Congress needs to reconsider how trade agreements are developed: trade should put the needs of people and protection of the planet before profits; and trade needs to be negotiated with transparency and participation of the people.

What’s Wrong with the TPP? This deal will lead to more job loss and downward pressures on the wages of most working Americans, Economic Policy Institute (http://www.epi.org/blog/whats-wrong-with-the-tpp-this-deal-will-lead-to-more-job-loss-and-downward-pressures-on-the-wages-of-most-working-americans)

Why People Oppose the TPP, TTIP and TiSA by the Alliance for Democracy (http://www.thealliancefordemocracy.org/pdf/2015AfDlocaltrade.pdf)