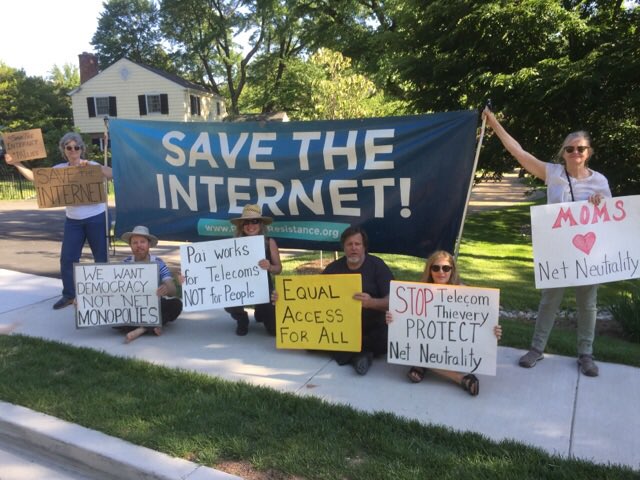 On May 18, Chairman of the Federal Communications Commission Ajit Pai formally introduced a proposal to end net neutrality. He plans to rush the process through this summer while people are on vacation and less likely to notice.

This is a critical time to take action.

We won the fight for net neutrality in 2015 in part because millions of people submitted comments to the FCC in favor of reclassifying the Internet as a common carrier under Title II of the Telecommunications Act. This means that neither the government nor the Internet Service Providers, such as Comcast, Verizon and AT&T, can control where people go on the Internet. Title II treats the Internet like a utility – for example, electric companies can only provide electricity to your home, they can’t tell you what you can and cannot plug in.

Here are step-by-step instructions to help you submit a comment to the FCC. Please take a few minutes to do that now and then share this with others.

1. Click here to go to the page for Express Filings of comments. This is the simplest format to use.

2. Type 17-108 into the top box called “Proceeding(s)”. Yes, in this Orweillian world Pai did title the proposal to end Internet freedom “Restoring Internet Freedom”. It should be called “Promoting Telecom Thievery”.

3. Fill out the rest of the form. Yes, you do have to provide your address in order to be counted.

4. Type your comment into the box at the bottom. See the advice below from Tech Crunch.

5. Review your submission and once you are satisfied, click on the”submit” button at the bottom of the screen.

What should you write?

All the comments will be looked at in one way or another, but substantial ones that address specific points in the proposal will almost certainly get a little more attention. Make your position clear, whatever it may be, and use the paragraph numbers in the NPRM to call out specific points. You can download it in a couple of formats here — it’s long, but scan through it and you’ll definitely find something worth commenting on.

Take your time to craft a substantial comment addressing a specific issue you can speak to personally, or that you’ve looked into enough to feel you have an informed opinion.

For example, say you wanted to weigh in on whether the ban on broadband providers throttling certain content is a good idea, or if you trust them to do so voluntarily. You could write:

Paragraph 82 asks for input on whether throttling should be regulated. In the past ISPs have throttled content based on their own determination of what was lawful or permissible, and had to be forced to stop in the courts. Isn’t it possible they could do this again? I’m also concerned by mobile providers who say a plan is “unlimited,” but when you exceed the data cap, only throttle sites and services that aren’t part of their approved zero-rating network. Thanks for reading my comment.

You can be more broad if you want, even if you’re not quite sure what things like Title II and Section 706 are:

I’m worried that the protections that are in place will be weakened if we change the way they’re enforced. I would support a new regulation style if it guarantees the same or better protections, but not if we lose any.

This kind of input is important, too. Let’s just try to avoid things like “You suck FCC! XD”

Unless you want to, you don’t have to have references or links or anything. This is about making your voice heard, not making a case in court. As long as you make your point clearly, your comment will be counted among those preferring one course over another.