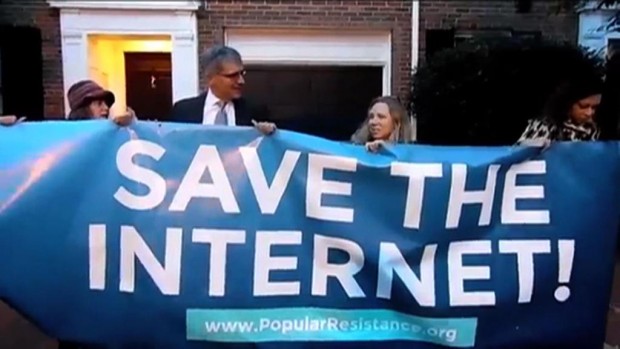 Tell The FCC Why You Support Net Neutrality

Above: FCC Chairman Tom Wheeler behind a Save the Internet sign outside his Georgetown home when Popular Resistance blocked his driveway on November 21, 2014. Photo by Elias Weston-Farber

NOTE: Thursday, Feb. 26 is the big day. The FCC will vote on reclassifying the Internet as a common carrier. We will hold a press conference outside the FCC on Thursday morning at 9:30 before the 10:30 am hearing and there will be a party that night at Lost Society (2001 14th St. NW WDC) at 6:30 pm.

And #DontBlockMyInternet actions start on Feb. 19. CLICK HERE to find one near you.

Take the pledge below so you will be kept up to date on actions:

The clock is ticking down fast to the Federal Communication Commission’s (FCC) crucial decision about whether to allow Big Telecom to install slow lanes on our Internet. We have just over a week left to make our voices heard before they vote on a plan to stop Internet slow lanes – setting a new global standard for countries around the world.

While FCC Chair Tom Wheeler appears to be moving in the right direction, new threats have emerged. Deep-pocketed cable lobbyists and their lackeys in Congress are running a deceptive, last-minute campaign to insert massive loopholes into the new rules. The next few days will be our last chance to make sure key leaders at the FCC hear our call.

But to push back, a broad coalition of groups have a bold plan to counter Big Telecom spin and make ourselves heard by decision-makers at the FCC: we’ll park a giant JUMBOTRON right outside their office in Washington, D.C. as part of #InternetCountdown. With the FCC poised to shut down other avenues of public input in the week leading up to their decision, our huge Jumbotron will be the best chance to send a message in these crucial last few days before the final decision on February 26.

Dozens of organizations working in the fight for net neutrality have never seen momentum like this before. We’re talking with organizations and businesses like Twitter, Tumblr, Namecheap, Cheezburger, Hootsuite, ServInt, the i2Coaliton, Free Press, SumOfUs, Center for Media Justice, Daily Kos, Fight for the Future, EDRi, Popular Resistance, The Nation, Women Action Media, ConsumerNZ and many others to make big waves. It feels like the whole Internet is coming together around this. But we need your support right now to make this a success – here’s how you can help:

1. Send us your messages at #InternetCountdown:

Today, we have launched a new tool at StopTheSlowDown.net to let you stream content directly to our Jumbotron. Your comments, photos, memes, and videos are all welcome – so start thinking about what you’d like FCC decision-makers to see most when they look out their office window! And when a great idea strikes, post it to social media and tag it with the hashtag #InternetCountdown and we’ll make sure we find it.

2. Have your organization join the campaign:

Are you part of an organization you’d like to see as part of this campaign? Please encourage them to join our growing coalition by submitting this online form.

Or, if you know an organization you’d like to see join, Tweet @ them with a link to this blog and then ask them to “Join the #InternetCountdown”. You can tag @TheOpenMedia as well and we’ll be sure to follow up.

3. Chip in to make our #InternetCountdown Jumbotron a reality:

Broadcasting your voices on a giant Jumbotron has the power to turn heads at the FCC, wake up the media, and change the debate, but we can’t afford it without your help. Can you pitch in to support this?

It looks like Wheeler is listening – but he’s under enormous pressure from deep-pocketed telecom giants threatening to sue, and we know Big Telecom’s lobbyists are swarming Washington D.C. before next week’s crucial decision.

With the FCC so close to doing the right thing, it’s never been more important for Internet users’ voices to be heard. We know Big Telecom will stop at nothing to get their way – so we’ve been working hard to amplify your voices at this crucial time.

This coming week will decide the future of the Internet. FCC chair Tom Wheeler seems to be on the verge of doing the right thing – but that would never have happened without you and millions of others speaking out.

We’re up against hugely powerful opponents – they’ll do everything they can to make their slow lane nightmare a reality. But we know if we all pull together at this crucial time we can stop them. Are you in?