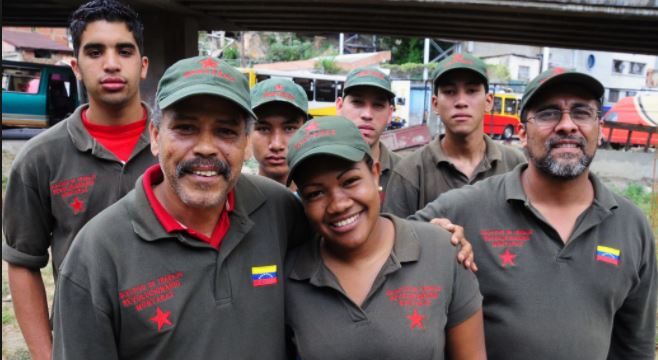 Ten Big Lies About Venezuela And Its Revolution

For many years I have had the absolute conviction that the only thing that the capitalist system has managed to surpass socialism in, over these last 100 years since the first consolidated socialist revolution in history took place, is in having developed a formidable propaganda apparatus. This propaganda machine has been used to manipulate the public opinion on a global scale, by accepting and even celebrating its supposed achievements, completely hiding its errors, failures and contradictions. And at the same time it has tried to do the opposite with all the socialist societies that have existed and still exist on the face of the planet.

An undeniable great achievement of the capitalist powers, based on the immodest use of this propaganda apparatus, has been that almost half of the human beings on this planet identify with their system, which is terribly unfair, oppressive, alienating, inequitable, predatory, cheating, xenophobic, misogynistic, etc., etc., etc., with freedom, justice, equality, democracy and in general with all the highest values of the human species. At the same time they have managed to attribute to the governments with a socialist ideology all their most aberrant anti-values, in the judgment of that same half of humanity.

As if this were a little thing, it is regrettable that under the influence of this propaganda there are a number of our comrades who still assume as true a great number of the fallacies widely disseminated by the capitalist communication apparatus. Like it was in the news about the erosive process commanded by those malicious traitors called Gorbachev and Yeltsin, which ended with the dissolution of the USSR in 1991. This was reported by the propaganda machine to have its origin in a supposed economic collapse initiated in its early 1980s, when precisely the opposite occurred. Actually the highest levels of production were recorded at the end of that decade. It was only at the fall of the USSR when it began to register a decline in production and a decline in the Russian economy, which fell by 45% between 1991 and 1998.  Those who still believe that Soviet Communism failed on its own should take into consideration in 1917,  Russia was one of Europe’s most backward countries and that between 1917 and 1991 the Soviet economy recorded continuous growth and that production in per capita terms and increased by 378% in that 74 year period.

Another lie of more or less the same caliber is the one that has been passed along about North Korea for more than a half century. After the United States had assassinated more than 2.5 million of their civilians and left another 5 million homeless, during the war giving rise to two Koreas, the lie has been that courageous North Korea has suffered permanent famine since then under its socialist leadership.

So far, in this century we have witnessed great deceptions widely disseminated by the Empire’s rogue world media to try to justify their fiercest invasions, each of which have been subsequently disproved, although only after immense damage has been caused. Such is the case of, the presence in Afghanistan of Osama Bin Laden, the alleged mastermind of the demolition of the twin towers of the WTC; the existence of weapons of mass destruction of all kinds in Iraq; and the aerial bombing of civilians in Libya by Gadhafi, all of them proven to be lies.

The Bolivarian Revolution of Venezuela has been widely vilified by the means of the right even before its rise to power in 1999; an example of this was when its top leader, Commander Hugo Chávez, was falsely accused by Ernesto Samper, then president of Colombia, to be behind the infamous Colombian guerrilla attack on the Venezuelan border naval post in 1995. This falsehood was disseminated by the media on the right without a shred of evidence but was not retracted even when Chavez went to the neighboring country to undermine such a lie. The dirty war labs that create the alter reality about Venezuela started to dramatically increase to the stratospheric levels it is at now when Chavez declared the anti imperialist character of the Bolivarian Revolution on May 16, 2004.

Here we present a list of 10 of the greatest lies lodged against Venezuela and its Revolution in the framework of the unconventional war that has been applied, each of them together with a brief argument that in our opinion should serve to counter the misinformation:

1. Venezuela is an unusual and extraordinary threat to the national security of the United States, as decreed by an executive order signed by Barack Obama on May 3, 2015, an absolutely fallacious statement that he himself dismissed 5 days later with the following words, “We do not believe that Venezuela is a threat to the United States and the United States is not a threat to Venezuela.” This pronouncement appeared in an exclusive interview with EFE, held before he travelled to Panama to participate in the VII Summit of the Americas. He repeated the retraction again in a plenary meeting before all the presidents and heads of Government of all the OAS member nations. In spite of this, Obama extended the validity of that order for a year and in 2016 and shortly before his presidential time was up, he renewed it in early January of this year.

2. The Venezuelan government is a dictatorship that violates human rights. Venezuela is a member of the UN Human Rights Council which approved earlier this year an outstanding grade for its second universal periodic review (UPR), four and a half years after having approved the first, far surpassing the United States which remains its most persistent detractor in this and many other subjects.

3. Venezuela is a narco-state; what happens in reality is that our neighborhood situation with Colombia, which is the world’s largest producer/exporter of cocaine, has unwittingly made us a country of transit of this drug to the United States the world’s largest consumer of it. The fallacious accusation remains despite the fact that the UN has repeatedly declared us “a country free of illicit crops”, most recently in August 2016.

4. Venezuela is isolated in the global context; something that is absolutely contradictory to the fact that Venezuela, which has recently become a temporary member of the UN Security Council, is occupying, until 2019, the pro-tempore presidency of the Non-Aligned Movement (NAM), involving more than 120 countries representing more than 55% of the world’s population. Venezuela has had many recent diplomatic victories in the UN Security Council, the UN General Assembly and the Organization of American States (OAS) over the Empire and its allies during this year with support of many nations and a multitude of grassroots solidarity organizations on the world level.

5. Venezuela suffers a humanitarian crisis in the health sector is a fabrication promoted by the Department of State and the Southern Command to lay the justification of a military invasion. We will not deny that we are suffering from a major shortage of medicines and medical supplies of foreign origin whose importation must be controlled by the Revolutionary Government but this process is being boycotted on the orders of the Empire, like in a recent case where the Government of Colombia, forbade the sale of medicines against malaria to Venezuela and another case by the financial firm Euroclear, which for 6 weeks has been blocking $450 million earmarked primarily for the purchase of drugs and food abroad. Despite the terrible economic war that the Empire and its allies have been applying on us for years, we remain one of the few countries in the world that has totally free medical care for the people.

6. The economic measures of the revolutionary government have generated an acute food crisis, but the truth is that during the years of the revolution, production has increased to 85% of all the food we consume. What happens is that this production is controlled by two large corporations of transnational capital monopolies that decide what they place and what they keep out of the market that leads to generating scarcity. It also occurs that a large amount of the food we produce or import is expended at very low prices because it is subsidized by the Government for the benefit of the people, but much of it is being illegally diverted to neighboring countries, as is the case of Colombia where at times food prices have risen 40% due to the smuggling promoted by the forces of the narco-militarism in complicity with the Colombian government.

7. Venezuela is part of the “Axis of Evil”, together with Russia, China and Iran, when in reality Venezuela, in complete control of its sovereignty, is a firm believer in the need to contribute to create a multipolar world. It maintains excellent relations of a diplomatic nature, commercial, cultural and military cooperation with these countries. Let’s not forget that since 2007 an official memorandum of the United States National Security Agency (NSA) included Venezuela among its six “priority targets”, along with China, Russia, North Korea, Iran and Iraq.

8. Venezuela is in default, is only true in the self-fulfilling prophecy of financial risk rating companies, which have long been suggesting in establishing indicators higher for Venezuela than for those with similar economies and even smaller countries like Jamaica and Panama who are not oil exporters nor do they have other strategic resources. This despite our country being in absolute peace and able to certify the largest reserves of hydrocarbons on the planet that enjoyed world oil prices of more than 100 dollars per barrel. What has really happened is that Venezuela, which during President Maduro’s government has paid a little more than $70 billion for financial debt, is experiencing serious difficulties in honoring the payments in dollars due to U.S. sanctions that prevent the repatriation of CITGO’s dividends in that currency causing Venezuela to have to refinance creditor debt. Likewise, the company Euroclear in addition to improperly withholding our funds in dollars keeps illegally blocking securities (bonds) issued by the Republic for an amount of $1.2 billion, which is why PDVSA has requested a grace period of 30 days to be able to pay the vouchers of the bonds with maturity in the months of November and December of this year.

9. The Venezuelan revolutionary government refuses to call elections; a huge lie that produces deep hilarity when one takes into consideration that the governments of Chávez and Maduro have held a world record for having had 23 elections, in the 20 years of Revolution. It should be noted that during that period there was only one postponement of a regional election that was requested by the opposition, which was a referendum to revoke the presidential mandate that was not possible because it did not meet the law requirements. Such a huge fallacy has its origin in the fact that the Empire and its allies intend to force us to hold an early presidential election, which by law must be carried out in December of the year 2018.

10. The Venezuelan opposition is the majority and is democratic; which are two unsustainable lies. First it is irrefutable fact that the opposition has lost 20 of the 22 electoral processes carried out until now and have been defeated in the most recent regional process in which the forces of the revolution obtained 18 out of the 23 disputed state governorates. In terms of proving that this is a deeply anti-democratic opposition, it would suffice to say that it has participated in the following; A successful coup d’état (April 2002); An oil sabotage stoppage (December 2002 — February 2003); Countless failed attempts at coup d’états; three bloody days of terrorism resulting in countless fatalities in May 2003, from February to May 2014, and from April to July 2017. This opposition has only recognized the legitimacy of the two elections; the two in which they won.