Ten days in Palestine is all one needs in order to experience the collapse of the prevailing political thinking regarding Palestine.

Jerusalem, Palestine – In his speech at the party conference, U.K. Labour leader Jeremy Corbyn said “Let’s give real support to end the oppression of the Palestinian people,” a statement no other Western politician would dare to make. However, the latter part of Corbyn’s statement suggests that Britain must “move to a genuine two-state solution of the Israel-Palestine conflict.” While Corbyn’s record shows clearly that he cares about the plight of the Palestinian people and wishes to end their oppression, the two parts of this statement stand in contradiction to one another.

Being on the tail end of a ten-day trip to Palestine, and accompanying a few friends from the U.K., it is clear to me that ten days in Palestine is all one needs in order to experience the collapse of the prevailing political thinking regarding Palestine. All one needs is a commitment to travel throughout the country and to listen to people who actively oppose the oppression of the Palestinians and are prepared to expose it.

A visit to Palestine needs to begin with a simple lesson in geography, followed by another short lesson in history. Palestine stretches from Al-Jalil in the north to the Naqab desert in the south and from the Jordan River in the east to the Mediterranean Sea in the west. During a period of 12 months between the end of 1947 and the end of 1948, the country was plagued by a brutal campaign of ethnic cleansing during which close to 600 towns and villages were destroyed and their population — close to one million people — forced into exile. For a detailed explanation of each destroyed town or village, an authorized guide from Zochrot — an organization dedicated to keeping the memory of the Palestinian Naqba, or catastrophe, alive — can accompany anyone to see the remains and hear the stories of these communities that are scattered throughout the country.

Driving throughout the country one will see Israeli towns side by side, or across the road from one another and, without even entering these towns, anyone paying attention will see enormous differences between them.

Palestinian representation in the Knesset

Dr. Ahmad Tibi is one of the better-known members of the Israeli Knesset, or house of representatives. According to him — and to Adalah, the Legal Center for Arab Minority Rights in Israel — Israel has close to 55 laws that either specifically or indirectly discriminate against the Palestinian citizens of the state. The law that codified all of the laws passed up to this point into quasi-constitutional authority is the Nation State law.

There are 12 members of the Knesset who are Palestinian citizens of the state and who run in a list simply called “The Joint List.” However, even though they make up the third largest block in the Knesset, they have no voice and no say on any of the major issues pertaining to the policies of Israel, even when it comes to the policies that touch on their own constituents.

The political structure is such that no vote and no coalition will ever rely on the support or opposition of this block because they are seen by many in Israel as a third column that must not be trusted; so, even though this community does vote, their vote gives them little say.

“I must apologize that I cannot welcome you with the traditional Bedouin hospitality, but our village was destroyed, and we no longer have our reception tent.” This is how we were welcomed by Aziz, Sheikh Sayyah’s son. Sheikh Sayyah Al-Turi, who joined us later, is the leader of the village of Al-Araqib. We visited the remains of this old village and Sheikh Sayyah came to sit with us in a makeshift tent. He was waiting to hear if an appeal submitted on his behalf to the Israeli high court would be accepted.

In December 2017 an Israel court sentenced Sheikh Sayyah to 10-months imprisonment and a fine of 36,000 shekels ($9,944) and permanently banned him from entering his own village. All of this because of his central role in the village’s struggle against the state’s decision to destroy the village and remove its people. To date, Israeli authorities have carried out demolitions in the village 135 times. 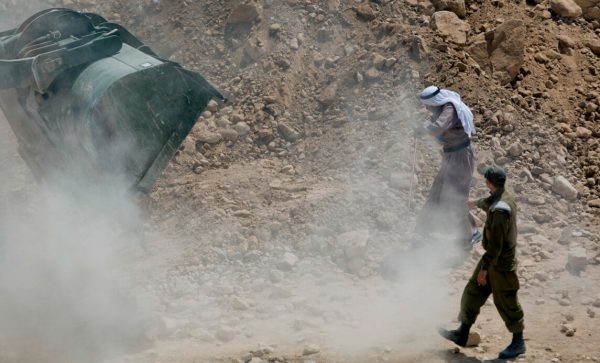 Aziz, Sheikh Sayyah’s son, shows us maps, aerial photos and copies of documents that prove the village ownership of its lands. However, Aziz says the only way the state will accept their ownership is if they sell their land: “If I call the state authorities now and offer to sell my land they will drop everything and come to buy.” But if he refuses to sell, the state claims the land is not his and the villagers are trespassing on state-owned land. That is the paradox of Palestinian land ownership in Zionist-occupied Palestine.

Furthermore, the state has been planting trees that are not indigenous to the land in an attempt to dominate the people and deprive them of their land. In Al-Araqib, they created the Ambassadors Forest. According to Aziz, ambassadors were invited to the official inauguration of the forest and all but the Ambassador of South Africa showed up. The South African ambassador refused to participate and asked that the trees planted there in his name be taken out.

Israel has all but integrated the area that used to called the West Bank. It is now called Judea and Samaria. The Judea and Samaria police website tells us that this region has cities and towns and that the population is diverse and includes people living in both rural and urban areas. It also informs us that there are pockets with a “problematic hostile population.”

In Hebron, for example, some 800 Israeli settlers still make life for the 200,000 Palestinians unlivable and the Old City is all but inaccessible to local Palestinians. Bethlehem is surrounded by a wall and Israeli settlements are continually being built around it and practically cut it and its surrounding villages off from the rest of Palestine. In Nabi Saleh and other villages, the Israeli army continues its raids and mass arrests of the youth. Jerusalem’s indigenous Palestinian residents get few services and they are squeezed between a wall, settlements and a municipality that does not want them within its boundaries and speaks of “Judaizing” the city. 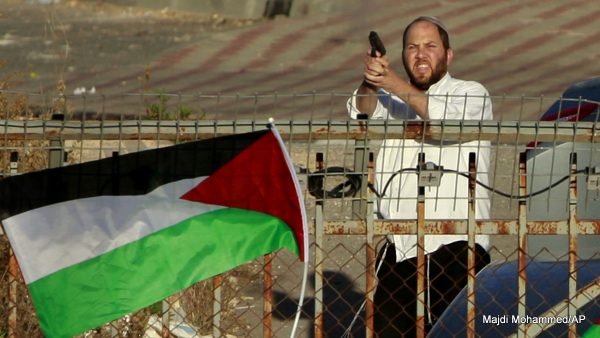 A Jewish settler shoots in the air as Palestinians protest near the Israeli settlement of Bet El in the Palestinian West Bank.

The entire country is either Palestine or Israel, but it cannot be both. The Two State Solution is a Zionist attempt to quash Palestinian resistance and pretend that Israel wants peace. Talk of the Two State Solution only delays the real solution: either accept that Palestine is now called Israel and exists under an apartheid regime, or recognize that Palestine must be free and that all who live within its boundaries have the right to be free.

Top Photo | Kids walk through the rubble of the house of Baraa Ibrahim Sale after it was demolished by Israeli troops in the West Bank village of Deir Abu Mashal, near Ramallah, Aug. 10, 2017. Nasser Shiyoukhi | AP