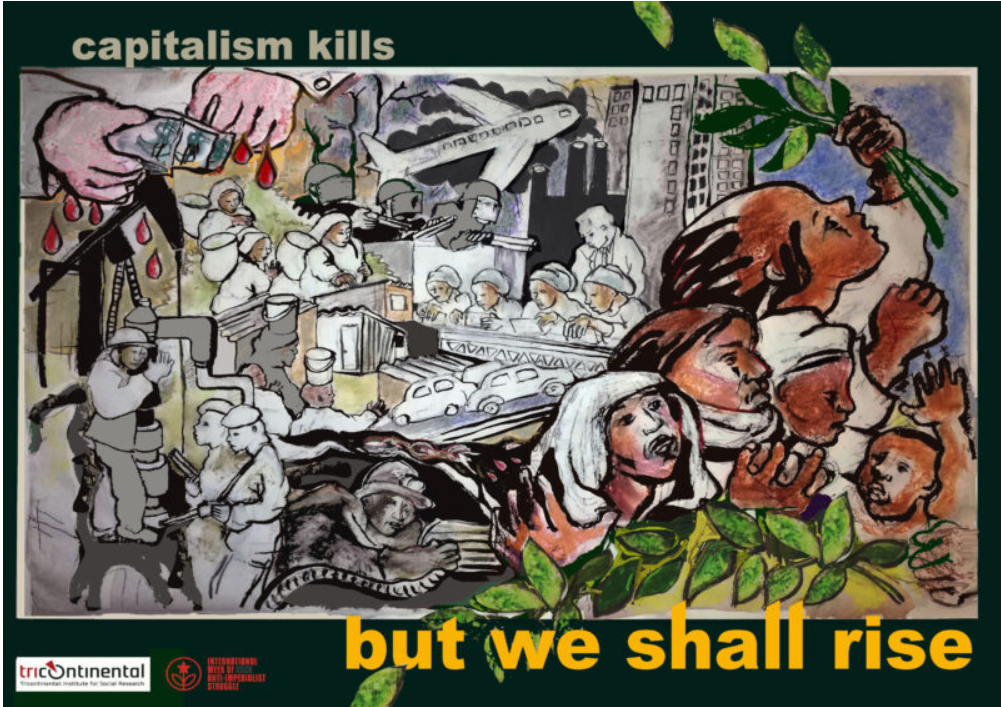 Above photo: Capitalism Kills but we shall rise. By Judy Ann Seidman (South Africa), Capitalism, 2020.

In 1974, the United Nations General Assembly passed a New International Economic Order (NIEO), which was driven by the Non-Aligned Movement (NAM). The resolution laid out a clear plan for the structural transformation of the world system, which was in the throes of a crisis at the time. But, the NIEO was set aside and the world order was shaped in a neoliberal direction; this neoliberal orientation furthered the crisis and brought us to this current cul-de-sac of human possibilities.

Our team at Tricontinental: Institute for Social Research developed a ten-point agenda for a post-COVID-19 world. Last week, I presented this agenda at the High-Level Conference on the Post-Pandemic Economy, organized by the Bolivarian Alliance for the Peoples of Our America (ALBA). The rest of this newsletter is taken up with the agenda, which we hope will be adopted by the Non-Aligned Movement (NAM) who might take it forward for discussion to the UN General Assembly. We are certainly in need of a New International Economic Order.

Our priority is to tackle the global pandemic. To this end, enhancing and pivoting public sector production towards masks, protective equipment, ventilators, field hospitals, and tests for the entire population must be central – as it is already in places such as Vietnam and in Venezuela. It is essential to establish worker control over working conditions so that workers – who are best placed to make these decisions – can be guaranteed a hygienic work environment. In the absence of adequate public action, governments need to create work plans to hire people for projects to break the chain of infection and to ensure that people are fed, clothed, and in good health; such public action can learn from the cooperatives in Kerala (India) and the Committees for the Defence of the Revolution in Cuba. The workforce in shuttered sectors – such as tourism – should be immediately hired into jobs that are geared towards countering the pandemic.

A united front of the Global South must reject the IMF and creditor-driven limit placed on government sector salaries; because of these limits, former colonized countries have been losing medical personnel to the North Atlantic states. States must use their precious resources to enhance public medical education and train medical workers within communities to provide public health services. ALBA’s medical internationalism, with the Cuban brigades in the lead, must become a model for the world through the World Health Organisation (WHO). Chinese medical internationalism would play a key role here as the US departs from the WHO. The entire private health sector must be nationalized, and smaller medical centers need to be created so that people can easily access public health facilities. Governments must withdraw from public insurance for private health care; in other words, no more public subsidies for private health care. Public health systems must be strengthened, including the production of medical equipment and medicines and the distribution of essential medicines (whose prices must be controlled by regulations).

The Global South must push for the annulment of the TRIPS Agreement (Trade-Related Aspects of Intellectual Property Rights), which provides unrestrained property rights on goods that must be part of the global commons. This applies directly to the COVID-19 vaccine, which must be offered for production in countries without consideration of profits or intellectual property rights. But it applies equally to any pharmaceutical drugs, many of them publicly financed – the profits for which are then privately appropriated – and to energy technologies that would swiftly move us from fossil to renewable fuels as well as to more efficient communications technologies (such as 5G). In the short term, the states of the Global South must enhance mechanisms for science and technology transfer amongst themselves.

Reasonable estimates suggest that the ‘developing countries’ owe $11 trillion in external debt, with debt service for this year alone estimated to be $3.9 trillion. With the coronavirus recession, such payments are unthinkable. Debt relief must go beyond the forty-seven ‘least developed countries’ and include all of the states in the Global South; this relief must not only postpone debt, but it must cancel debt (from both public and private creditors). An international alliance must be formed on a broad front to pressure creditors to cancel the debt so that all resources that go to service the debt can be channeled fully towards the dire needs of society.

Half of the world’s population struggles with hunger. Food sovereignty and food solidarity are essential antidotes, as has been shown by platforms such as Via Campesina. Corporate control over agriculture must be challenged and food production must be made into a human rights priority. Funds need to be marshaled towards enhancing the production of food; these funds need to be spent on infrastructure for agrarian production (including to enhance such projects as the ALBA Seed Bank). Universal public distribution systems must be strengthened to provide higher incomes for farmers and to ensure the distribution of food to the people. A more robust rural landscape will decongest cities and draw people to live meaningful lives in rural areas.

6. Enhance and invest in the public sector.

The CoronaShock has shown that the private sector is simply not capable of addressing emergencies, let alone human needs. States of the Global South must lead by offering a robust defense of the public sector, not only for the production of key goods and services (medicine and food), but for anything that is essential for modern life – more public housing, more public transportation, more public Wi-Fi, and more public education. Allowing the profit sector to commodify these parts of human life has eroded our capacity to build a civilized society.

Currently, roughly $32 trillion is sitting in offshore tax havens, and untold amounts of money are simply not counted towards taxation. Two things are necessary: first, that illicit financial flows be recovered, and second, that wealth taxes be properly imposed on the upper echelons of the bourgeoisie and the wealthy land-owning elite, as well as financiers and those engaged in financial speculation. These funds would be enough to redirect priorities to eliminate poverty, hunger, illiteracy, homelessness, and indignity on a global level.

Without capital controls, a country has no effective economic sovereignty. States of the Global South must create an international platform that binds each of them to undertake capital controls; this is a political issue that cannot be implemented by a single country. Capital controls are measures taken by a government to regulate the flow of finances into and out of a country. Such controls include transaction taxes, minimum stay requirements, and caps on the amount of currency that can move across borders. Capital controls and democratic control over the Central Bank will prevent capital flight and should give governments sovereignty over their currency and their economy.

Dollarization is an essential part of a new agenda. Sixty percent of the world’s reserves are held in dollars, and world commerce is largely conducted in dollars. The Dollar-Wall Street Complex has a near stranglehold on international finance and trade; it is no surprise that US unilateral sanctions are having a catastrophic impact on countries not necessarily because they rely upon the dollar, but because their trading partners are enmeshed in it. The dollar has become a weapon to undermine development. Experimental alternative payment systems like the Sucre need to be dusted off, and new global financial institutions need to be created to facilitate wire transfers. In the short run, this could begin with non-dollar-based regional facilities, although there is a need for global institutions to set aside the immense advantage provided to the United States by the dollar being used as a global currency. Relatedly, there is a need to strengthen regional trade blocs that would honor barter as a mechanism for payment.

The pandemic has shown us the power of central planning and the importance of decentralized public action. Economies that are not allowed to plan their use of resources have floundered before the virus. There is a need to establish participatory central planning mechanisms on an ever-increasing scale and to recast social production towards need – not towards profit. These plans must be derived from maximum democratic input and must be transparent to the public. Central planning would enable the nationalization of sectors such as mining (including energy production), the large-scale production and processing of food, and tourism; these would be placed under worker control into cooperatives. It would be an instrument to minimize waste, including profligate military expenditures. The enhancement of local self-government and cooperative production, as well as of associations and unions of the people, will allow social life to become increasingly democratic.