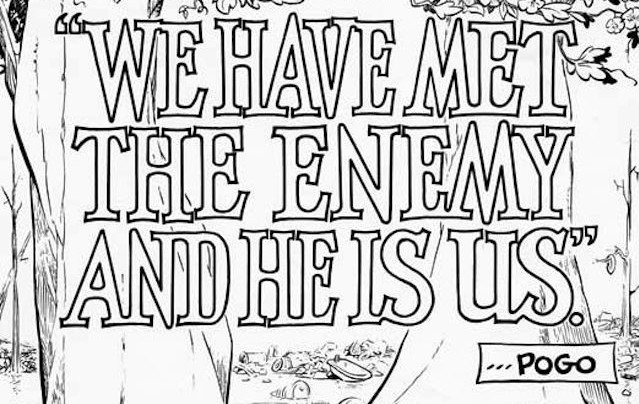 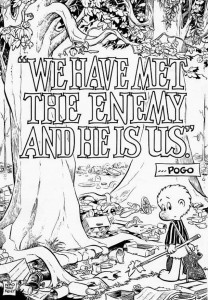 Readers of a certain age will remember Pogo, the political satire strip that was probably the Doonesbury of the sixties. Walt Kelly did this great poster for the first Earth Day and really, nothing has changed.

So many email pitches for green products, infographics and listicles (articles made of lists) come to me at TreeHugger. It is astounding, how many of them there are, and how trivial they can be. One that got me particularly cranked suggested that we could make a big difference in the state of the world by turning our TV brightness settings down and making the video game console go to sleep. A few years back, one of my sustainable design students asked what she could do to go green that did not involve buying replacement windows, electric cars or bamboo socks; Here is an Earth Day roundup of them, an update of an earlier version, listing the things that anyone can do.

Where you choose to live is the single most important determinant of how much energy you use. But it doesn’t have to be in Manhattan in a forty story building; there are neighborhoods and communities across North America that can support a walkable lifestyle, because that is what everyone did when most of our cities and towns were designed. Study after study shows that everything else is almost incidental. And has less to do with density than it does with urbanity, which I called “a mix of transit-oriented development, walkability, and historicity.”

You don’t have to go all Franke and get rid of your car, they are fun on weekends. But don’t use it for everything. The benefits of cycling instead of driving are so obvious that it is a whole other list. But it also goes hand in hand with Tip #1; it is hard to do one without the other.

3. Get in the comfort zone

This guy happily smoking his pipe in his midcentury modern chair, in this 1963 drawing by Olgyay, is in that kidney shaped zone I call the “comfort kidney”, that mix of temperature, humidity and breeze where we are comfortable. Yet all of our thermostats and humidistats and furnaces and air conditioners are designed to move the temperature and humidity to a single point, and require machinery running all the time to add heat or take it away. It is one reason I do not get so excited about the Nest thermostat; temperature is only one factor that affects how comfortable we are.

But we can be comfortable at higher temperatures if the air is dryer, or if it is moving. we don’t have to pay for energy to keep that temperature the same, if we can keep in the kidney by opening windows for a bit of breeze.

Elvis got it. Jimmy got it. Kris De Decker of Low Tech Magazine got it when he wrote:

The energy savings potential of clothing is so large that it cannot be ignored – though in fact this is exactly what is happening now. This does not mean that home insulation and efficient heating systems should not be encouraged. All three paths should be pursued, but improving clothing insulation is obviously the cheapest, easiest and fastest way.

But it also works in summer, in hot climates. you can turn the thermostat way up if you wear loose, light natural clothing and if there is a little bit of breeze. The most important way to reduce energy consumed for heating and cooling is to dress appropriately.

It is all about living with less stuff, getting rid of what you don’t need and not replacing it. Years ago I wrote in Planet Green:

Mies van der Rohe said “less is more” (although Robert Browning said it first) to define the simplicity of his designs; we have adopted it as well to reflect a way of living where one consumes less stuff and needs less space to house it. In the ’60s the term “minimalism” came into vogue, describing first a style of art, and then design. In architect-speak, minimalism is “based on a process of reduction of architecture down to its essential concepts of space, light and form”.

Minimalism can go back even further to William Morris:

Have nothing in your house that you do not know to be useful, or believe to be beautiful.

6. Throw out your TV

How many platforms do you need? We threw out our TV a couple of years ago and save a fortune on cable, and have not missed it at all. Occasionally when there is something that we really want to watch, we turn it into a social event and visit friends. (usually just Academy Awards) For everything else, we use the computer. It takes up a lot less space. 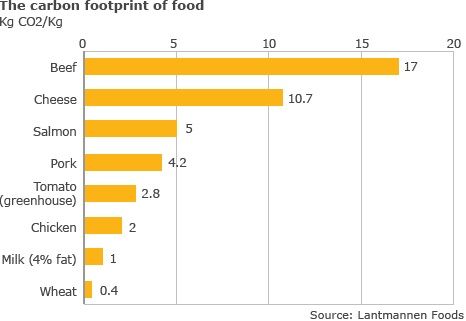 The program has been great, weekday veg. My footprint’s smaller I’m lessening pollution. I feel better about the animals. I’m even saving money. Best of all, I’m healthier, I know that I’m going to live longer, and I’ve even lost a little weight.

I am no longer so sure that it is the best, or only approach. Chicken has half the footprint of salmon, less than a greenhouse tomato. You really have to look at the full footprint of everything, the difference in seasons, the sustainability of the farming and harvesting practices, the chemicals involved.

Certainly all the data show that conventionally raised red meat is a huge environmental issue. After that, it’s complicated.

Before all the local food skeptics jump down my throat, note the emphasis on seasonal.Otherwise you are essentially eating fossil fuels. It is part of a bigger picture that I previously wrote about:

It isn’t just about growing our food locally and buying it at the farmers market. To really change our food system so that we are not eating fossil fuels we have to look at the way our cities are designed, how our waste system works, how the distribution system is set up, and what we do in the developing world that has become our out-of-season supplier.

But making the decision to buy local and seasonal is a start.

If you are going to eat a local and seasonal diet, you will have a lot more variety if you plan ahead. The canning season has started for many Americans already with ramps and asparagus; They are moving north and MNN’s Kelly Rossiter is getting ready. (the picture shows last year’s haul). She writes: ” there is something intoxicating about opening a jar of peach jam during a snow storm in February and having the aroma and taste of it transport you of summer.”