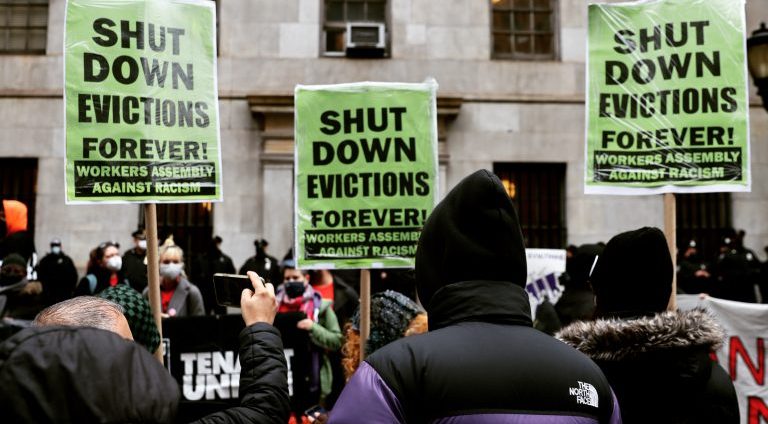 New York City – Eviction proceedings resumed Monday at the NYC Housing Courts. Tens of thousands of New Yorkers have been unable to cover rent due to the pandemic and the economic crisis it has caused. Members of a variety of tenants’ organizations — including Crown Heights Tenant Union, Brooklyn Eviction Defense, Cosecha, DSA Housing Working Group, Met Council on Housing and and the PSL — rallied at Brooklyn Housing Court calling for cancellation of the rents.

Although the demonstrators tried to enter both Brooklyn Housing Court and Brooklyn Borough Hall, they were barred from doing so by a phalanx of police officers.

“Direct action is the only thing we’ve seen that does anything. Getting arrested, making a scene, is apparently the only thing that moves our legislators so in terms of the moratorium, it was absolutely essential. Unfortunately, in terms of providing any sort of relief, the state legislature hasn’t done anything for us,” said Esteban Giron, an organizer with Crown Heights Tenant Union who left a copy of legislation that would cancel rent on the door of Brooklyn Borough Hall.

They decried the proposed legislation of Brian Kavanagh, the chair of the Senate Housing Committee, who has devised a bill that would distribute the $1.3 billion in federal funding doled out to the State for rent relief. It would work very much like the rent relief program that was rolled out over the summer. Only 40% of $100,000,000 allotted for this program was distributed to tenants. Sixteen percent of tenants who applied for relief were accepted, some of whom received $100 or $200 checks.

While housing activists accuse Kavanagh’s bill of being a bill for the landlords, housing activists widely support a bill co-sponsored by State Senator Julia Salazar and Assemblywoman Yuh Line Niou that would cancel rent and end mortgage payments.

A note to our readers: Although the housing court has reopened, tenants can file hardship forms through May 1st and likely won’t have to pay rent until then. You can access the form here.