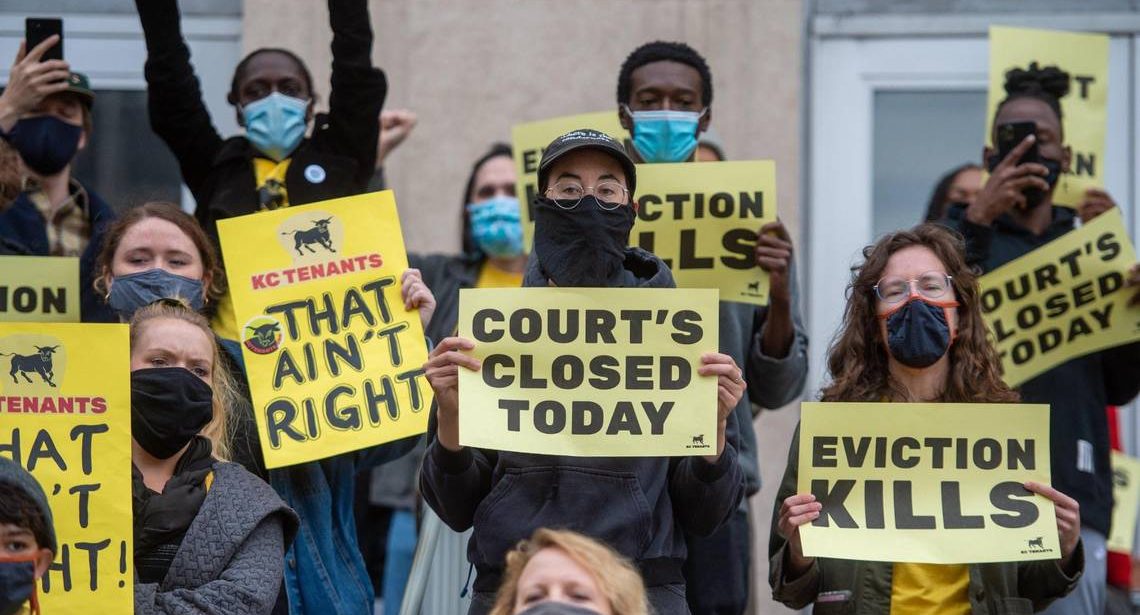 Tenants Blockade Courthouse, Shut Down Much Of Eviction Docket

Above photo: Protesters with KC Tenants came armed with signs outside the Jackson County Courthouse in downtown Kansas City on Thursday. Shelly Yang.

Kansas City tenants chained themselves to the doors of the Jackson County Courthouse downtown Thursday morning and shut down virtual eviction proceedings with online disruptions.

Tenants and community members have chained doors of eviction courts shut in Kansas City in order to prevent eviction hearings from beginning. The secret is that there is no secret: shut the system down, build to fight, fight to build. Follow @KCTenants pic.twitter.com/mmOS0s8mK0

The protest, organized by KC Tenants, drew about 100 people, who held signs saying “eviction kills” and “court’s closed today.” They called on Jackson County Circuit Court Presiding Judge David Byrn to halt the hearings. For months, KC Tenants has been pushing Byrn to reestablish an eviction moratorium to keep residents in their homes during the coronavirus pandemic and associated economic crisis.

Ashley Johnson of Kansas City was due in court Thursday for her second eviction case this fall, but she refused to go in.

Johnson won a previous eviction trial in September after her landlord took the appliances out of her home near 39th Street and Cleveland Avenue and refused to provide utility service. According to the court judgment, the landlord admitted at trial that she did not own the home and was no longer the legal landlord.

Now, Johnson, who lost work earlier this year because of COVID-19, is facing eviction again at that same home, though she’s now staying at an Airbnb. She and others risked arrest to attend the protest Thursday.

Johnson said it was her daughter’s first birthday, and she should be celebrating.

For now, Johnson is receiving help for her Airbnb from an aid fund KC Tenants created. She said it was important to use her voice to help others. The volume of evictions scheduled for Thursday, she said, was “overwhelming.”

Inside the courthouse, judges attempted to hold eviction hearings, but protesters called in to disrupt and shut down proceedings being handled virtually. They read from a script, oftentimes speaking over one another.

“Tenants on the line, this is not your fault,” a voice said. “You deserve a decent home. You deserve shelter during a pandemic. You are not alone. KC Tenants has your back.”

The protesters told each judge, “You’re complicit with every eviction you hear.”

This is what it sounds like when we shut down the teleconference hearings. We have a bunch of these recordings. Who wants to put a beat on this? 🔥 pic.twitter.com/ICZ7ZgchOc

Judge Jessica Agnelly postponed cases for a later date, saying that if disruptions continue, she would have to do the hearings in person. She ended the conference call.

Judge Mary Weir told the protesters online that the people had a right to have their cases heard. Despite disruptions, Weir set one case for trial in early December. She tried to move on with her docket, but the disruptions continued.

“Judge, we can’t hear you,” one person said. Others complained that they couldn’t hear if their names were being called.

Eventually, Weir said that because of the disruptions, no one would be allowed to appear via teleconference and that they will have to appear in person. Notices would be mailed. She too ended the conference call.

In a statement, the Jackson County Circuit Court said the judicial branch “does not create laws, statutes or policy,” but rather enforces and follows laws set by executive and legislative branches. It says it is and will remain in compliance with the CDC order that KC Tenants and the ACLU argue it is defying.

Access to the court was still available via the north entrance during the protest, but the circuit court said the protest blocked the western entrance, which is accessible under the Americans with Disabilities Act. It also noted the online disruptions.

“Notwithstanding these actions which were ultimately unsuccessful, court dockets proceeded and the rights of the litigants were protected,” the statement said.

Despite the court’s claim that the disruption was unsuccessful, several cases set for hearings on Thursday were postponed — and Missouri’s court case tracker said specifically that they were delayed “due to disruption by protesters.”

Asked for clarification, the court’s public information officer, Valerie Hartman, said in an email that most of the hearings were initial or routine hearings, not trials and that judges still held them.

“Continuances are often granted for a variety of reasons unrelated to attempts to disrupt the proceedings,” she said.

Since June, there have been about 1,700 eviction cases filed — about 500 in September alone when the CDC moratorium took effect, according to court data. KC Tenants founder Tara Raghuveer said closer to 600 had been filed from early September to mid-October.

When the COVID-19 crisis began this spring, the Jackson County Circuit Court temporarily halted evictions, but those resumed this summer. For months, tenant advocates have been calling for another moratorium amid high unemployment rates brought on by the pandemic.

Raghuveer said evicting people during a health crisis was like sentencing them to death.

“We know that there are tenants who have already been forced out of their homes and onto the streets who have gotten sick or will get sick from the coronavirus as cases continue to spike, and the CDC nationally has said that ending evictions is a matter of public health urgency,” she said.

Landlords and housing organizations have pushed back against the calls for a moratorium.

Stacey Johnson-Cosby, president of the KC Regional Housing Alliance, said the emphasis should be on providing rental assistance to keep tenants in their homes — not barring evictions if a tenant is behind on rent.

“Eviction moratoriums damage the very people they’re intended to help,” Johnson-Cosby said, adding that if people can’t pay $600 in rent now, they likely couldn’t catch up on potentially thousands in back rent when the moratorium ends.

“If they think that it is important to keep people in their homes, then they need to provide direct rental assistance to do so,” Johnson-Cosby said. “As it stands now, the government is basically telling me that my products must be free.”

“The housing providers I know are more than happy to work with a tenant who has applied for and is receiving rental assistance,” he said.

Protesters remained at the courthouse for well over an hour, but the Jackson County Sheriff’s Department detained two demonstrators in a nearby parking garage afterward.

The captain on the scene refused to answer questions and directed inquiries to the department’s public information officer, Deputy LaVanden Darks.

Fellow protesters chanted “let them go” outside the courthouse doors while the two were detained.

After being released, Wilson Vance said the deputies would not say why she and the other protester were being held.

“Then we gave them our IDs, and one of them came out and they were like, ‘You’re right. You don’t need to be here. You are being unlawfully detained,’ and they let us go,” Vance said.

Darks did not return a request for comment on Thursday. But in an email Friday morning he said the two were detained so that sheriff’s deputies could identify protesters who chained themselves to the doors. Vance was not one of them.

“The prosecutor will be determining if charges are appropriate,” Darks said.

The Star’s Glenn E. Rice contributed to this report.