Despite mounting challenges from a state keen on welcoming white supremacists, antifascist activists are learning that deep organizing is the way they win.

A wooden bridge guarded by two well-armed park rangers was all that separated us from more than 60 of the most infamous national and international white supremacists. It was the last weekend of June, and they had come to Montgomery Bell State Park in Burns, Tennessee for the National Solutions Conference, a gathering of “race realism” organizations from around the world.

As the afternoon sun beat down on us — some 50 or so antifascists — we sang and chanted in protest to the hate-filled gathering across the lake.

Knoxville attorney and antifascist Chris Irwin texted me from inside the conference, having somehow registered and paid for entry without detection.

“I can hear ‘La Bamba,’” he wrote. “They can hear you. They’re begging their people not to engage. They know they’ll lose if they do.”

If there is a theme song for antifascists in Tennessee, it is the beloved Mexican folk song “La Bamba.” We received some attention for it a couple years ago — when we drowned out and ultimately shut down a white supremacist rally — and since then we haven’t missed a chance to play our favorite song for them.

As I read Irwin’s message over the microphone to the crowd that had marched to the water’s edge — the closest we were permitted to get — cheers erupted and the music got louder.

Over the next few hours we continued to heckle and taunt them from across the lake. At one point, we got on a boat to get closer to their side, unfurling a banner with the words “White Supremacy Kills.” Although they never engaged us, we knew — thanks to Irwin — that our presence had made an impact.

“None of the Nazis could escape it,” he texted me later.

This was important to find out because — over the eight years we’ve been protesting these gatherings in the park — our ability to mount any kind of opposition has been severely weakened by a state government that’s all too keen on welcoming and defending white supremacists.

Not only was a resolution denouncing white supremacy killed by legislators in 2018, but Gov. Bill Lee recently signed a proclamation declaring July 13 a day of celebration for slave trader and war criminal Nathan Bedford Forrest. To make matters worse, antifascists in Tennessee are routinely met with militarized police and barricades, whenever we show up to protest a white supremacist gathering. 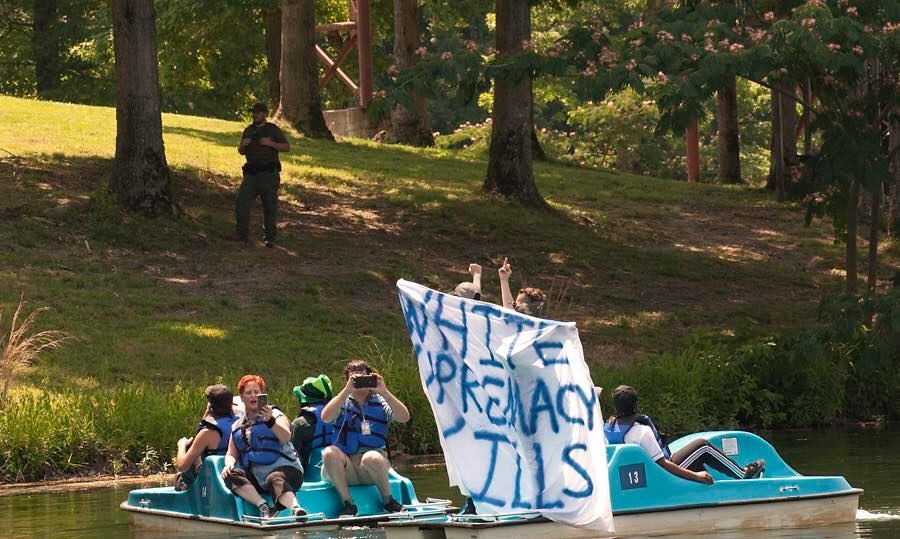 Protesters on boats unfurling a banner with the words “White Supremacy Kills.” (WNV/Alvine)

It should not be surprising then that — according to the Anti-Defamation League — one in every five white supremacist gatherings in the United States takes place in Tennessee. It’s become a safe place for them to spread their ideologies.

Despite these challenges, we continue to do our best to disrupt white supremacist gatherings. If we don’t, they look stronger — making it more likely that those on the fringes (usually young, white men) will be attracted to join their ranks. What’s more, those among us who are white (myself included) feel a particular responsibility to speak out. Plus, it is just safer for us to do so.

Nevertheless, disruption is only part of our goal. We also think it is urgent to find out who attends these gatherings and what they are organizing. After all, it was at a 2017 conference in Montgomery Bell that Richard Spencer announced the deadly “Unite the Right” rally, which took place weeks later in Charlottesville, Virginia.

In short, having Irwin on the inside was about more than finding out how much our protest got to them — it was about getting hours of video depicting the inner workings of the National Solutions Conference, its most virulent followers and leaders like former Ku Klux Klan grand wizard David Duke.

White supremacists started coming to Montgomery Bell State Park in 2012. They wanted to hold their gatherings somewhere far away from big cities like Washington, D.C. and Charlotte, North Carolina, where protesters were effective at pressuring private hotels into canceling reservations.

American Renaissance, or AmRen — the 30-year-old white supremacist publication put out by the New Century Foundation — was the first to come to Montgomery Bell. While there have been different sponsors over the years, it’s always a mix of the same hate groups and participants.

For a while, there was only one conference per year. Then, starting in 2018 — around the time the Tennessee legislature killed that resolution denouncing white supremacy — it became a twice per summer affair. Not coincidentally, this is also when protesting started to get a lot harder.

Prior to that, protesters moved freely about the park. We chatted with the park rangers, ate meals in the restaurant and used the public restrooms in the State Park Inn & Conference Center — where the gatherings take place. We also reserved pavilions and held anti-racist teach-ins that brought everyone from church groups to the local NAACP out to protest.

In 2018, the state denied our usual permit to access the public restrooms and have pop-up tents and tables where we had gathered in the past. When we arrived, we were met with barricades, a “protest pen” and dozens of armed officers. 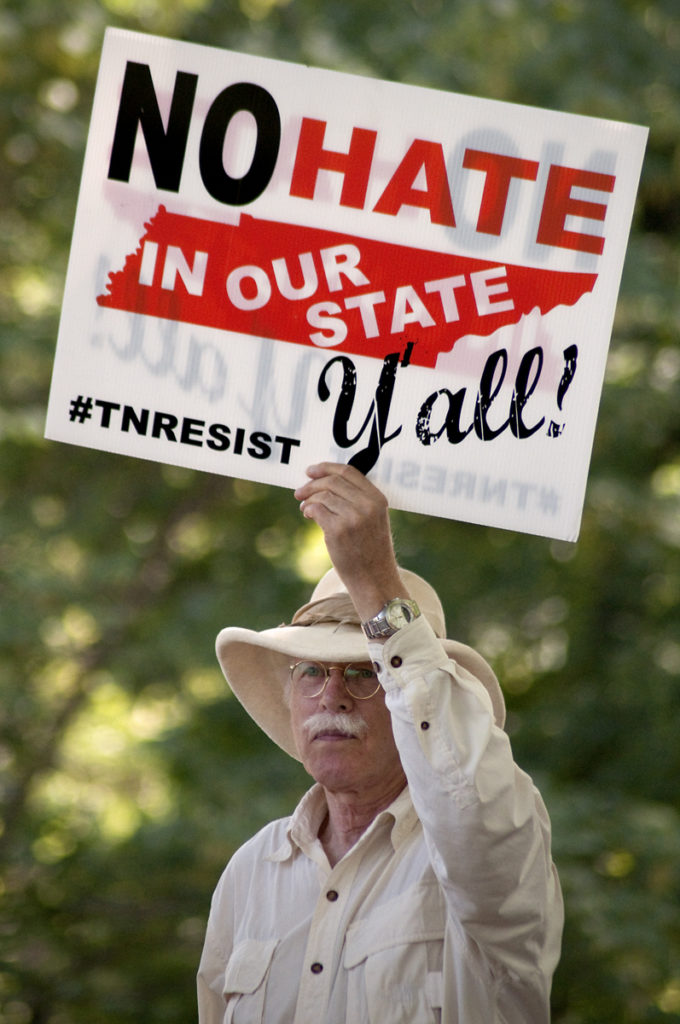 Nashville attorney Will York called the denial of the permit a reflection of Tennessee’s racist history, comparing it to “the 1950s sit-ins, when the state protected white business owners wanting to keep people of color from certain establishments. These conferences are virulently racist, and the state is complicit in effectively banning all people of color from the lunch counter in our publicly-funded state park.”

Ultimately, the state’s actions had the desired effect. Our numbers dropped to less than 20 people at the second conference in 2018.

Nevertheless, we returned to the park in May to protest another AmRen conference. This time, we had a group of about 50 activists ranging from individuals aligned with antifa to those with a deep commitment to nonviolence. Despite differences in beliefs and tactics, all agreed to act together — something made possible by years of relationship building and an overall mutual respect for the core work of anti-racism.

Our march was met by a police line on the road to the inn, preventing us from approaching the front of it. At this point, we didn’t know about the spot by the lake that we would use a month later. So, we hunkered down for a standoff with the police. After a few hours in the hot sun, someone squeezed a plastic bottle, shooting a stream of water into the air. Whether it was an accident or a harmless act of frustration is unclear, but it was all it took to get the police — some mounted on horses — to attack the protesters.

Four people were arrested and held in jail under cash-only bonds, an unusually harsh penalty for Dickson County. One protester was charged with felony aggravated assault because of the water. Another is still recovering from seven broken ribs, a broken nose and a displaced heart defibrillator.

Naturally, we expected more of the same when we returned to Montgomery Bell in June to protest the National Solutions Conference. 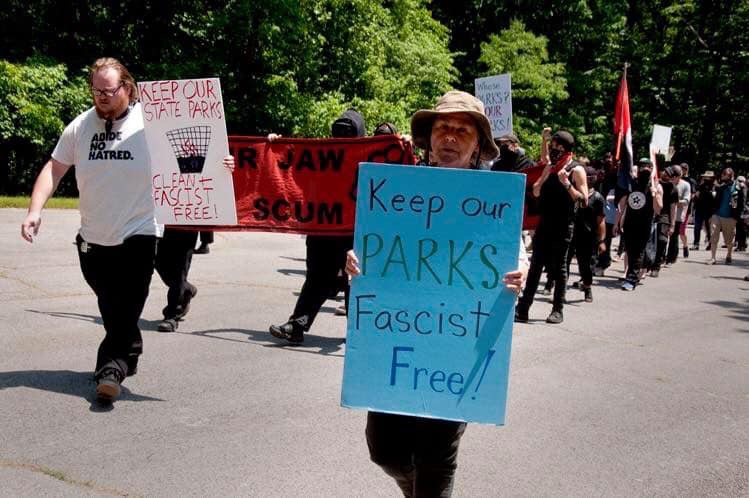 Protesters range from individuals aligned with antifa to those with a deep commitment to nonviolence. (WNV/Alvine)

This time, however, the police had set up the barricade in such a way that we were funneled down a road we hadn’t noticed before. At first, we assumed it would take us further away from the conference center, but much to our surprise we found ourselves by the edge of the lake — facing the back of the inn. We weren’t more than a stone’s throw away.

Part of me believes that this was a smart change in strategy by the police. They got what they wanted (the protesters in an area separate from the white supremacists that they could control) and we got what we wanted (a spot close enough to make our presence known). That said, it was likely just dumb luck on both of our parts. Looking back, the police probably expected us to stop at the barricade and for there to be another standoff. Regardless, if it was strategy or luck, for the first time in four conferences, the white supremacists could see and hear us.

What most of them didn’t realize, however, is that we could also see and hear them. Irwin was on the inside, and he was recording everything.

Despite being well known throughout Tennessee for showing up at white supremacist events to heckle participants, Irwin was able to walk in the front door and pay his entry fee like everyone else attending the National Solutions Conference. No one stopped him and — unlike most people there — he made no effort to conceal his identity.

At one point, Irwin even found himself sitting next to David Duke. So, he introduced himself and told the former Ku Klux Klan grand wizard that he was an antifascist. There was no response from Duke or other conference-goers as they learned Irwin’s identity.

“I don’t think they knew what to do with me,” he said. “But by the end of the second day they were getting some ideas.”

Nevertheless, that’s not what frightened Irwin the most. It was the organizing he saw.

“There were tables laden with propaganda — talk about alternative financial networks. I heard some crazy stuff, but I saw organization. They’re talking about brothers not fighting brothers anymore because they have one enemy. They’re flying fascists in to participate from around the world. These guys are serious. They can come up with large amounts of cash.”

Irwin said he didn’t see that kind of organization — or desire to work together — among antifascists and anti-racists.

“Good anarchists and activists are always fighting with one another. We’ve benefited for decades with them fighting each other, but they’re starting to put the knives down. We’re not.”

According to Irwin, they’re creating structures and frameworks for when climatic or economic collapse occurs, and they have a network that crosses the nation.

“We’re just on the internet. We’ve abandoned that ground. We’re one economic collapse away. We’re not prepared. They are.”

Irwin said that the first step toward building an antifascist movement that can effectively respond in the present and future is to organize at the community level, face to face.

“We’re going to lose if it comes down to violence,” Irwin said. “If this becomes about violence, they’re going to beat us.”

Despite their efforts at organizing, Irwin noted that it’s not their strength.

“They’re worried about organizing. They know that’s where they’ll get beat. If it comes down to punching it out with them, that’s fighting on their ground. They’d love it.” 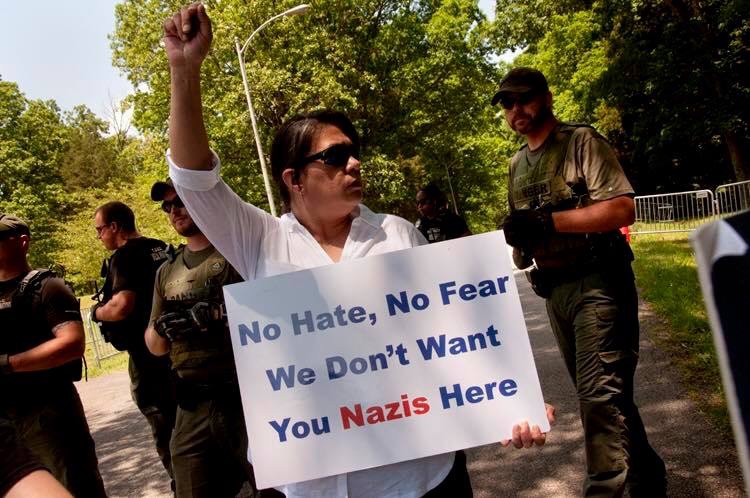 Tennessee activists are planning to do more organizing throughout the year, and not just in Montgomery Bell State Park. (WNV/Alvine)

While those of us organizing around Montgomery Bell were already thinking along these lines, Irwin’s undercover work confirmed our intuition. Now more than ever, we realize our organizing can’t be confined to the conference and the week leading up to it.

Going forward, we’ll be organizing in Burns and the surrounding communities in the months before and between the conferences. We want to do our own flyering and chalking, and we want to meet with local congregations and organizations to talk about what is happening in their own backyard.

That’s what it means to fight on our ground. What’s more, it’s something most of us are already doing on a daily basis. If we can do it more consciously and in unison, then we can create an antifascist movement that’s able to respond in the present, as well as in the future, leaving little space for violent and hateful ideologies to spread.