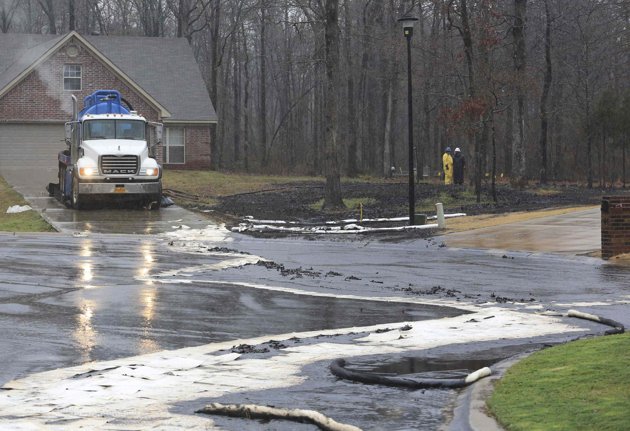 The March 29 rupture of Exxon Mobil’s Pegasus pipeline—which flooded a Mayflower, Arkansas neighborhood with over 200,000 gallons of tar sands oil—was likely caused by known “manufacturing defects,” with grave implications for the tens of thousands of similarly built pipelines still in the ground and operating, according to a review released Thursday.

An examination of the 70-year-old Pegasus pipeline and its 22-foot-gash found that the pipeline failure “resulted from an original manufacturing defect of the electronic resistance welded (ERW) pipe,” according to a spokesman from the Hurst Metallurgical Research Laboratory.

Citing an ongoing investigation, both Exxon and the Pipeline and Hazardous Materials Safety Administration (PHMSA) waited nearly a month after receiving the report before releasing the details to Arkansas newspaper Log Cabin Democrat Thursday.

Implications of the report are significant as it shows that pipelines “similarly manufactured, and in the same era as the ruptured line in Mayflower, are inferior and susceptible to failure,” the Democrat reports.

A pipeline industry insider who declined to be named told Common Dreams that there are “tens of thousands of miles of pipeline in the ground and operating from the approximate vintage” as the Pegasus pipeline.

“The fact of the matter is, any pre-1970s pipeline was manufactured with old technologies,”  John Tynan, Watershed Protection Manager with Central Arkansas Water, told Common Dreams.

“The only way to eliminate their risk is to completely remove the pipelines and shut down the operation,” he added.

A 1998 assessment of ERW pipelines conducted by the National Institute of Standards and Technology under the U.S. Department of Commerce found that pipelines manufactured in the 1940s using the ERW technique are “inherently susceptible to seam failures.”

Trade publication “Oil and Gas Journal” author Dr. John F. Kiefner, founder of Kiefner and Associates pipeline consulting firm, of which Exxon is a client, points to pressure management as a solution for the widely “problematic ERW pipe.” […]

Kiefner wrote in a 1992 report published in the journal that raising the pressure level in a defective segment of pipe can lead to failure, and flaws in ERW pipelines may grow while the pipe is in service, due to large pressure fluctuations.

“A change in the direction of flow can affect the hydraulic and stress demands on the pipeline,” PHMSA’s corrective order issued to Exxon after the March 29 spill states.