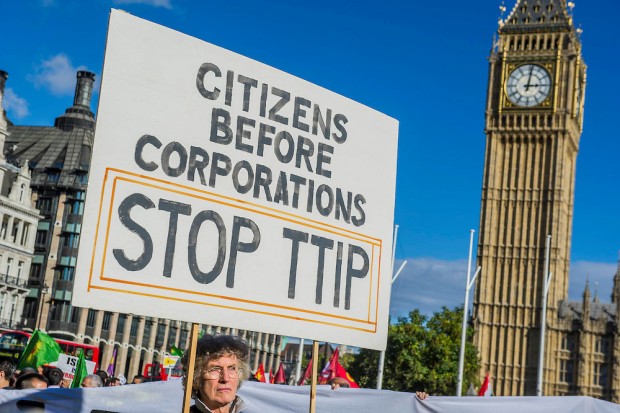 Across Europe on April 18th there were protests against the Transatlantic Trade and Investment Partnership (TTIP).  Below are reports from around the world.

There is intense opposition to the Transatlantic Trade and Investment Partnership (TTIP). The next round of talks on the proposed pact are due to begin in New York on Monday, aiming to remove customs and regulatory barriers between the United States and Europe.

Saturday’s rallies were organised by an international alliance of non-governmental organisations, unions, political parties and other groups across some 45 countries.

An estimated 22,000 people marched in Austrian towns and cities. Many believe the pact will damage the country’s agricultural and pharmaceutical sectors as well as consumers.

In Vienna organisers said 15,000 turned out; the police put the number at 6,000. There were also demonstrations in Graz, Linz and Klagenfurt.

Of more than 200 protests across Germany on Saturday, more people turned out in Munich than in any other city, including Berlin.

DW reports: More than 200 demonstrations took place across Germany on Saturday as demonstrators marched to protest at the Transatlantic Trade and Investment Partnership (TTIP), a free trade agreement currently being negotiated between the European Union and the United States.

Thousands of people attended rallies in cities and towns including the capital, Berlin, Hamburg, Frankfurt and Stuttgart.

In all, some 600 anti-TTIP protests were planned across the world for Saturday.

Reuters reports: Thousands of people marched in Berlin, Munich and other German cities on Saturday in protest against a planned free trade deal between Europe and the United States that they fear will erode food, labor and environmental standards.

Opposition to the Transatlantic Trade and Investment Partnership (TTIP) is particularly high in Germany, in part due to rising anti-American sentiment linked to revelations of U.S. spying and fears of digital domination by firms like Google.

A recent YouGov poll showed that 43 percent of Germans believe TTIP would be bad for the country, compared to 26 percent who see it as positive.

The level of resistance has taken Chancellor Angela Merkel’s government and German industry by surprise, and they are now scrambling to reverse the tide and save a deal which proponents say could add $100 billion in annual economic output on both sides of the Atlantic.

In Berlin, a crowd estimated by police at 1,500 formed a human chain winding from the Potsdamer Platz square, past the U.S. embassy and through the Brandenburg Gate to offices of the European Commission.

In Munich, police put the crowd at 3,000, while organizers Attac estimated it at 15,000. Hundreds also marched in Leipzig, Stuttgart, Frankfurt and other European cities on what Attac hailed as a “global day of action” against free trade, though the protests appeared to be largest in Germany.

“I think this deal will open the door to genetically-modified foods here,” said Jennifer Ruffatto, 28, who works with handicapped people and was pushing her baby in a stroller. “Companies will gain from this at the expense of people.”

Helmut Edelhauesser, a 52-year-old from Brandenburg, said he would prefer a free trade deal with Russia.

“The U.S. push for world domination is unacceptable,” he told Reuters. “Obama sends out drones to kill people and wins the Nobel peace prize. This has to stop.”

RT summarized the day and provided video and photos:

Protesters across the EU and US have staged a day of action against an emerging free trade pact between the two continents. They fear it could see corporate interests undermine workers’ rights and consumer protection.

Crowds have gathered in London, Munich, Brussels and other major European cities to march against the Transatlantic Trade and Investment Partnership (TTIP) and similar secretive international trade deals.

The day of action consisted of over 700 separate events, including rallies, marches and public statements. All were organized by a variety of civil rights movements in the EU and across the Atlantic. Once the attendance has been officially counted and thus confirmed, it could mark what might have been the largest protest against free trade agreements to date.

Over 500 protests taking place around the world against free trade pacts today – this is global resistance! #A18DoA pic.twitter.com/J4ogkfiTxg

Most protests have taken place in the center of EU economic activity – Germany.

Berlin police said the the crowd was at least 4,000-strong. It formed a human chain from Potsdamer Platz public square, past the US Embassy and through the iconic Brandenburg Gate to the offices of the European Commission.

In Munich, police estimated that the number stood at 3,000, while rally organizers said there were as many as 15,000 people present.

“We are convinced that the entire public interest is at stake, whether water, energy, health, and public transport. The communities are largely deprived of their ability to act,” Organisers in the German town of Schnaittach said.

Protesters say TTIP and similar deals will endanger workers rights and the environment, as well as potentially leading to the privatization of public services and an influx of unregulated genetically-modified foods.

“For the last decades, secret trade and investment agreements have been pushed by corporations and governments, damaging our rights and the environment,” says a statement on globaltradeday.org, the website of one of the groups behind the protests.

According to the latest YouGov survey, 43 percent of Germans believe that the agreement would have a “bad” impact on their country. Some 30 percent Germans see the agreement as “good.” Seven other EU countries’ data showed similar negative outlook.

Meanwhile in Spain’s capital Madrid, over 20,000 people came out to have their voice heard. Another 4,000 showed up in Barcelona to protest against the proposed agreement.

The deal would translate into “an enormous setback for the rights acquired by the Europeans, and consolidation of corporate power against states and people,” organizer Juan Antonio Lopez de Uralde told the crowd.

Several thousand people also joined a rally against TTIP that took place in Brussels. Parties and organizations like Podemos, Die Linke, Syriza and Greenpeace joined the protest, as well as several unions. Local newspapers in Austria report that over 22,000 protested across the country on Saturday with 15,000 alone rallying in capital Vienna.

Meanwhile, in the US, people also marched across dozens of cities from New York to San Francisco, protesting against outsourcing jobs, environmental, health, and food safety.

The agreement, activists who gathered in San Francisco connected to workers health and safety because of “deregulation of health and safety protection and privatization of public services harming all working people.”

A day before the global action day, US President Barack Obama dismissed concerns that TTIP, saying the agreement would ‘absolutely’ benefit US workers, as he hopes to strike the deal with Brussels by the end of this year.

The agreement is being negotiated behind closed doors, with the next round of talks scheduled for Monday in New York. It will open free trade between the EU and the US, bringing down restrictions on the flow of goods. Its sister agreement, CETA (Comprehensive Economic and Trade Agreement), is aimed at achieving similar links between the EU and Canada.

TTIP is expected to be finalized by early 2016. It will become the most important and all-encompassing agreement of its kind, covering a market of over 800 million people. Its supporters hail the possible $100 billion yearly boost in trade between the EU and US. However, the deal has met opposition in Europe, with a recent European Parliament vote on its adoption being postponed after a draft resolution led to almost 900 proposed amendments.

The previous day of action took place in October 2014 and was hailed as a success by the Stop TTIP group, with hundreds of events across Europe, thousands of signatures on petitions against TTIP, and increased media attention on the movement.