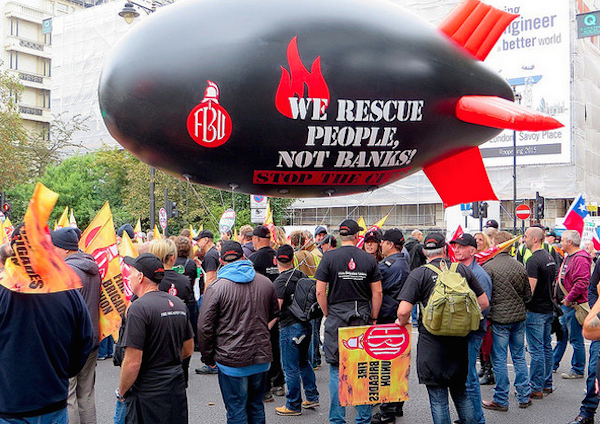 Tens of thousands of union members have marched through central London to highlight their calls for pay rises.

Members of Unite, Unison, the National Union of Teachers, the Communication Workers Union, the Royal College of Nurses and Equity took to the streets in the capital on Saturday, while other protests were held in Glasgow and Belfast. Pensioners and anti-nuclear activists also took part. The TUC, which organised the Britain Needs a Pay Rise demonstration to mark the end of industrial action by public sector workers, including nurses, midwives and civil servants, said up to 90,000 people were on the march.

Midwives went on strike for the first time this month to protest against the government’s decision not to pay a recommended 1% increase to all NHS staff. Hospital radiographers and prison officers are due to take action next week.

Nurses and midwives were well represented on the march, with some wearing T-shirts bearing the slogan “What if nurses just said no”.

Member of the Fire Brigades Union held aloft a blimp bearing the slogan: “We rescue people, not banks.” Police civilian staff, who are being balloted for strikes over pay, also joined the protest.

The TUC said workers were facing a significant squeeze on incomes, with average wages down by £50 a week in real terms since 2007 and 5 million people earning less than the minimum wage.

The TUC general secretary, Frances O’Grady, said the high turnout sent a strong message to the government that wages needed to rise.

“After the longest and deepest pay squeeze in recorded history, it’s time to end the lockout that has kept the vast majority from sharing in the economic recovery,” she said. “Meanwhile, top directors now earn 175 times more than the average worker. If politicians wonder why so many feel excluded from the democratic process, they should start with bread-and-butter living standards.”

Len McCluskey, general secretary of Unite, urged Labour to offer a “clear socialist alternative” at the next election. He said: “I say to Labour – stop being scared of your own shadow. Don’t shrink what you offer the British people.

He accused the coalition of “dismantling and destroying” every gain working people have made since 1945, adding: “Their mission is to dismantle the NHS – slicing it up bit by bit and handing it on a silver platter to their friends in the private health companies.

“They are seeking to destroy the welfare state – characterising anyone who uses the benefit system in their time of need as a scrounger.”

Dave Prentis, general secretary of Unison, said 600 public sector jobs had been lost every day since the coalition came to power.

“We have a story of two nations – one where champagne corks are popping for the bankers and boardroom pay is soaring, while in the other world our people are suffering from poverty pay.”

Sadiq Khan, the Labour MP for the south London constituency of Tooting, who was on the march, tweeted that one third of Londoners were living in poverty, despite two thirds being in work.

The march, which began at midday, crossed Trafalgar Square and travelled to Piccadilly before ending in Hyde Park.