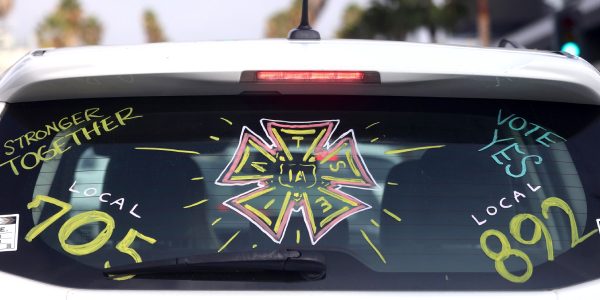 A strike that would have begun Monday (October 18) by the International Alliance of Theatrical Stage Employees (IATSE) has been averted, with the union representing production crew reaching a three-year deal with the Alliance of Motion Picture and Television Producers (AMPTP).

The tentative deal is for the Basic and Videotape Agreements, which affect some 40,000 film and television workers.

According to IATSE, the proposed contract addresses issues at the heart of the dispute, including “reasonable” rest periods, meal breaks, a living wage for workers at the bottom of the pay scale and “significant” increases in compensation from new media companies.

The tentative agreement, which still must be ratified by IATSE members, features as deal points a living wage for the lowest-paid earners; improved wages and working conditions for streaming; retroactive wage increases of 3% annually; increased meal period penalties; daily rest periods of 10 hours without exclusions; weekend rest periods of 54 hours; the addition of Martin Luther King Jr.’s birthday added to the schedule as a holiday; and adoption of diversity, equity and inclusion initiatives.

One point that many film and TV workers had complained about was the erosion of the weekend, with the workweek ending with late Fridays frequently running into Saturdays, which became commonly known as “Fraturday.” The new agreement includes a minimum period of rest over weekends.

Two weeks ago, IATSE members who work in TV and film production at 36 IATSE local unions across the U.S. voted to authorize the union’s international president to call the first nationwide strike in the union’s 128-year history if talks didn’t result in new contracts for 60,000 film and TV workers that fall under the Basic Agreement and the Area Standards Agreement. Voter turnout was 90%, with 98.6% voting to authorize a strike.

“Our members will see significant improvements, but our employers also will benefit,” said Mike Miller, vice president and motion picture director for IATSE, in a statement. “This settlement allows pre-production, production and post-production to continue without interruption. Workers should have improved morale and be more alert. Health and safety standards have been upgraded.”

“This is a Hollywood ending,” added IATSE International president Matthew Loeb. “We went toe to toe with some of the richest and most powerful entertainment and tech companies in the world, and we have now reached an agreement with the AMPTP that meets our members’ needs.”

Negotiations are ongoing for workers under the similar Area Standards Agreement and who belong to IATSE local unions in major production hubs such as New Mexico, New York, Illinois, Georgia and Louisiana.