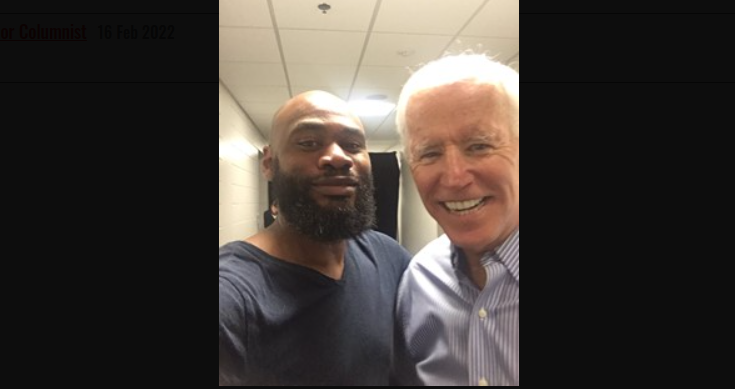 Black Agenda Report’s analysis of the US instigated crisis in Ukraine makes clear that imperialism is the source of turmoil in that country.

In recent weeks Black Agenda Report contributors have regularly commented on the United States instigated crisis in Ukraine. “Ukraine: What Does It Have to Do With Black Folks,” “Crisis or Confusion: A Brief Guide for Black Folk on Ukraine,” ”Ukraine and U.S. War Propaganda,” and “The Black Political Class and War” are efforts to clarify what the U.S. is doing and why. Black Agenda Report is committed to news and analysis from a Black left perspective and must explain how the imperatives of imperialism and full spectrum dominance drive U.S. actions abroad.

Of course contributors on this site are not the only Black people commenting on Ukraine. Terrell Jermaine Starr is among the most prominent of those who defend United States imperialism itself. He is very useful in this role as he is a Black person who claims to hold progressive views. As such he gives cover to a dangerous policy which perpetuates state violence.

Starr is a correspondent at The Root and a nonresident senior fellow at the Atlantic Council Eurasia Center. The Atlantic Council describes itself as “a nonpartisan organization that galvanizes US leadership and engagement in the world, in partnership with allies and partners, to shape solutions to global challenges.” In short, it is the propaganda arm of NATO . Donors include the British Foreign Office, Swedish Ministry for Foreign Affairs, the ministries of defense of Finland, Lithuania, and Norway, Embassy of the United Arab Emirates, Facebook, Goldman Sachs, the Rockefeller Foundation, Airbus, Google, JP Morgan Chase Foundation, Raytheon, and NATO itself. The list is a who’s who of governments, international financial institutions, the military industrial complex, and wealthy individuals who want to protect the status quo.

Starr is the perfect person to make the case for the latest rogue state action. His Atlantic Council profile page shows that he is a public relations dream come true. He is a Russian speaker with the twitter handle @Russian_Starr . Not only is he a Black man, but also a graduate of an HBCU, who wrote a book about his drug dealing uncles, and who also wears a t-shirt with an image of Angela Davis. The image making should not be dismissed, as it gives him credibility in making the case for US hegemony.

Starr’s narrative includes supposedly progressive politics, as he states in “Why Progressives Should Help Defend Ukraine ,” conceding US “mistakes” and admitting that the US is an imperialist power. “The United States isn’t the only imperialist nation out there, and Moscow and Beijing won’t transform into paragons of good behavior with Washington off the scene.”

His arguments about Russian power fall apart when one acknowledges that US defense spending is twelve times greater than Russia’s. The US has 800 military bases in 80 countries while Russia has between 26 and 40 in nine countries. One nation is expansionist, destroying nations like Libya, attempting the same in Syria, sanctioning Venezuela, Cuba, and Iran and causing great suffering to their people. Russia did not interfere in Ukraine’s affairs as the US did in the 2014 coup. All of that country’s problems stem from the US decision to side with the most retrograde factions, driving wedges amongst an already divided population and starting a civil war that has killed 14,000 people. The U.S. did Ukraine no favors as it is now the poorest country in Europe, a de facto colony of Washington living on its largesse, prevented from carrying out the peace that its people want, and forcing it to commit dangerous acts in order to justify an attack on Russia.

Comparisons of US and Russia military power prove that ginned up fear mongering is a ploy meant to frighten the public into supporting military expenditures, and silencing them about what the US is up to around the world. Starr doesn’t bother with such mundane issues. In his article, “Why Black People Should Care About Ukraine Explained ,” he repeats US talking points about election interference in Trump’s 2016 victory and throws in a few more of his own that will resonate with his intended audience. “Ukrainians are essentially seen as slaves in Putin’s eyes. But, like Black folks in America, Ukrainians got a taste of that good ol’ freedom and have no interest in going back to Massa’s house.”

He conveniently leaves out any mention of the fascist Ukrainian proxies who helped the US during the 2014 coup which brought down an elected president. The Azov Battalion and Right Sector are key players in Ukraine, preventing the country from fulfilling its pledge to engage with the Donbas republics in the eastern regions, in violation of UN Security Council Resolution 2202 . Of course Starr has plenty of help from international media, who in their zeal to follow their governments’ commands to create war propaganda about civilian militias in Ukraine also clearly show the Azov Battalion’s Nazi inspired Wolfsangel insignia without comment of any kind.

Starr’s prominence is an indication that war propaganda can leave no stones unturned. It isn’t enough to have corporate media repeat US assertions that Russia plans a Ukrainian invasion without question or analysis. It isn’t enough to have members of congress, even those who claim to be on the left, accept the narratives and censor any misgivings they may have.

It isn’t necessary to recount all of Starr’s missives. It is important to restate how anti-imperialists must approach these issues. People in this country must condemn all of its aggressions. Every act of interference, every invasion, coup, sanction, and proxy war must be condemned. There is no need to defend or explain on behalf of the targeted country. The job of the anti-imperialist is to be unswerving in their opposition to terrorizing people around the world.

The United States is doing just that. It threatens its ally Germany because it dared to negotiate an agreement to build the Nord Stream II gas pipeline with Russia. The entire adventure is a dangerous and misguided effort to short circuit any European plan to integrate with Russia. Doing so cuts the U.S. out of the picture and makes claims of Russian danger a lie, and makes the claims for the need of the NATO alliance a lie as well.

NATO can and should be disbanded. It is an arm of U.S. aggression and causes devastation from Afghanistan to Donbas. The entire project is a facet of white supremacist policy, which says that the US and Europe can make decisions for everyone on the planet. Ukrainians suffer too as panic destroys their economy and puts them at risk as the US goads their government into taking action that would create a pretext for some sort of attack on Russia.

If there is clarity on these issues, the Starrs of the world can be ignored. Until that time any effort to tie the fate of Black people in this country to another imperialist misadventure must be exposed. Strengthening the Black radical peace tradition is a political necessity that can save this country and others from great dangers.

Margaret Kimberley is the author of Prejudential: Black America and the Presidents . Her work can also be found at patreon.com/margaretkimberley  and on Twitter @freedomrideblog. Ms. Kimberley can be reached via email at Margaret.Kimberley(at)BlackAgendaReport.com.