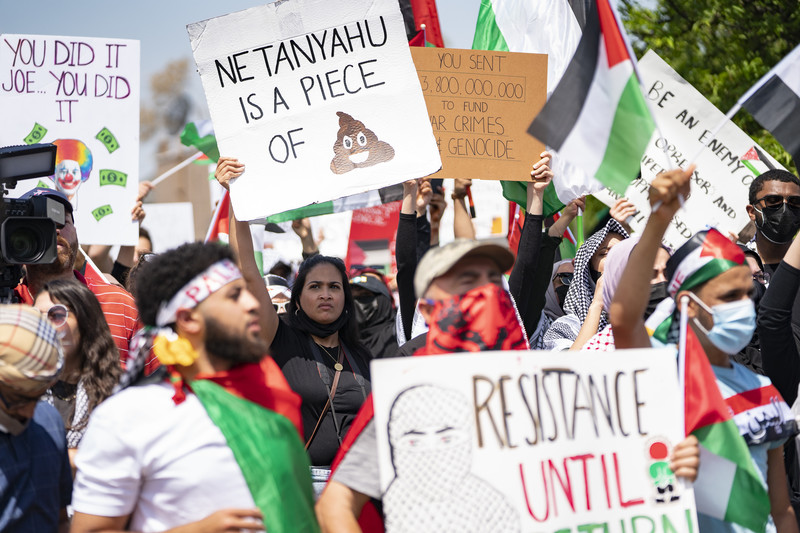 Above Photo: Israel’s designation of six Palestinian rights groups as “terrorist” should not deter pro-Palestine solidarity groups in the US. Dominick SokotoffZUMA.

It was a move quite aptly characterized as “authoritarian and repressive” by Palestinian poet and writer Mohammed El-Kurd in The Nation.

At the time, Israeli Defense Minister Benny Gantz claimed that Addameer, Al-Haq, Defense for Children International – Palestine, the Bisan Center for Research and Development, the Union of Palestinian Women’s Committees, and the Union of Agricultural Work Committees are tied to the Popular Front for the Liberation of Palestine (PFLP.)

But recent reporting in +972 Magazine revealed that the so-called “evidence” behind Gantz’s claim was based on unsubstantiated testimonies, possibly obtained through torture, and that these testimonies connected the six Palestinian organizations to the PFLP by way of decidedly non-militant activities like … er … poetry classes.

As Yuval Abraham, Oren Ziv and Meron Rapoport write: “In fact, contrary to the Israeli Defense Ministry’s claims, the dossier did not provide a single piece of evidence proving the six organizations diverted their funds to the PFLP or to violent activities.”

Then, on 16 November, an Israeli military court refuted Gantz and Foreign Minister Yair Lapid’s claim that a Spanish woman convicted of fundraising for the PFLP was in any way tied to the six organizations. Israel had intended to use this case as evidence validating Gantz’s designation.

Her lawyers wrote to the court that “regrettably, the court and military prosecutors became accomplices, whether knowingly or by closing their eyes, to a trick” and that Gantz and Lapid’s statement put their client in jeopardy of criminal prosecution in Spain as an activist in a group Haaretz referred to as a “terror organization.”

Yet as laughable as the Zionist state’s threadbare case may be, there is a colonial utility and logic behind this latest assault on Palestinian efforts to defend themselves.

Elsewhere in these pages, Ali Abunimah and Maureen Clare Murphy report that some of the six targeted groups have cooperated closely with the International Criminal Court in its war crimes probe in the West Bank and Gaza.

“Gantz’s conduct may come under ICC scrutiny as he twice perpetrated major massacres of Palestinians in the Gaza Strip, as army chief of staff in 2014, and as defense minister earlier this year, when he vowed that ‘no person, area or neighborhood in Gaza is immune.’”

In other words, this could be a preemptive move on Gantz’s part to shirk accountability for slaughtering Palestinians. Abunimah and Murphy further note that criminalizing these organizations is a way for Israel to undermine their international funding and to deter broad-base fundraising.

Agha adds: “The goal is clear: to silence the independent monitoring of Israel’s human rights violations that stand between total annexation of the occupied West Bank and international accountability … It will be harder to hold Israel to account if some of the most important Palestinian rights organizers are silenced, weakened or eliminated.”

Even more alarming, while the declaration initially only applied to the 1948 territories – Israel’s boundaries before its 1967 occupation of the rest of historical Palestine – five of the six organizations have since been declared illegal in the West Bank. (The Union of Agricultural Work Committees had already been declared to be illegal in the West Bank as of January 2020).

This limits the scope of their operations even more.

Jamil Dakwar, director of the human rights program at the American Civil Liberties Union (ACLU), tweeted this is a move that makes it possible for Israel “to close their offices and subject their staff to criminal sanctions as well as administrative detention.”

On 8 November, several human rights organizations, including Human Rights Watch and 7amleh – The Arab Center for the Advancement of Social Media, released a statement condemning the use of Pegasus spyware to infect cellphones of six Palestinian human rights defenders, three of whom currently work for organizations targeted by Gantz’s designation. These revelations were made by Front Line Defenders and corroborated by Citizen Lab and Amnesty International.

Furthermore, The Washington Post recently released a critical report outlining a massive Israeli surveillance program in the West Bank. The Israeli military, according to the article has developed a massive facial recognition initiative that uses smartphones and cameras to spy on Palestinians en masse.

The program involves a technology called Blue Wolf that uses smartphones to photograph Palestinians’ faces and match them against a database exhaustively compiled by occupation soldiers.

The number of Palestinians photographed is unknown but reportedly runs into the thousands. Former Israeli soldiers, according to The Washington Post, attest that Blue Wolf’s expansive database is a modified version of another database called Wolf Pack, which “contains profiles of virtually every Palestinian in the West Bank, including photographs of the individuals, their family histories, education and a security rating for each person.”

Besides Blue Wolf, occupation forces installed face-scanning cameras in Hebron to identify Palestinians at checkpoints before an ID card is even presented. A network of closed-circuit television cameras provides real-time monitoring of the city’s inhabitants and is reportedly even able to see into homes.

Gantz’s edict is thus symptomatic of a wider pattern of Zionist repression and criminalization of Palestinians. It also reflects the tired, instrumentalized paranoia and weaponized fragility of colonial Zionist ideology, which strategically equates any and all criticism of Israeli policy or politics with “anti-Semitism.”

As Jonathan Cook writes, labeling “Palestinian human rights activists as ‘terrorists’ will serve the same goal as labeling western activists seeking to end Israel’s oppression of Palestinians as ‘anti-Semites,’ or labeling Jews acting in solidarity with Palestinians as ‘self-hating’ and ‘traitors’.”

Cook adds, “Israel will bundle all this supposed ‘hate’ into its existing narrative that it is facing a campaign from all sides to ‘demonize’ the only Jewish state in the world.”

However flimsy the evidence, and however transparently political the designation was in the first place, it could still have major international repercussions.

Yara Shoufani writes that the international risks for the targeted organizations include foreign governments deciding to follow Israel’s lead.

Specifically, Shoufani notes that if the US alone concedes, this could have disastrous implications for the organizations’ ability to access finances, given that “49 of the 50 largest banks in the world use the same ‘World-Check Risk Intelligence’ record.”

Fortunately, there has already been some international pushback: On 17 November, over 100 artists including Naomi Klein, Mark Ruffalo and Susan Sarandon signed a statement critiquing the designation.

That followed a 16 November open letter from more than 100 philanthropic institutions and individual donors denouncing “smear campaigns” against the six rights groups and urging governments around the world to pressure Israel to rescind the designation while allowing funding to reach its intended targets without hindrance.

Inside the US, some, including David May and Jonathan Schanzer with their op-ed in Newsweek – a publication which seems to be competing with The New York Times in its attempt to serve as unadulterated Israeli propaganda – argue that US-based organizations working on Palestinian rights should keep their distance from the targeted organizations.

But this is most likely an overestimation.

According to Liz Jackson, senior staff attorney at Palestine Legal, a legal rights group set up to support those promoting Palestine solidarity in the US, there is “no direct legal effect in the US based on the Israeli designation.”

This is so, Jackson told The Electronic Intifada, because these organizations have not been designated as “terrorist” organizations under US law and there is no credible evidence that they are agents of a designated organization.

We must note that the Palestinian human rights defenders in the six targeted civil society organizations are not designated as “terrorists” in the US.

However, these efforts abroad build from the same fearmongering and repression that has taken place in the US against Palestinian organizations. We are painfully aware of this legacy, not least with the unjust branding and retaliation against the Holy Land 5 for their humanitarian work and contributions to civil society and the abhorrent prison sentences allotted to their board members.

Zionist organizations in the US will continue to try to use this latest designation to delegitimize even more the work of organizations fighting for Palestinian liberation and freedom, regardless of US law.

Indeed, US Vice President Kamala Harris recently declared that singling out Israel is “anti-Semitism” in a speech to the Anti-Defamation League, a notoriously anti-Palestinian organization.

But there is an inherent contradiction at play here, given that pushing Israel to be held accountable to international standards has nothing to do with bigotry and in fact constitutes the exact opposite of singling out.

Consequently, while taking solace in the fact that advocacy for Palestinian freedom remains largely lawful, Zionists and Israeli proxies will try to expand the repressive measure and push for further circumventions of Palestine organizing and activism – as they have always done.

Yet activist support must not waver – even when it comes to donating to these organizations. Rather than succumbing to Israel’s attempted chill, we need to remember that nothing has changed under US law, and our support needs to remain steadfast, even increased at such a critical moment of colonial repression.

According to Jackson, Israel’s latest designation works to create multiple links in the chain of “alleged guilt by multiple degrees of association.”

In other words, Israel is attempting to substitute fearmongering in place of evidence. Zionist organizations will certainly seize on this designation to attempt new rounds of smear and harassment campaigns against people who support and work in coalition with these organizations.

“But this was true before,” Jackson concluded, “and our job is to continue to make sure that these and other Palestinian groups are not isolated, because they have protection in our solidarity and in our work to ensure that these designations are revoked, discredited and not replicated.”

As supporters of Palestine and those who support the pursuits of occupied peoples against their occupiers, activists can rise to the call to support these six Palestinian civil society groups at the very time when most needed. Each organization holds an important role in supporting freedom and liberation for Palestinian people and, as many have substantiated, they represent a critical block to the expansion of Israeli settlements and the colonization of land and resources.

In the face of fearmongering and criminalization by the Israeli state, it is important that all individuals dedicated to the total liberation of Palestine remain principled, steadfast and united.