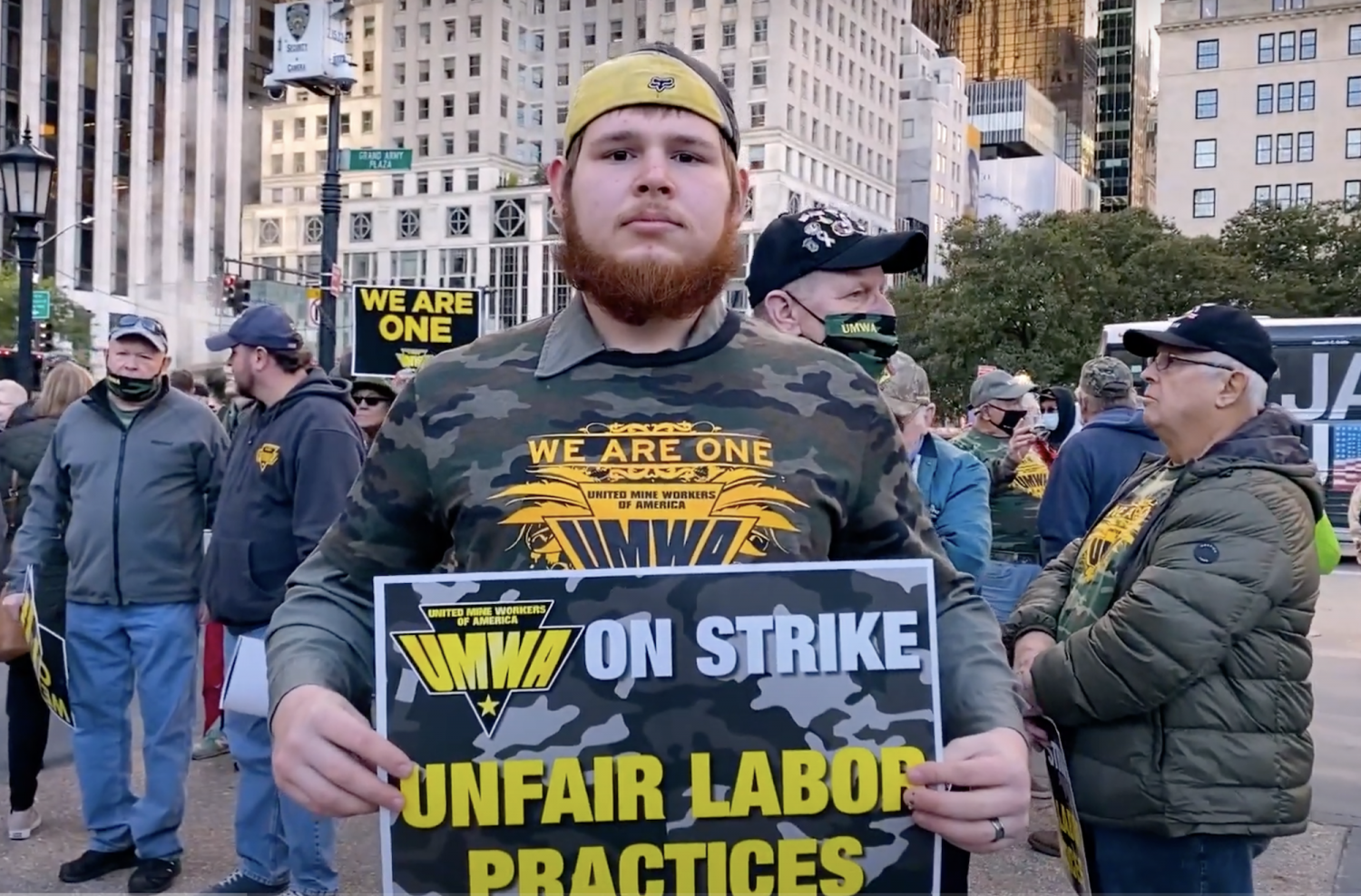 Above Photo: UMWA-affiliated mine workers at Warrior Met Coal in Brookwood, Alabama, have been on strike since April 2021. Last November, they held a protest in New York City outside of BlackRock, a hedge fund that owns the largest stake in Warrior Met. Still from UMWA footage of that protest.

This month marks one year since 1,100 members of the United Mine Workers of America went on strike at Warrior Met Coal in Alabama following the failure of the union and company to agree on a labor contract. The strike continues today.

Warrior Met was created to buy the assets of Walter Energy after that company declared bankruptcy in 2015. A number of hedge funds own shares in Warrior Met, with New York-based BlackRock — the world’s largest asset manager — controlling the most, at about 13% at the end of 2021.

Earlier this year, Senate Budget Committee Chair Bernie Sanders (I-Vermont) held a hearing on Wall Street greed and growing oligarchy in the United States that used Warrior Met as a case study. Sanders invited the CEO of BlackRock to appear at the hearing, along with those from two other hedge funds and Warrior Met, but they all declined to testify.

When Warrior Met was facing bankruptcy, workers agreed to an across-the-board wage cut of 20% along with cuts to their health care and retirement benefits as part of a restructuring deal made by the private equity firms, saving the company an estimated $1.1 billion over the past five years. Since 2017, Warrior Met has paid over $1.5 billion in dividends to its shareholders while paying its CEO over $4 million per year.

“Yet, now that the company has returned to profitability and has seen its stock price skyrocket by 250% during the pandemic, Warrior Met has offered its workers an insulting $1.50 raise over five years and has refused to restore the health care and pension benefits that were taken away from them five years ago,” Sanders said in a statement announcing the hearing. “Outrageously and unacceptably, the company has also demanded the power to fire workers who engage in their constitutional right to strike and give seniority to new hires, rather than miners who have given their adult lives to Warrior Met.”

Among those who spoke at the hearing was Braxton Wright, a Warrior Met miner and striking UMWA member. He called on lawmakers to support the “Stop Wall Street Looting Act,” a measure sponsored by Sen. Elizabeth Warren of Massachusetts and Rep. Mark Pocan of Wisconsin, both Democrats, to help to reform the private equity industry and to give employee compensation higher priority in bankruptcies. This is Wright’s written testimony from the hearing.

Testimony of Braxton Wright
Member, United Mine Workers of America
Local Union 2368Before the U.S. Senate Committee on the Budget
Feb. 17, 2022

Chairman Sanders, Ranking Member Braun, Distinguished members of the Committee, my name is Braxton Wright and I have worked at the mines in Brookwood, Alabama, for over 17 years. I come from a family of coal miners. My grandfather was injured and later died due to a mining accident at Black Diamond Mines in West Blocton, Alabama. My father worked in the mines, my father-in-law is a retired UMWA miner who retired at the time of the Walter Energy bankruptcy after more than 30 years working in the mines.

Today I would like to speak with you about how private equity firms such as Apollo, Blackstone, and other private equity who held stock in Walter Energy dictated the terms and conditions of the 2016 takeover of Walter Energy, which was renamed Warrior Met Coal, and what that means to workers, families, and communities. These private equity investors bear much of the responsibility for the cuts in pay and benefits that have led to the United Mine Workers unfair labor practice strike at Warrior Met.

The past five years working under this bankruptcy contract has affected the miners and their families drastically. These private equity groups have played a role in the exploitation of the UMWA miners as well as numerous other workers who do not have the benefit of union representation.

Due to the Chapter 11 bankruptcy filed by Walter Energy in 2016, miners took massive concessions in order to save the company and bring it out of bankruptcy. These concessions included a $6 an hour pay cut depending on your grade of pay, which by itself placed a huge strain on workers and their families. When you are required to work 12 hours a day, six to seven days a week, you are lucky if you see your spouse or children more than a few hours a day. Before the bankruptcy contract many spouses stayed home because the pay and benefits allowed for families to live well. After the bankruptcy many spouses were forced to work outside the home while still being the primary caregiver for their home and family. So children saw BOTH parents less as a result of the cuts in the bankruptcy contract.

It would break your heart to hear how many times my oldest daughter Averi would ask me why weren’t you at my game, why didn’t you come to my field trip or awards day at school, why can’t you go with us to the park? Every time I had to answer, “I had to work,” or “I had to sleep,” knowing that my child deserved to have time with both her parents. There have been hundreds of children asking these same questions to their parents for the past five years.

While Warrior Met claims to give us eight holidays, in actuality the only dedicated holidays we spent with our families were Thanksgiving, Christmas Eve, and Christmas Day. The others were considered floating days which had to be approved by Warrior Met. For the past five years we have not been paid premium pay for holidays worked even though these were moments and memories taken from us and our families.

The push to increase production and profits for investors at the expense of workers was amplified more with the four-strike policy implemented with the 2016 contract. All absences, late arrivals or early outs resulted in a strike. On the fourth occurrence you would be fired. This policy was a huge source of stress and worry for families. If you arrived a few minutes late you were still required to work your shift even though a strike had been given.

If you were involved in an accident, had a medical emergency, your child was sick or hospitalized, your spouse was in labor or hospitalized, it did not matter. If you could not give 24 hours notice you would receive a strike. My brothers and sisters have been given strikes for having accidents on the way to work and being late. Our spouses learned to not call to tell us about accidents or emergencies at home until after our shift out of fear that we would receive a strike. When my own daughter was in the hospital, I was working my 12-hour overnight shift, my wife was afraid to tell me she had been admitted until my shift ended at 7 a.m. because if I left I would receive a strike. I worked my shift in Brookwood then drove to the hospital and then drove back to the mines, back and forth for three days in order to be with my family.

These unfair practices and conditions led the UMWA rank and file membership to strike starting on April 1st of 2021. We are still fighting for a better contract for ourselves, our families, and our communities. We are waiting for Warrior Met, whose largest shareholder is BlackRock, to come to the table and offer a fair contract to those of us whose labor has been used to make them billions. This is why I am asking that you support “The Stop Wall Street Looting Act,” which will help to reform the private equity industry. This bill would help workers, families, and communities by forcing private investment firms like BlackRock to take responsibility for the actions of the companies they take over. Management at Warrior Met has stated, “we will starve them out” and “they aren’t worth anything else.” The investment firms that own Warrior Met need to be held accountable for these statements and the treatment workers have endured not only while on strike but for the past five years.

While the company I have helped make billions of dollars for over the past decade has turned their back on the workers during our strike, the UMWA has provided strike pay and major medical insurance for our families which has allowed us to keep holding the line and continue fighting for our rights. Other unions and other workers across the country have provided solidarity and direct support. The Auxiliary, made up of the families of the mineworkers, has worked tirelessly to bring in support for us to provide food, clothing, baby items, and holiday gifts to all striking families.

All workers deserve respect in our workplace and fair compensation for our labor. We will continue to fight for our UMWA brothers and sisters and we will continue to speak out against the exploitation of workers by companies funded by private equity groups. We will continue to stand up for ourselves but also for all the workers, families, and communities suffering under the same circumstances.

I have traveled with the UMWA to New York City to bring the strike to the doorstep of BlackRock and call on them to take action to support the workers and communities they invest in. BlackRock, Vanguard, and the other private equity owners have responded with silence. I would like to ask Congress to take action to ensure that workers and families do not continue to be the victims of these private equity firms who do not care if workers are pushed to the limits as long as they are receiving the highest return on investment possible. Thank you for allowing me to be here today and to share a glimpse of why we are striking in Brookwood.