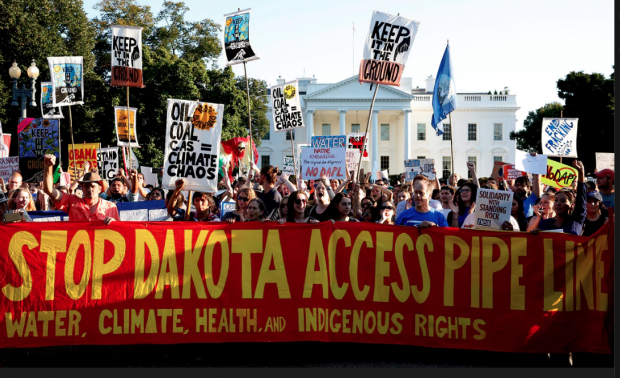 Above Photo: Protesters chant in opposition of the Dakota Access Pipeline on Pennsylvania Avenue in front of the White House. Photograph: Shawn Thew/EPA

It looks to Lori Glover “like a long snake going across the whole desert”. For David Keller, it is “like having a very beautiful historic home and having someone run a bulldozer through the kitchen”. And in Yolonda Blue Horse’s view, it is another example of disrespect from an industry that does not care about native people.

Before the Dakota Access pipeline sparked continuing protests that led to national attention and an Obama administration intervention, a feisty group of activists in remote west Texas waged a long battle against the same company when it pressed ahead with plans to run a 143-mile natural gas pipeline to Mexico through some of the state’s most pristine countryside.

The construction traffic, the diggers churning up ranchland and the serpentine sections of 42in pipe being placed along the route in preparation for their burial testify to their defeat, as do the fruitless legal challenges.

Activists held a march to show solidarity with the Dakota movement on Friday along the route in Alpine, a small town near the tourist magnet Marfa, a desert city 220 miles south-east of El Paso. It was supported by the American Indian Movement of Central Texas (AIMCTX), whose members have demonstrated against the Dakota pipeline outside the Dallas headquarters of Energy Transfer Partners, the company behind both schemes.

The Standing Rock Sioux tribe fears that the Dakota pipeline could damage their water supply. “This has really opened a lot of people’s eyes – pipelines everywhere – and has brought to life the number of pipelines that are bursting or leaking throughout the United States,” said Blue Horse, of the AIMCTX.

“My opinion is this – I think Kelcy Warren figures that my people, Native American people, are on the bottom of the totem pole when it comes to being a voice or being recognised at anything,” she said.

Warren is the billionaire CEO of Energy Transfer and he has amassed wealth and power as the mastermind of a vast pipeline network. According to Bloomberg: “Long considered a visionary in the energy infrastructure space, Warren made deals during the shale boom to piece together a 71,000-mile (114,239km) oil-and-gas superhighway that spans the country.”

His political networking is also impressive. The 60-year-old was a major donor to the election campaign of Texas governor Greg Abbott. Last year, Abbott appointed Warren to a seat on the Texas Parks and Wildlife Commission, the board of a state department whose mission is “to manage and conserve the natural and cultural resources of Texas”.

For the Trans-Pecos Pipeline, which is expected to be finished next year, Energy Transfer linked up with a company controlled by Carlos Slim, Mexico’s richest man.

On paper, perhaps, it did not seem likely to cause a fuss: relatively small and going through a sparsely populated area known as the Big Bend. Its proponents argue that it brings jobs and will reduce Mexico’s dependence on coal.

But it slices through a region of natural beauty beloved by its residents precisely because it was untouched by the large-scale oil and gas developments that dominate much of a state with about 432,000 miles of pipeline.

And, critics charge, there is no real national benefit, since the gas is headed for Mexico, to take advantage of recent energy industry reforms there.

As well as environmental and economic concerns, the fight against the Trans-Pecos pipeline also spotlighted Texas’s oil and gas industry regulations – or rather, the lack of them. Until recently, companies were able to assert their pipelines were for the public good simply by checking a box on a one-page form filed with the relevant state agency, the railroad commission. In essence, the commission registers new pipelines without judging whether they are needed or whether the route is appropriate.

Once they have “common carrier” status, the company can use the power of “eminent domain” to route through private property over the objections of landowners, who have to resort to court action if they cannot come to an agreement with the company.

“We’re sick of being pushed around,” said Glover, one of the organisers of Friday’s march. “Our community rights, our individual rights, our property rights, our environmental rights, are all very important and we need to live in a country that values those things.

“If you look at a map of the United States and all the pipelines, it’s crazy. Pipelines cover our country and they’re just making more and more and it’s at a frantic pace. And I don’t think that they can do that safely, to be in such a rush to get all the natural resources out and then do that in a way that guarantees the safety of the community and the environment. It’s not possible.”

Putting the brakes on the energy industry is a tall order in a Republican-dominated state whose politicians are relentlessly supportive of oil and gas concerns. When Denton, near Dallas, outlawed fracking inside city limits, state lawmakers responded last year by banning the ban.

“The deck was stacked against us from the start. We really didn’t stand a chance,” said Keller, a local archaeologist and member of the Big Bend Conservation Alliance. “I think it’s just capitalism gone wild; I’m not a socialist at all.”

He lamented that rather than modifying the route by 50 or 100 metres, the diggers “ploughed right through” what he described as a “very significant” historical site that is between 5,000 and 12,000 years old and could contain notable Native American artefacts – Trap Spring, which he described as now looking like a home without a kitchen.

An Energy Transfer spokeswoman denied the allegation and said: “We adjusted the route so that this site is not within the boundaries of our right-of-way for this project. There are no archeological sites within the pipeline right-of-way along the entire route.”

She added that the pipeline “will meet or exceed where possible all state and federal safety standards”.

Activists worry that the Trans-Pecos pipeline will be the first of many. “It’s the camel’s nose under the tent. It’s basically the first of a much larger set of enabling infrastructure that will allow the industrialisation of this region,” said another Alliance member, Coyne Gibson.

Last year a company pitched the idea of placing a nuclear waste storage facility in the region.

There have long been plans to build a major highway through the Big Bend, connecting Mexico to the oil-patch cities of Midland and Odessa and beyond. In September, Apache Corporation excitedly announced it has discovered a field in west Texas near the Davis Mountains that it dubbed Alpine High. It could potentially yield the equivalent of billions of barrels of oil.

“Pipelines beget pipelines, infrastructure begets infrastructure,” said Keller. “Pipelines, as one landowner out here put it, they’re just bait for other pipelines, and the oil and gas industry and that is the last thing we need here. This is the beginning of the destruction, the beginning of the end of the Big Bend, as I see it. It’s the most damaging thing that’s probably ever happened in the history of the region.”