Above Photo: Greenpeace protesters shutdown the Houston Ship Channel for several hours on Sept. 12 by hanging from a bridge. They were arrested and charged under a new law that specifically targets people protesting pipelines or other fossil fuel infrastructure. Credit: Greenpeace

This could be the first test of a wave of laws enacted in several states in recent years targeting protests over pipelines and other fossil fuel infrastructure.

A group of activists who shut down one of the nation’s largest oil ports by hanging off a bridge over the Houston Ship Channel have been charged under a new Texas law that imposes harsh penalties for disrupting the operations of fossil fuel infrastructure.

The charges could present the first test for a wave of similar state laws that have been enacted around the country over the past three years in response to high-profile protests against pipelines and other energy projects.

More than two-dozen Greenpeace activists were arrested in Harris County after a number of them dangled from a bridge on Sept. 12 holding banners with the aim of blocking oil and gas tankers from passing through a busy shipping channel below.

The Texas law they were charged under was based on a model bill promoted by the American Legislative Exchange Council, an industry-backed group.

Lawmakers in at least 16 states have introduced versions of the bill over the past three years. Seven states have enacted them as law, according to the International Center for Not for Profit Law, and Iowa and South Dakota have enacted different bills with similar aims. The U.S. Department of Transportation earlier this year also proposed that Congress enact similar language into federal law.

The bills create harsh criminal penalties for people who trespass on pipelines or other “critical infrastructure” facilities, and several of them allow for steep fines of up to $1 million for organizations that support people who violate the laws.

Oil and gas industry groups have lobbied in favor of the bills, part of an effort to ratchet up pressure on protesters.

Environmental and civil liberties advocates have argued that the bills are an effort to stifle free speech and legitimate protest, noting that people who trespass can already be charged under existing laws.

“This is a bullying tactic that serves the interests of corporations at the expense of people exercising their right to free speech,” said Tom Wetterer, general counsel of Greenpeace USA, in a statement.

In Texas, 26 people who were charged under the new law in connection with the bridge protest could face two years in prison and fines of up to $10,000, according to Travis Nichols, a Greenpeace spokesman. The organization itself could face a fine of up to $500,000 under the new state law, though Nichols said it has not been charged. Many of the protesters also face federal charges.

The Harris County District Attorney’s Office did not immediately respond to questions for this article. Sean Teare, a Harris County prosecutor, told Reuters, “This action cost our community many, many millions of dollars in lost commerce.” 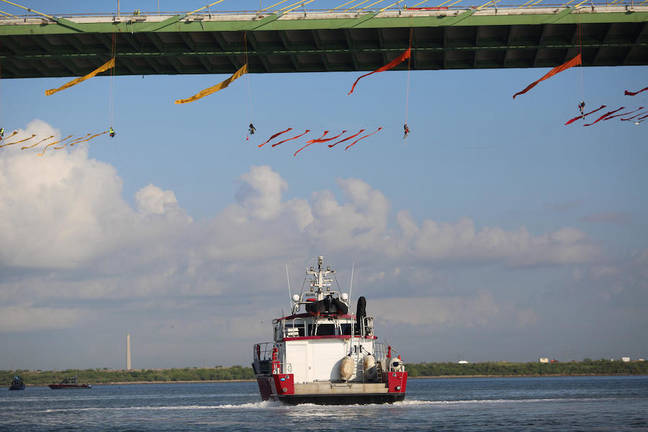 Greenpeace USA climbers form a blockade on the Fred Hartman Bridge in Baytown, Texas shutting down the largest fossil fuel thoroughfare in the United States ahead of the third Democratic primary debate in nearby Houston. The climbers are preventing the transport of all oil and gas through the Houston Ship Channel, home to the largest petrochemical complex in the United States. Their action is a call to the country’s present and future leaders to imagine a world beyond fossil fuels and embrace a just transition to renewable energy.

The charges appear to be the first under any of the new laws targeting fossil fuel infrastructure protesters.

The first “critical infrastructure” bill was enacted in Oklahoma in 2017 as activists there were gearing up to fight plans for an oil pipeline. While more than a dozen people have been arrested under the law in Louisiana, as part of protests against an oil pipeline there, none has been charged yet. Several of the people arrested there have joined a constitutional challenge to Louisiana’s law, which is pending in federal court, said Bill Quigley, a lawyer representing some of the activists.

The Texas protest was timed with the Democratic presidential debate in Houston. But it also came less than two weeks after the new law, signed by Gov. Greg Abbott in June, went into effect.

Nicole Debord, Greenpeace’s legal counsel, said in an email that the group was waiting to see what evidence prosecutors provide, but that the law is “ripe for challenge.”