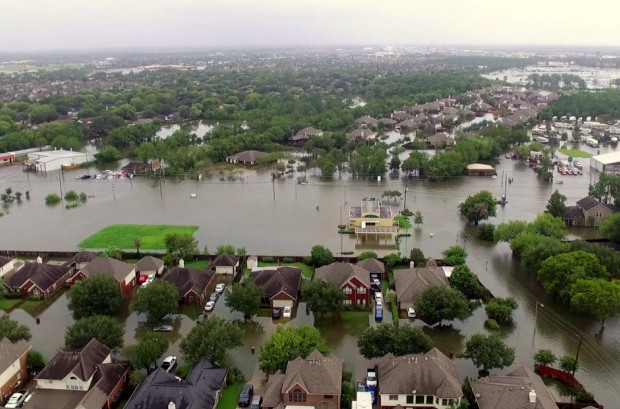 As unrelated as Israeli settlements in Palestine and hurricane relief aid in Dickinson, Texas may seem to be, the small town has taken its cue from the statehouse in yoking them in the form of a refusal of Harvey relief aid to any supporter of a boycott protesting Israel’s illegal acts.

DICKINSON, TX — The town of Dickinson, Texas is home to just over 20,000 people, an annual crawfish festival, and one of the most absurd requirements for disaster relief imaginable.

The town recently made non-support of the Boycott, Divestment, Sanctions (BDS) campaign a condition for receiving hurricane aid. How can a small town like Dickinson put forth such a gratuitous disaster relief requirement? In this case, the apple doesn’t fall far from the tree — Dickinson is simply following in the footsteps of the entire state of Texas.

Recently, Texas banned any contractor who supports the BDS campaign from receiving state funds. In the opinion of Texas Governor Greg Abbott, anti-Israel policies are anti-Texas policies. Despite the head-scratching nature of that claim, at least to many critics in- and out-of-state, House Bill 89 was signed into law in July.

The bill specifies that the state may enter into a contract with a business only if that business does not boycott Israel. The bill also takes the extra step of specifying that businesses must “not boycott Israel during the term of the contract” either. The legislation also prohibits the state from entering into a contract with a business that refuses to buy products made in Israeli settlements — settlements that are illegally located on Palestinian land.

The city of Dickinson has taken the spirit of the bill a step further by refusing funds for disaster relief recipients supporting BDS. Brian Hauss, an American Civil Liberties Union (ACLU) attorney, told the Intercept:

The City of Dickinson seems to be enforcing a Texas law that requires any state contractor, apparently including disaster relief recipients, to certify that they are not participating in boycotts of Israel.”

Andre Segura, Legal Director of the ACLU of Texas, said of the requirement by Dickinson:

[It] is an egregious violation of the First Amendment, reminiscent of McCarthy-era loyalty oaths requiring Americans to disavow membership in the Communist party and other forms of ‘subversive’ activity.”

The ACLU has criticized Dickinson’s requirement for relief as a violation of free speech rights, as the right to boycott is protected under the First Amendment.

Apart from these First Amendment considerations, Dickinson was one of the worst-hit towns in the entire state, making the need for aid especially urgent, and its withholding in fealty to any political agenda especially problematic.