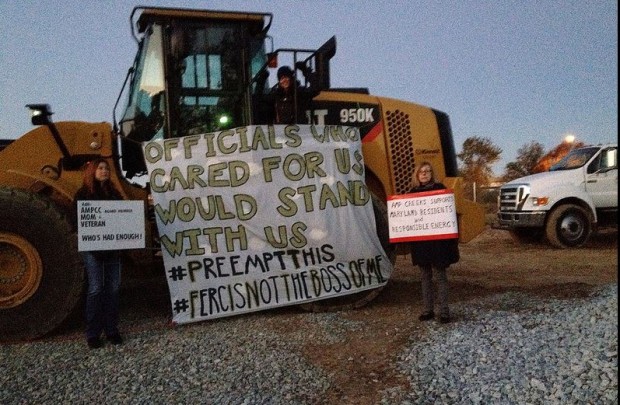 Note: We wrote about the sentencing of Heather Doyle to 40 days in the Calvert County Detention Center for her efforts to stop the construction of a fracked gas terminal at Cove Point, Maryland. We urge you to send her a letter and thank her for taking action to protect the community of Lusby and other communities in the Cove Point area, to stop the export of fracked gas and stop the planet from reaching the tipping point on climate.

On April 20th, Heather Doyle plead guilty to her actions at Dominion’s Cove Point LNG export terminal in Lusby, Maryland on Feb. 3, in which she trespassed onto a construction site and scaled the arm of a crane to drop a banner that read, “Dominion get out. Don’t frack Maryland. No gas exports. Save Cove Point.”

Doyle, 31, did not accept probation and instead chose to go to jail. Judge John E. Nunn of the Calvert County Court sentenced Doyle 40 days, which she is now serving. In his statement the judge said he was sympathetic to the environmental movement, but did not understand why Doyle and her fellow crane-climber, Carling Sothoron, needed to scale construction equipment to make their point.

Writing letters and signing petitions only go so far, and in some cases, like Seneca Lake and Cove Point, our only remaining option is to speak with our bodies.

The following is a letter I wrote to Doyle. I wanted to share it on my blog to bring attention to her valiant efforts to protect what she loves, and her self sacrifice for a greater good. I hope sharing this will also bring attention to Dominion’s ill-fated intentions to construct the first LNG export facility on the East Coast.

The first time I ever risked arrest was in the summer of 2013 outside of the State Department in Washington, D.C. It was to protest the Keystone XL Pipeline. I was the youngest person in the group that staged a sit-in outside of the building.

We were not arrested that day, but I could not have been happier. I met so many amazing people, and our action brought a lot of attention to the issue. There was a French news station there, which I thought was pretty cool.

At one point, I looked out across the crowd of supporters and saw a young man holding a sign. It read, “Thank You Climate Heroes!”

I was so touched by that, and I started to cry. I had never considered my actions to be heroic. I was just doing what I felt I needed to do to protect my future. I didn’t get to meet that young man at the time, but a year later when I joined the Great March for Climate Action walking from L.A. to D.C., I would realize that my fellow Marcher Lee Stewart was that young man. My opportunity to thank him for that sign came a year later.

Heather, I want to thank you for being a climate hero, even though you and I haven’t formally met yet. I hope I can meet you when I come to D.C. in May and thank you in person.

What you did on February 3rd at the Cove Point LNG export facility was far braver than my attempt to disrupt the State Department back in 2013. You scaled a crane! Your act at “Offsite A” with Carling Sothoron was truly commendable and inspiring, and when I heard you had been sentenced 40 days in jail I was very touched. You have made a huge sacrifice to stand up for something you believe in, and I hope your actions and commitment will encourage others to step outside of their comfort zones and take a stand. Fear of stepping away from normal, structured life holds many back from taking greater action.

Recently, I interviewed a student activist, and in response to one of my questions, he talked about me. I’ve never had that happen before, where someone turned the interview around to me. I wanted to share with you what he said to me, because when I think back on it now, it makes me think of you.

“People, I think, are afraid to step out of normal limits. But I think that you’re the best example of somebody on campus who has stepped out of being afraid to do things the normal way, who has stepped out of the scope of being afraid, in a way. You have decided that you want to make such a difference. That you’ll go above and beyond what the normal person is willing to consider. The second that someone says arrest, they don’t want you to talk about it anymore, they want you to leave. They believe that that’s somehow going to be a burden on them for the rest of their lives, and obviously that’s not true.”

He went on to say that this hesitancy to act is a part of a broader system that works to suppress people from talking about major issues and taking direct actions.

Thank you, Heather, for going against the grain. A revolution can’t start until someone, or a few someones, turn around and start walking against the masses. It’s hard at first, and slow-going, when there’s just a few. But until someone takes that first step, change just cannot happen. Thank you for being one of those people.

Things are going to get harder before they get better. According to Mohandas Gandhi, the progression goes like this: first they ignore you, then they laugh at you, then they fight you and then you win.

“They” — the industry, the government — have started to fight us, but quietly.

“The number one domestic terrorism threat is the eco-terrorism, animal rights movement.” These are the words of FBI official John Lewis, who specialized in domestic terrorism. We can see this mentality in the way Vera Scroggins is being treated by our so-called “justice system” for offering tours of fracking wells in Pennsylvania.

Your decision to go to jail is launching this issue into a broader sphere in a way that can’t be ignored. Thank you for making a personal sacrifice for a greater good. I hope my letter is one of many you will receive that will show how much your actions have impacted others like me.

I hope your message is not just heard by the general population, but also “they” who are fighting us. I hope your actions and the actions of others, slowly increasing and expanding, will show them this isn’t going away, and we aren’t backing down.

It’s our future, and we only have this planet. We do not have the choice to back down.

You have all of my love and support during your incarceration. I hope you can use this time for reflection and meaningful growth.

With love from Seneca Lake,