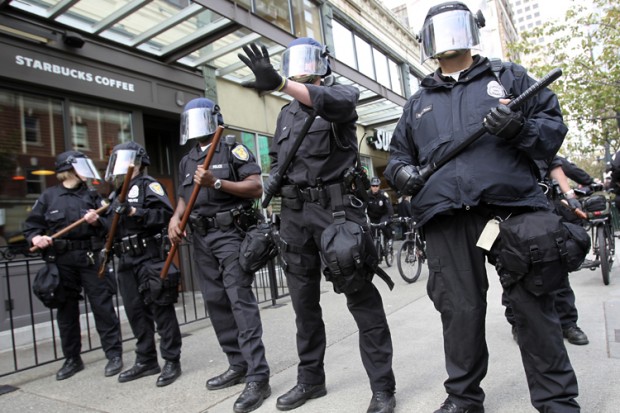 The Absurdity Of Being A Citizen In The US Police State

In the American police state, the price to be paid for speaking truth to power (also increasingly viewed as an act of treason) is surveillance, censorship, jail and ultimately death.

However, where many Americans go wrong is in assuming that you have to be doing something illegal or challenging the government’s authority in order to be flagged as a suspicious character, labeled an enemy of the state and locked up like a dangerous criminal.

In fact, as I point out in my book Battlefield America: The War on the American People, all you really need to do is use certain trigger words, surf the internet, communicate using a cell phone, drive a car, stay at a hotel, purchase materials at a hardware store, take flying or boating lessons, appear suspicious, question government authority, or generally live in the United States.

With the help of automated eyes and ears, a growing arsenal of high-tech software, hardware and techniques, government propaganda urging Americans to turn into spies and snitches, as well as social media and behavior sensing software, government agents are spinning a sticky spider-web of threat assessments, flagged “words,” and “suspicious” activity reports aimed at snaring potential enemies of the state.

It’s the American police state’s take on the dystopian terrors foreshadowed by George Orwell, Aldous Huxley and Phillip K. Dick all rolled up into one oppressive pre-crime and pre-thought crime package.

What’s more, the technocrats who run the surveillance state don’t even have to break a sweat while monitoring what you say, what you read, what you write, where you go, how much you spend, whom you support, and with whom you communicate. Computers now do the tedious work of trolling social media, the internet, text messages and phone calls for potentially anti-government remarks—all of which is carefully recorded, documented, and stored to be used against you someday at a time and place of the government’s choosing.

While this may sound like a riff on a bad joke, it’s a bad joke with “we the people” as the punchline.

The following activities are guaranteed to get you censored, surveilled, eventually placed on a government watch list, possibly detained and potentially killed.

Laugh at your own peril.

Use a cell phone: Simply by using a cell phone, you make yourself an easy target for government agents—working closely with corporations—who can listen in on your phone calls, read your text messages and emails, and track your movements based on the data transferred from, received by, and stored in your cell phone. Mention any of the so-called “trigger” words in a conversation or text message, and you’ll get flagged for sure.

Drive a car: Unless you’ve got an old junkyard heap without any of the gadgets and gizmos that are so attractive to today’s car buyers (GPS, satellite radio, electrical everything, smart systems, etc.), driving a car today is like wearing a homing device: you’ll be tracked from the moment you open that car door thanks to black box recorders and vehicle-to-vehicle communications systems that can monitor your speed, direction, location, the number of miles traveled, and even your seatbelt use. Once you add satellites, GPS devices, license plate readers, and real-time traffic cameras to the mix, there’s nowhere you can go on our nation’s highways and byways that you can’t be followed.

Attend a political rally: Enacted in the wake of 9/11, the Patriot Act redefined terrorism so broadly that many non-terrorist political activities such as protest marches, demonstrations and civil disobedience were considered potential terrorist acts, thereby rendering anyone desiring to engage in protected First Amendment expressive activities as suspects of the surveillance state.

Express yourself on social media: The FBI, CIA, NSA and other government agencies are investing in and relying on corporate surveillance technologies that can mine constitutionally protected speech on social media platforms such as Facebook, Twitter and Instagram in order to identify potential extremists and predict who might engage in future acts of anti-government behavior.

Serve in the military: Operation Vigilant Eagle, the brainchild of the Dept. of Homeland Security, calls for surveillance of military veterans returning from Iraq and Afghanistan, characterizing them as extremists and potential domestic terrorist threats because they may be “disgruntled, disillusioned or suffering from the psychological effects of war.”

Disagree with a law enforcement official: A growing number of government programs are aimed at identifying, monitoring and locking up anyone considered potentially “dangerous” or mentally ill (according to government standards, of course). For instance, a homeless man in New York City who reportedly had a history of violence but no signs of mental illness was forcibly detained in a psych ward for a week after arguing with shelter police.

Call in sick to work: In Virginia, a so-called police “welfare check” instigated by a 58-year-old man’s employer after he called in sick resulted in a two-hour, SWAT team-style raid on the man’s truck and a 72-hour mental health hold. All of this was done despite the fact that police acknowledged they had no legal basis nor probable cause for detaining the man, given that he had not threatened to harm anyone and was not mentally ill.

Limp or stutter: As a result of a nationwide push to certify a broad spectrum of government officials in mental health first-aid training (a 12-hour course comprised of PowerPoint presentations, videos, discussions, role playing and other interactive activities), more Americans are going to run the risk of being reported for having mental health issues by non-medical personnel. For instance, one 37-year-old disabled man was arrested, diagnosed by police and an unlicensed mental health screener as having “mental health issues,” apparently because of his slurred speech and unsteady gait.

Appear confused or nervous, fidget, whistle or smell bad: According to the Transportation Security Administration’s 92-point secret behavior watch list for spotting terrorists, these are among some of the telling signs of suspicious behavior: fidgeting, whistling, bad body odor, yawning, clearing your throat, having a pale face from recently shaving your beard, covering your mouth with your hand when speaking and blinking your eyes fast.

Allow yourself to be seen in public waving a toy gun or anything remotely resembling a gun, such as a water nozzle or a remote control or a walking cane, for instance: No longer is it unusual to hear about incidents in which police shoot unarmed individuals first and ask questions later. John Crawford was shot by police in an Ohio Wal-Mart for holding an air rifle sold in the store that he may have intended to buy. Thirteen-year-old Andy Lopez Cruz was shot 7 times in 10 seconds by a California police officer who mistook the boy’s toy gun for an assault rifle. Christopher Roupe, 17, was shot and killed after opening the door to a police officer. The officer, mistaking the Wii remote control in Roupe’s hand for a gun, shot him in the chest. Another police officer repeatedly shot 70-year-old Bobby Canipe during a traffic stop. The cop saw the man reaching for his cane and, believing the cane to be a rifle, opened fire.

Appear to be pro-gun, pro-freedom or anti-government: You might be a domestic terrorist in the eyes of the FBI (and its network of snitches) if you: express libertarian philosophies; exhibit Second Amendment-oriented views; read survivalist literature, including apocalyptic fictional books; show signs of self-sufficiency (stockpiling food, ammo, hand tools, medical supplies); fear an economic collapse; buy gold and barter items; voice fears about Big Brother or big government; or expound about constitutional rights and civil liberties.

Attend a public school: Microcosms of the police state, America’s public schools contain almost every aspect of the militarized, intolerant, senseless, overcriminalized, legalistic, surveillance-riddled, totalitarian landscape that plagues those of us on the “outside.” Additionally, as part of the government’s so-called ongoing war on terror, the FBI—the nation’s de facto secret police force—is now recruiting students and teachers to spy on each other and report anyone who appears to have the potential to be “anti-government” or “extremist” as part of its “Don’t Be a Puppet” campaign.

Speak truth to power: Long before Chelsea Manning and Edward Snowden were being castigated for blowing the whistle on the government’s war crimes and the National Security Agency’s abuse of its surveillance powers, it was activists such as Martin Luther King Jr. and John Lennon who were being singled out for daring to speak truth to power. These men and others like them had their phone calls monitored and data files collected on their activities and associations. For a little while, at least, they became enemy number one in the eyes of the U.S. government.

There’s always a price to pay for standing up to the powers-that-be.

Yet as this list shows, you don’t even have to be a dissident to get flagged by the government for surveillance, censorship and detention.

All you really need to be is a citizen of the American police state.