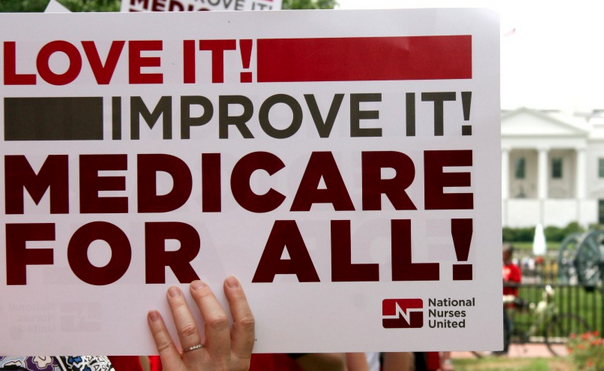 Comment by Don McCanne, MD of Physicians for a National Health Program

The performance of competing private insurance plans within the ACA exchanges is not much different from the performance of the pre-ACA private plans in the individual market. Trends in higher insurance costs, greater cost sharing, and narrower choices were already occurring, and they continue to grow progressively worse. Access and affordability can only suffer.

Higher premium credits and out-of-pocket subsidies are helping individuals with incomes near poverty levels, but, for middle-income families, they are inadequate to provide much benefit.

Higher premiums and more cost-shifting to patients are adequate to maintain profits for most larger insurers, but where even these measures are inadequate, insurers are pulling out of the exchanges, and some of the smaller insurers are even folding. Market manipulations create instability.

The insurers show their true colors through statements such as that of Anthem’s Chief Financial Officer Wayne Deveydt. Reporting to Wall Street analysts, Deveydt said about the market, “When you have fewer national enrollees and you have price points that we don’t believe are sustainable, we’ve just made a conscious decision we’re not going to chase it.”

Higher premiums, greater cost-sharing, narrower networks – the behavior of the private insurers is not changing in spite of the promise of higher value and lower costs through the ACA Marketplaces. The ACA exchanges are a creeping failure that is growing worse.  Congress enacted the wrong model of reform. We need single payer.

Many people shopping for health coverage this weekend on the websites created by Obamacare are going to see double-digit percentage increases in their premiums. That’s still not enough for some insurers.

Anthem Inc. says there remain competitors in the government-run marketplace offering premiums that aren’t enough to profitably provide the coverage patients will require. Prices in some areas probably will have to climb in 2017 and even 2018 to reach levels that make sense, according to Chief Financial Officer Wayne Deveydt. Meantime, Anthem will sacrifice market share to keep its plans profitable, he said.

“When you have fewer national enrollees and you have price points that we don’t believe are sustainable, we’ve just made a conscious decision we’re not going to chase it,” Deveydt told analysts on a conference call on Wednesday. “We are going to need to be patient until this works itself out.”

Deveydt’s remarks spotlight a problem for the Patient Protection and Affordable Care Act’s marketplaces as the third annual sign-up period begins Sunday. Set prices too low to lure customers, and losses can mount. Some smaller firms already have closed, and some bigger insurers have withdrawn from markets — such as Aetna Inc., which will offer coverage in two fewer states this year.

The conundrum has led to this year’s price increases, which have been higher, on average, than last year’s hikes. But the danger is that premiums are now too expensive for some families to afford coverage, especially the uninsured people the Obama administration is trying to persuade to shop on the exchanges for the first time.

“Exchanges have had their challenges,” said Ana Gupte, an analyst at Leerink Partners who follows health-care companies. “The growth has been reasonable, depending on where you priced, but the margins have been a little less compelling.”

Insurers have benefited in many ways since the Affordable Care Act was signed into law in 2010. About 17.6 million people have gained insurance coverage, mainly through the health-insurance marketplaces and an expansion of Medicaid, the U.S.’s program with states to cover low-income people. The insurance companies administer coverage for much of that population, and their stocks have soared in the past few years on the growth in their rolls.

But the remaining uninsured are poorer and younger than those who’ve already signed up, and they’re more difficult to reach, Health and Human Services Secretary Sylvia Mathews Burwell has said. That may mean slower growth for the insurers.

Prices on the Affordable Care Act’s marketplaces are going up faster than inflation or wages. By one measure, premiums for mid-level plans are climbing at least 7.5 percent in 37 states where consumers use the U.S.-run HealthCare.gov website to buy coverage.

Charles Gaba, who tracks the health law on ACASignups.net, estimates that the rate increases across the U.S. will average about 12 percent to 13 percent, based on a weighted average of current enrollment. That means there are lots of consumers who are seeing higher rates and could benefit from re-examining their options as the sign-up period starts.

“Some of the large carriers are having pretty significant rate increases,” said Jeff Smedsrud, who runs the private insurance shopping site Healthcare.com. “Consumers should not automatically auto-renew. They should take the five to 10 minutes that it takes to compare” plans.

Subsidies help lower the actual costs for many. Almost 80 percent of individuals who’ve previously bought coverage on the Obamacare website will be able to find a plan for less than $100 a month after subsidies, the government has said.

In fact, those who are eligible for the biggest subsidies are more likely to enroll than people who have to foot more of the bill themselves, according to a report from the Robert Wood Johnson Foundation and the Urban Institute.

“There is no larger factor than affordability in terms of determining whether people do or don’t get enrolled,” said Ron Pollack, the head of Families USA, a health-care advocacy group.

The health department has updated the HealthCare.gov website to highlight how subsidies can reduce the cost of coverage. The site also can help individuals see how their choice of plans affects what they could end up spending out of pocket on health care.

“We’re doing everything possible to make it easier for the consumer,” Burwell said Thursday. “When we move on to an educated consumer, that’s when the marketplace works.”

Price isn’t the only challenge for insurers, according to Shawn Guertin, Aetna’s CFO. Membership levels are lower than expected, and some individuals are sticking with pre-Obamacare plans, cutting into the size of the market. There’s also been lots of churn — customers signing up and then dropping their policies throughout the year.

“We always knew this was going to be a multiyear proposition, for a new program of this size and scale,” Guertin said in an interview.

Aetna hasn’t been turning a profit in Obamacare plans, the company has said. Guertin said its price hikes range from high single digits to the mid-teens, depending on the market. UnitedHealth Group Inc., the largest U.S. health insurer, has said its premium increases are in the double digits as well.

Still, UnitedHealth is entering 11 new markets this year. And overall, about as many insurers are entering the exchanges are are quitting, according to data released Friday by the health department.

Consumers buying coverage on HealthCare.gov have an average of five issuers to choose from for 2016 coverage, about the same as last year, HHS said. Yet in six of the 38 states using HealthCare.gov, consumers will have just one or two insurers to pick from.

The big publicly traded companies will pick up membership over the next few years as they outlast small competitors like the consumer operated and oriented plans known as co-ops, which have set prices at unprofitable levels, according to Gupte, the Leerink analyst. Already, money-losing co-ops such as Health Republic Insurance of New York and CoOportunity Health in Iowa have had to close.

“The issues have been more around the very small plans, the new entrants, the co-ops,” she said. “As we see more of them exiting, I think the pricing environment will harden.”