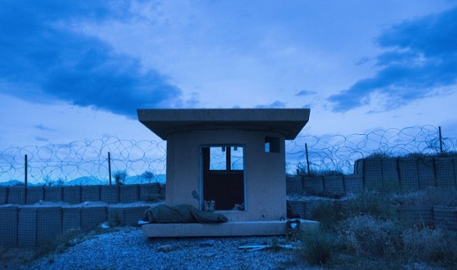 The Afghan Guantanamo Continues Despite WIthdrawal

Bagram airfield, Parwan. The US holds about 50 non-Afghan detainees at a facility on the outskirts of the base. Photograph: Brendan Smialowski/AFP/Getty Images

President Barack Obama’s decision to keep American troops in Afghanistan until 2016 is likely to mean two more years behind bars for America’s most secret detainee population, according to Pentagon officials.

On the outskirts of the massive Bagram airfield, about an hour’s drive from the capital of Kabul and in what the military calls the Detention Facility in Parwan, the US holds about 50 prisoners. The government has publicly disclosed nearly nothing about them, not even their names, save for acknowledging that they are not Afghans.

These are the last detainees the US holds in the Afghanistan war. It relinquished hundreds of Afghan detainees, and almost all of the detention facility, to Afghan control last year. Sometimes called, in military parlance, “Enduring Security Threats”, the non-Afghans have posed a dilemma for the Department of Defense for years, as officials pondered what to do about them ahead of a pullout that had been anticipated for December 2014.

The military has considered charging some of them in federal court and, reportedly, at least one before a military tribunal. It has debated transferring them to other countries for continued detention. It has pondered simply letting them go when hostilities officially end. But those discussions have become bogged down, an inertia now added to by Obama’s announcement of an extended US troop presence.

“The United States will continue to have legal authority to detain individuals from al-Qaida, the Taliban and associated forces until the end of the armed conflict as a matter of international law,” said Lieutenant Colonel Todd Breasseale, the Pentagon spokesman for detainee matters.

“We will continue to evaluate the appropriateness of detaining the Enduring Security Threats as we move towards the end of 2016.”

Should the next Afghan president unexpectedly reject a continued US troop presence, the military would have to reach a decision quickly, before US combat operations end in December. But the two leading candidates for the presidency have endorsed a bilateral accord on a residual US force, suggesting the US will retain the physical infrastructure to continue to hold the non-Afghans, and at least the tacit blessing of the Afghan government.

Now that Obama has announced that he intends to extend the US presence in Afghanistan for another two years, to include what he described as a “narrow” counterterrorism mission, the Pentagon lacks the bureaucratic impetus to resolve the fate of the non-Afghan detainees, a Defense official said, on condition of anonymity.

Neither the Pentagon nor the military’s detentions command in Afghanistan has disclosed much about the non-Afghan detainees held at Parwan. The cohort, which is believed to include Pakistanis, Yemenis, Tunisians, Uzbeks and Russians, is made up of people whom the military suspects are tied to the coterie of extremist groups, some with ties to al-Qaida’s allies, present in Afghanistan. Most are are believed to have been either captured in Afghanistan or transferred there by the CIA.

Some non-Afghan detainees at Parwan are believed to have been held since 2002, during the early months of the war, much like detainees held at Guantánamo Bay. But the name of every detainee at Guantánamo is now public and US courts have long held Guantánamo detainees can challenge their capture legally. They are visited by lawyers and human-rights advocates, and have even written New York Times op-eds. Their cases attract worldwide attention.

Non-Afghans at Parwan in US custody enjoy almost none of those rights. They receive visits from the International Committee of the Red Cross, which has arranged phone calls with their families, the source of the vast majority of information about them. Beyond that, the non-Afghans at Parwan are functionally invisible to the outside world.

The residual section of Parwan remaining in US control is “absolutely more secretive” than Guantánamo, said Tina Foster, a lawyer and executive director of the International Justice Network, one of a select few to attempt representation of the non-Afghans at Parwan.

“There’s absolutely no transparency for this prison population. Neither you or any of us would know anything about it if not for family members coming forward.”

The administration is obligated under last year’s defense funding authorization bill to send Congress a classified report providing biological information and other data on the non-Afghans. It does not appear the report has yet been sent to the Hill.

“It’s certainly possible that the president’s declaration of the end of US combat involvement in Afghanistan will prompt courts for the first time to assert jurisdiction over lingering military detentions there,” said Robert Chesney, a law professor at the University of Texas.

“And if they do, it’s also possible courts will conclude that our detention authority has expired, if we’re not involved in combat as the president says.”

US military officials involved in the debate fear that releasing some of the non-Afghans will result in the release of people with either American blood on their hands or who pose a future threat. The case of Ali Musa Daqduq looms large: Daqduq, whom US officials suspected of ties to Lebanese Hezbollah and Iran, and a deadly 2007 attack on US soldiers in Iraq, was turned over to Iraqi custody when the US war in Iraq ended. The Iraqi government, to the enduring bitterness of the US military, freed him.

Yet, as with Daqduq, the US has few obvious legal mechanisms for continuing to detain the non-Afghans once the Afghanistan war expires. Traditionally, battlefield detention ends once the war does. But in 2012 Jeh Johnson, then the Pentagon’s top lawyer and now the homeland security secretary, mused that US detention authorities might outlast the wars upon which they are predicated.

Foster is petitioning the supreme court to take up a habeas corpus case for some of the non-Afghan detainees, known as Maqaleh v Hagel. While the case has thus far been unsuccessful, the imminent end of the formal US combat mission in December may change its fortunes.

“The entirety of the US government’s defense to this is it’s not indefinite detention, it’s only detention until we’re out of the detention game in Afghanistan when we’re done with combat,” Foster said.